Larry and I have returned from our one week ballpark road trip.  Thanks to all of our friends (and my daughter) who joined us at the parks, shared meals and gave us wayward souls shelter.  Five of the six games went down to the 9th inning.  Except for the Phillies-Red Sox game we purchased our tickets at the ballpark and for the major league games we got terrific seats on the third base side near the dugout for between $36 and $48.  We also stopped by Gettysburg, The Rock n Roll Hall of Fame, Charlottesville and Annapolis.


Pittsburgh
Since this is about baseball we'll need to look at the key stats: 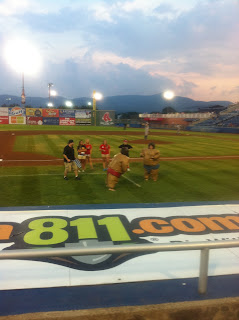 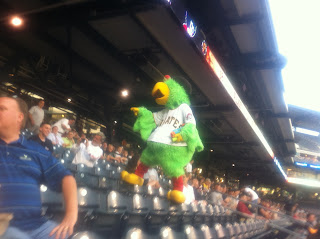 Most Convenient To Stuff Outside Ballpark: Cleveland (Walk out the park and you are at the restaurants & bars downtown)

Best Parts of the Drive Between Ballparks:
Number of Coyotes Seen Crossing Roads:  1 (US 60 in Ohio)

Funkiest Throwing Motion:
Pitcher:  Kyle Bellamy who pitched the 8th and 9th innings for Winston Salem and had a sidearm/underarm thing going that almost had both his legs on the ground during various parts of his motion
Non-Pitcher:  Hunter Pence (Phillies Outfielder) - is his arm injured?
Cleveland
Most Dramatic Moment:  Walk off Home Run by Todd Frazier to win the game for the Cincinnati Reds

Best Catch:  Ryan Sweeney (Boston).  With 2 on and 2 out in the bottom of the 7th and the Phillies trailing 7-4, Carlos Ruiz hit a line drive to the gap in right-center on which Sweeney made a diving catch at the warning track, right in front of our seats.

Funniest Fielding Play:  Brandon Phillips (Cincinnati).  With two out, and Atlanta runners on 1st and 2nd in the top of the 7th in a 1-1 game, Michael Bourn hit a grounder to Phillips on the first base side of second.  Phillips made a sliding stop, rolled around for awhile, bobbled the ball and eventually shuffled it to the shortstop covering second to get the out.  Seemed like the play took about 10 minutes.  Phillips was laughing as he ran off the field.  You can watch it at mlb.com

Most Frustrating Game for a Hometown Fan:  Phillies-Red Sox game in which the Phillies had 12 baserunners in the last five innings and only scored once, losing the game 7-5.

Clutch Relief Performance:  Chris Perez (Cleveland) who with two men on base struck out Miguel Cabrera and got Prince Fielder on a grounder in the 9th to preserve the Indians victory over the Tigers.

Best Throw By Fielder:  Brennan Boesch (Detroit).  The Indians had the bases loaded with one out in the bottom of the 8th when Asdrubal Carbera hitter a liner to right field which Boesch caught and then threw a bullet to cut down Casey Kotchman at the plate.  You can watch it on mlb.com

Biggest Comeback:  The Pirates down 4-0 to the Mets and Johan Santana came back to win 5-4. 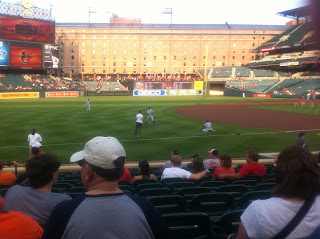