Inspired by Joe Posnanski's recent post on Sandy Koufax and an observation by Bill James a few days ago about Sandy and Dazzy Vance.

Sandy Koufax never pitched in or won a major league game after he turned 30 when his career was ended by an elbow injury.


Dazzy Vance's major league career was derailed at the start by an elbow injury and he did not win a major league game before he turned 31.


Both are in the Hall of Fame.


They are the two greatest pitchers in the history of the Dodgers (though Van Lingle Mungo still has the best name and definitely the best song of any Dodger pitcher).


Arthur Charles Vance was born in rural Iowa in 1891 and raised in Nebraska.  He began his professional baseball career in 1912, briefly reaching the majors in 1915 (with the Pirates and Yankees, going 0-3 in 30 innings with an ERA of 4) and again in 1918 (with the Yankees, pitching only 2 1/3 innings with an ERA of 15).  Throughout this time he was plagued by arm problems and by 1920 seemed destined never to return to the majors.

As the story goes (please refer to Official Policy Of This Blog) during the 1920 season, while in a poker game in New Orleans, Dazzy banged his elbow on the table and felt intense pain.  The doctor he consulted performed some type of surgery on his elbow (Bill James speculates he removed floating bone chips) giving Dazzy immediate relief and his arm never gave him trouble again.

In 1921 Dazzy won 21 games in the minors and the next year his contract was purchased by the Brooklyn team, then known as the Robins after their manager Wilbur Robinson.  He was an immediate sensation and over the next ten years (ages 31 to 40) he was spectacular in an era when slugging had taken over the game and the Robins, or Dodgers as they became known later in the decade, were consistently mediocre.

Over those ten years, Dazzy won 165 games, leading the league in ERA 3 times, in FIP (fielding independent pitching) 7 years and in shutouts on 4 occasions.  He also led the league in strikeouts seven times, in WHIP walks + hits per inning) three times, in Hits/9 innings 4 times, strikeouts per 9 on 8 occasions and strikeout/walk ratio 8 times. 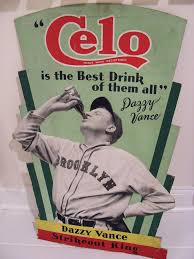 His greatest season was 1924, when his won/loss record was 28-6 with an ERA of 2.16 and striking out 262, impressive anytime but even more so in the context of the times.  His ERA was lower by more than half a run than the next best pitcher and the 262 Ks was a staggering total since the runnerup had only 135 and no one else in the league even reached 100.  All things considered and adjusted for the offensive onslaught it may have been one of the ten best pitching performances in history.

There are two times in my life the hair on my arms has stood up.  The first time I saw the ceiling of the Sistine Chapel and the second time, I saw Sandy Koufax throw a fastball.

Considered a "bonus baby" because he signed for more than $4,000 the Dodgers were required to keep him on their major league roster for two years so Sandy never pitched in the minors.  He spent most of those two years (1955-6) on the bench only pitching sporadically.  When he did he struck out a lot of batters and walked a lot of batters.  Over the next four years he was in and out of the starting rotation, showing flashes of brilliance (striking out 18 in a game in 1959) but often struggling with his control.

It finally came together in 1961 and for the next six years Koufax was phenomenal.  He won 129 games, losing only 47, leading the league in ERA 5 times, FIP every year, shutouts three times and strikeouts on 4 occasions.  He also had the best WHIP in four years, H/9 innings and K/9 innings five times and in strikeout/walk ratio three times.

Koufax was also surrealistically dominant in low-scoring games. Years ago, Bill James researched Sandy's performance in 1963 and 1964 in games where the Dodgers scored 1, 2 or 3 runs.  THC did the same for the 1965 and 1966 seasons (thank you, Baseball-reference.com which is the source for all stats used in this post).  During those four seasons Koufax went 41-17 in those games (.703 winning percentage), an astounding achievement (although the specific averages vary depending upon the era, at all times in baseball history a pitcher getting one, two or three runs in support will lose more than 60% of the time).  In the 17 games he lost Sandy gave up more than three runs on only 6 occasions and only once gave up as many as six. 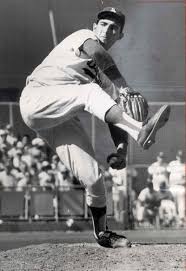 And if Sandy got more than three runs of support?  In 1965 and 1966 when getting more than three runs Koufax won 30 games and lost only one.  Yes, you are reading that correctly.  Yes, it was a hitting poor era but even in that context it is a mind-boggling accomplishment.  Was Sandy helped by having as his home-field pitching friendly Dodger stadium?  Yes, but he also had the lowest-road ERA during that period.

Of course, as an astute THC reader, you are probably asking as you read this; "Yes, that seems to be impressive but how did Sandy's peers Juan Marichal and Bob Gibson perform under those circumstances?"  A very good question, and THC will embark on a further research project and report back on the results.

During those last two seasons Koufax pitched in constant pain.  He began having elbow problems in early 1965 and was told he was risking the use of his left arm if he continued pitching.  He and the team doctor embarked on a treatment program to keep him going as long as possible.

His regimen for those two seasons started by taking Empirin with codeine before the game and after the fifth inning.  He also took butazolidin, a very powerful non steroidal anti-inflammatory drug which was later banned for human use in the U.S. and U.K. because of its dangerous side effects. Sandy would also cover his upper body in capsaicin ointment before pitching.  Capsaicin is the active ingredient that gives chili pepper its potency.  In Jane Leavy's wonderful biography, Sandy Koufax, she tells of a rookie mistakenly putting on one of Koufax's uniform tops before it had been laundered and running into the clubhouse screaming as he began to feel the effects of the capsaicin.  No one could understand how Koufax could stand it - actually it smelled so much no one wanted to stand near him.  At the end of each game Sandy's elbow would turn black swelling up to twice its size and he would soak it in ice.  Finally, near the end of the 1966 season he was told he would permanently lose the use of his arm if he continued leading to his retirement at the end of the season.

Elected to the Hall of Fame in his first year of eligibility, Sandy is currently a Special Advisor to the Los Angeles Dodgers.

Those are career numbers, but this tells you how terrific DK would have been on a year to year basis as he would have led the league in the following categories over the 16 years:

It sure would have been fun to see DK pitch for that long.

THC has been unable to find any video of Dazzy Vance pitching so we'll close with 44 seconds of beautiful  motion by Mr Koufax: