"Doing a film like this is like having a dinosaur as a house pet - you know it's going to be extinct pretty soon, so enjoy it while it's here"
- Sly Stallone in a recent interview


The first new movie I reviewed on this blog was Monsieur Lazhar, a sensitive French Canadian film about a North African immigrant in Montreal and his new job as a teacher at an elementary school where the young children have just gone through a traumatic event.  The next new film reviewed was Bernie, an offbeat indie comedy, featuring Jack Black as an assistant funeral director in East Texas.

So it was natural that my third review would be of The Expendables 2. I'm pretty certain they came up with the plot (something about five tons of buried Soviet-era plutonium in an abandoned Albanian mine) in about ten minutes and wrote the dialogue over the course of an afternoon.  The movie makes absolutely no sense.  I enjoyed it.  These guys know what you are expecting and they deliver. Now let's get on to the important stuff:

Most implausible plot point:  Dozens to pick from but after much deliberation it's a three way tie:
1.  After a huge fire fight in a Nepalese city in the midst of an arid plain, The Expendables escape by a zip line which ends in a jungle.
2.  Stallone crash lands a large cargo plane into the opening of a mine.  There is no explosion and everyone on board is uninjured.
3.  In a wild melee in an airport terminal amidst hundreds of panicked passengers all of the thousands of bullets fired by The Expendables miss the passengers and only hit bad guys (and they are very bad, so they deserved it). Best planner:  Also Terry Crews.  A very good meal planner.  You might want to hire him if you are having a banquet.

Best ability to keep head tilted without ever changing expression even when shooting:  Yu Nan.  She's the girl in the film.  They let one in.

Hardest to guess if there is any difference between the actor on and off screen:  Dolph Lundgren

Most Expendable of The Expendables: Liam Hensworth 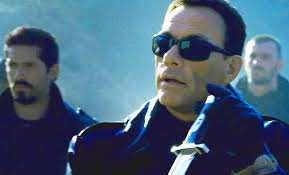 Smallest car with biggest guys:  Willis and Schwarzenegger in a Smart Car touring around the inside of an airport terminal spraying bullets.