The Stuff That Dreams Are Made Of

On December 20, 1522 a treaty of capitulation was signed by Philippe Villiers de L'Isle Adam, the Grand Master of the Knights of The Order of St John (known as The Hospitallers) with the Ottoman Sultan, Suleiman the Magnificent.  Since July a massive Turkish force had laid siege to the Knight's stronghold on the Mediterranean island of Rhodes. 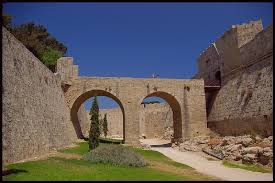 (Fortress of Rhodes)
What were several hundred Christian knights doing in the middle of what had become a Turkish lake by that date?

Since the early 14th century the Ottoman empire had rapidly expanded from its origin as a small state in the western part of Asia Minor.  In the middle of that century the Turks had crossed the Dardanelles and established themselves in Europe bringing much of the Balkans under their control by the end of the century.  At the beginning of the 15th century they turned their attention to dismantling the remnant of the Byzantine Empire, finally capturing Constantinople in 1453 and renaming it Istanbul (which five centuries later inspired Jimmy Kennedy and Nat Simon to write Istanbul (not Constantinople) here performed by They Might Be Giants).   Over the next few decades the Ottomans mopped up isolated fortresses and islands until only Rhodes and Crete (run by Venice) were left in European hands in the eastern Mediterranean. 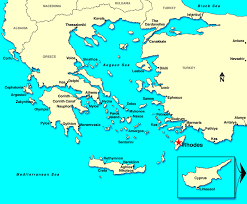 During the decade of the 1510s the Ottomans turned their attention eastward and launched a series of offensives in the Arab world that gained them dominion of the Middle East including the Moslem holy sites in Mecca and Medina and Egypt.  It was the conquest of Egypt that sealed the fate of the Knights of St John (also known by then as the Knights of Rhodes). 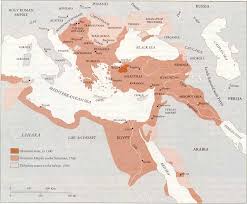 But how did they come to be on Rhodes?  The story starts with Italian merchants from Amalfi and Salerno receiving permission in 1023 from the Caliph of Egypt to rebuild a hospital for Christian pilgrims in Jerusalem.  The hospital was built on the site of the monastery of St John the Baptist.

The formal founding of the Knights Hospitallers came in 1113, after Jerusalem was captured in the First Crusade in 1099, when a papal bull was issued to The Blessed Gerard who ran the hospital.  The original knights were devoted to taking care of the sick and wounded (whence their name).  Very soon however, their duties expanded to providing armed escorts to pilgrims and this wing of the Order quickly developed into a substantial fighting force along with their rival order, the Knights Templar (founded in 1119). 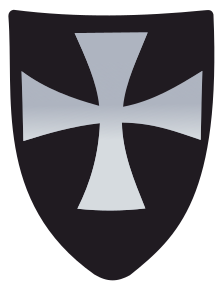 (Shield of the Knights Hospitallers)

The Order was subject only to the authority of the Pope and supported itself by large papal property grants across Western Europe.  They became one of the great military orders of the Latin kingdoms in Middle East, renowned for their expertise in fortification design and construction with the most famous example, Crac des Chevalier, still standing in modern-day Syria. 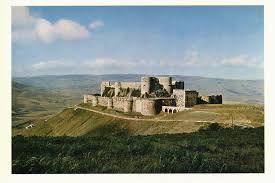 However, in 1187, Saladin began his successful reconquest of the Kingdom of Jerusalem by defeating its army, including a Hospitaller contingent, at the Horns of Hattin and within a few years the Latin strongholds were reduced to the County of Tripoli and the city of Acre, which became the headquarters of the Hospitallers.  In 1291, after a lengthy siege, Acre fell to the Moslems and the surviving knights found refuge on the island of Cyprus.  It eventually became clear that Cyprus was unstable politically and the knights needed to find a new home.  They decided on Rhodes, at that time a possession of the Byzantines, and between 1307 and 1309 they conquered it.

At Rhodes, the Order reorganized itself into langues (or tongues) each commanded by a knight.  In order of precedence the langues were Provence, Auvergne, France, Castille & Leon, Aragon, Italy, France, Germany.


The Knights became even wealthier when in 1312 the Pope dissolved their rivals, the Templars, and transferred much of that order's property to them.  As the world around them changed, the Knights transformed themselves.  As Roger Crowley points out in Empires Of The Sea (2008) they:

". . . reinvented themselves as sea raiders, building and equipping a small squadron of heavily armed galleys, with which they plundered the Ottoman coasts and sea-lanes, taking slaves and booty.  For two hundred years, the Hospitallers maintained an uncompromising piratical presence at the edge of the Moslem world."


They became an increasing annoyance and embarrassment to the Ottomans, particularly after the conquest of Egypt in 1517 since Rhodes was directly astride the sea lanes of communication between Constantinople and the new province.  For the new Sultan (Suleiman ascended the throne in 1521) getting rid of this irritant was an ideal way to start his reign.

Although the Citadel of Rhodes was constructed using state of the art defensive techniques and the knights fought valiantly they also faced a courageous foe that had mastered siege warfare and was unrelenting. 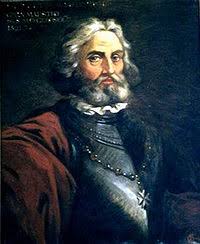 (Villiers) telling him "it was a common thing to lose cities and kingdoms through the instability of human fortune" and then turned to his vizier saying "it saddens me to be compelled to turn this brave old man out of his home".  They were allowed to leave with the documents of their order 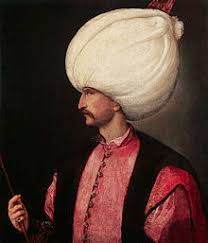 (Suleiman) and their most treasured relics; the right arm of John the Baptist and a venerable icon of the Virgin.

The knights sailed away from their home of two centuries on January 1, 1523 but they were to have one more memorable encounter with the Ottomans.

Suleiman's reign, which lasted until 1566, is the high point of Ottoman history and he is an intriguing man well worth reading about.  His primary focus was expansion in Europe.  In 1526 he shattered the Kingdom of Hungary and for nearly 150 years an Ottoman pasha sat in Budapest.  In 1529 he laid siege to Vienna and nearly captured it, an outcome which would have altered European history.  In the Mediterranean all of the Arab states in North Africa recognized him as Emperor and he had a fleet of galleys that made him master of the sea.  During the 1540s, the Sultan had an informal alliance with France against the Kingdom of Spain and during that time you had the strange circumstances of a Turkish fleet wintering in Toulon in Provence and then in the spring raiding the Italian coast and taking thousands of captives on their way back to Constantinople.

Meanwhile the Hospitallers had found a new home.  In 1530, Charles V of Spain gave them Malta as a perpetual fiefdom in exchange for the annual fee of a Maltese falcon which became the basis for Dashiell Hammett's book and the famous movie, The Maltese Falcon:

Once again, the Knight of St John (now becoming known as the Knights of Malta) began fortifying an island and had a small fleet with which they resumed their pirate ways and harassed the Turks.

Throughout the 1540s, 50s and into the 60s, the naval war between the Ottomans and Spain and its allies intensified.  During the 1550s the Turkish corsair Turgut destroyed the Maltese knight garrisons on the island of Gozo and at Tripoli in modern-day Libya.  In 1560, a Spanish expedition to Tunisia ended in disaster when 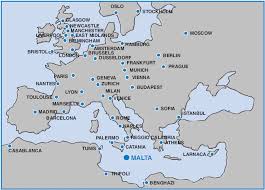 Spain's fleet was destroyed.  In 1565, Suleiman decided it was finally time to take Malta.  If the island could be conquered it would allow the Turkish fleet unfettered access to the Western Mediterranean.

By then the Grand Master of the Hospitallers was Jean Parisot de Valette, who as a 26-year old had fought on Rhodes in 1522 and commanded about 500 knights along with about 5,000 Italian and Spanish soldiers along with Maltese fighters. 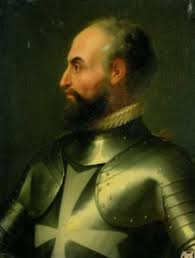 In mid-May about 40,000 Turks landed on the island.  An epic siege, punctuated by ferocious fighting, followed but with a different ending than in 1522.  Although the Turks captured some of the fortifications they suffered terrible losses and finally a Spanish relief force landed on the island and the Ottoman force collapsed with the survivors evacuating Malta on September 11.

The Siege of Malta became a renowned event in European history and was viewed as a turning point in the struggle with the Ottoman Empire.  Nearly two centuries later Voltaire could still write "nothing is better known than the siege of Malta".  Suleiman died the following year and Jean de Vallette passed away in 1568.

The defeat at Malta was the first of two key tuning points for the Ottomans in their battle for naval supremacy.  The second came six years later at the Battle of Lepanto, off the Greek coast, when a combined Spanish, Venetian, Genoan and Hospitallers fleet smashed the Ottoman navy.  On land the Ottomans remained a threat to the other European powers until their defeat at the Second Siege of Vienna in 1683.

The siege was the high point in the history of the Hospitallers.  With the receding of the Ottoman threat their reason for being lost its focus, though the North African corsairs (the Barbary pirates) remained a menace for another two centuries.  With the Protestant Reformation, the Knights lost much of their wealth and were further diminished by the seizure of religious properties after the French revolution.  They continued their raiding and plundering but interest and support from the rest of Europe was shrinking and many of the knights hired themselves out to various European powers.  Finally in 1798, Napoleon seized Malta on his way to Egypt and dispersed the order.

In 1834 the Order, now known as The Sovereign Military and Hospitaller Order of St. John of Jerusalem, called of Rhodes, called of Malta reestablished itself with its headquarters in Rome.  Now popularly known as the Knights of Malta the Order has returned to its original mission of supporting hospital and welfare activities.  They even have their own website! 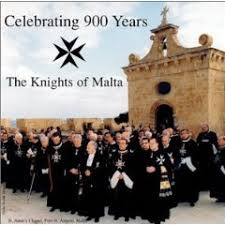 Email ThisBlogThis!Share to TwitterShare to FacebookShare to Pinterest
Labels: 90s Music, History, Movies, Music, Ottomans, They Might Be Giants