It's been frequently noted that despite heated legal disagreements reflected in frequent 5-4 decisions on key issues, there has been an historically unusual degree of collegiality among the justices of the Supreme Court over the past two decades.  This has been attributed to the temperament of the justices as well as the deliberate efforts of the late Chief Justice Rehnquist who sought to cultivate a comfortable atmosphere, including instituting luncheons after the weekly case conferences where it is forbidden to talk business.

A few days ago, Justice Clarence Thomas visited Harvard Law School and was interviewed by Dean Martha Minow and it's now available on YouTube.  The subject of collegiality comes up often and Justice Thomas speaks very affectionately about Justices Ginsburg, Kagan and Breyer specifically.  Breyer and Thomas sit next to each other during oral arguments and, as it turns out, joke with each other (Dean Minow remarks that she has watched them whispering to each other and chuckling).  According to Thomas, Breyer also likes to doodle during the arguments.

Justice Ginsburg is apparently one of the justices everyone else likes.  It's also been widely reported that she and her late husband were particularly close to the Scalias.  Thomas also mentions that one of the other justices (sounds to me like it was probably Scalia) said about Ginsburg that "she makes all of us better judges". 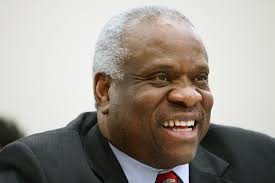 The entire interview is well worth watching (it's 70 minutes long, but if you have less time start at about the 44 minute mark when Dean Minow asks the Justice who are the people he most admires).  Thomas has a compelling personal story and he draws upon it as he gives advice to the students.  I'll highlight some of his remarks below the video.


Thomas talks a lot about the actual mechanics of opinion drafting and it is fascinating.  He mentions that when he came on the Court, Justice Whizzer White told him "you must have a routine" and Thomas certainly does.

He mentions that you "need people who can disagree in a way that moves things forward" when talking about the types of law clerks he hires for each term. 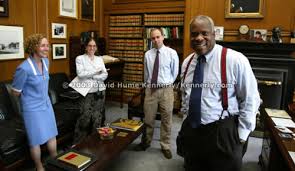 
"The white race deems itself to be the dominant race in this country.  And so it is, in prestige, in achievements, in education, in wealth, and in power.  So, I doubt not, it will continue to be for all time, if it remains true to its great heritage and holds fast to the principles of constitutional liberty.  But in the view of the Constitution, in the eye of the law, there is in this country no superior, dominant, ruling class of citizens.  There is no caste here.  Our Constitution in color-blind and neither knows nor tolerates classes among citizens.  In respect of civil rights, all citizens are equal before the law.   The humblest is the peer of the most powerful.  The law regards man as man and takes no account of his surroundings or of his color when his civil rights as guaranteed by the supreme law of the land are involved...."

He notes that Harlan was the only Southerner on the Court that decided Plessy.

Regarding collegiality, the Justice remarks that despite his stodgy northern New England image, former Justice Souter was an amazingly good storyteller.

He has very pointed views on the need to ask questions in oral argument (as is well known, he almost never asks a question) and on how opinion should be written.  It sounds like on both subjects the Justice who is most his opposite is Scalia although his name never comes up.


He tells the audience that earlier in the day he mentioned to Dean Minow that in his radical phase he demonstrated outside Harvard Law School in 1970.

I don't know whether the students found this encouraging or discouraging but he mentions that he made his final student loan payment during his 3rd term on the Supreme Court!

In response to a question from a student he speaks about how hard it can be sometimes to stick to deciding a case based upon the law and precedent and not on how he personally might resolve it.  He mentions that some of the cases where that had come up "would surprise you" but the only ones he specifically mentions are the Haitian refugee decisions.

Thomas describes himself as "quite introverted" and that the "loss of his anonymity" was the hardest part of the job.

He did not grow up speaking English and it was not until his mid-30s that he felt completely comfortable speaking Standard English.

This last comment goes to Justice Thomas' personal story.  Born in the poor black hamlet of Pinpoint, Georgia which lacked sewerage and paved road in the segregated South of the 1940s, Clarence Thomas grew up speaking Gullah, a mixture

of English and West and Central African dialects and was raised by his grandparents.  He tells the story of his youth and of his later life until his entrance onto the Court in 1991 in his remarkable autobiography, My Grandfather's Son (2007).  It's an candid and sometimes unflinchingly self-critical account which was noted by many reviewers at the time.  The Atlanta Journal-Constitution said it "lays bare the darkest, most painful moments of his life, with candor almost unheard of in public figures" and The Washington Post comments "a fascinating glimpse into a tortured, complex and often perplexing personality".  Thomas writes of his anger and radicalism as a young man, his failed marriage and drinking problems as well as the lessons taught him by his grandfather and in Catholic School that helped him persevere.

If you drew a Venn diagram of people who've read My Grandfather's Son and Dreams From My Father by Barack Obama, I think I'd be one of the few who has read both (I'm convinced based on discussions with many who purchased Dreams From My Father that not many have read it).  I've often thought that you could do a semester college course just discussing the two books, both by young men whose fathers abandoned them, and the issues of race, class, culture and family that they raise.

Early in his career, Justice Thomas took an unfair beating from his opponents over his alleged lack of competence for the job and was commonly viewed as someone who would automatically follow Justice Scalia.  However as Jan Crawford Greenburg revealed in Supreme Conflict (2007) the real story was much different and right after joining the Court, Justice Thomas persuaded Scalia to change his vote in two cases, and today he is considered an intellectual leader on the Court even by those opposed to his views (see, for example, his concurring opinion in McDonald v Chicago (2010), in which he revived the history behind the Privileges and Immunities Clause of the 14th Amendment and laid the legal foundation for a possible future overturning of the Slaughterhouse Cases (1873) which eviscerated the clause leaving it almost meaningless). 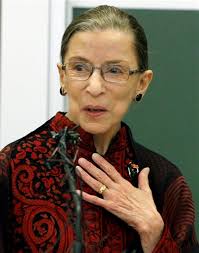 If you'd like to get a better idea why Justice Ginsburg is so liked by her colleagues, Makers.com is featuring a series of short vignettes with her in which she also speaks of the collegiality of the court as well as her career (including the challenges facing a young woman lawyer at a time when professional opportunities were limited) and about her beloved late husband Marty.  You can find them here.
Posted by Mark Stoler at 9:30 AM