End Of The Season

The fourth season of Justified ended last night with the appropriate level of drama and bloodletting and remains my favorite show (though Mrs THC persuaded me to start watching Breaking Bad and I'm now nearing the end of the second season on my Kindle Fire and have to admit it may be as good as Justified).

THC has written about Justified and Elmore Leonard before.  The series has taken Leonard's characters in some different and interesting directions.  As Deputy US Marshal Raylan Givens becomes more laconic and withdrawn and his personal life dissolves 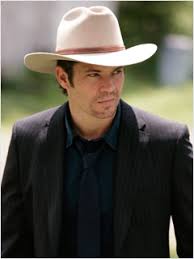 (Raylan) the most interesting character is becoming Boyd Crowder.  Boyd, who worked as a young man with Raylan in the coal mines, started out as a garden variety pathological bad guy but has emerged as a much more complex and, sometimes, oddly sympathetic character, who is faithful to his fiancee Eva ((who shot and killed Boyd's brother, her former husband (he became former when she shot him) (yes, I know, that why this is a sentence that requires parentheticals within parentheticals)) and aspires to a stable 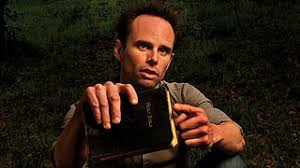 (Boyd) middle-class life, while at the same time running a criminal enterprise.  At times he's less cynical than Raylan, who seems to be devoid of belief in anything other than in his ability to get the bad guys.  Boyd is played by Walton Goggins who manages to carry it off believably.

In other good news, the malevolent Master of the Pithy Observation, Wynn Duffy, last seen fleeing out of the country to avoid the wrath of the Detroit mob is now back

(Duffy)and reunited with Boyd.  Now, if they'd just bring back the incredibly stupid but very entertaining Dewey Crowe, who missed this season, all would be right with the world. 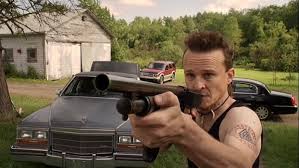 It's time to sit back and wait for the 2014 season.  To close here's a little taste of Boyd Crowder set to music.  Clips are from the first two seasons.