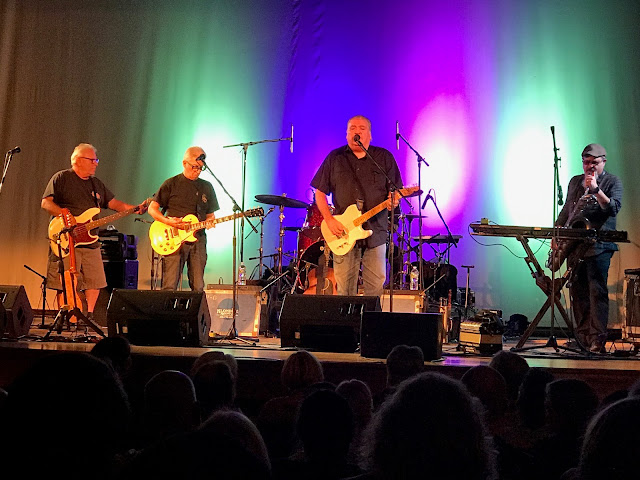 We last saw Los Lobos perform in 1987, headlining a show at Great Woods in Massachusetts at which The Smithereens were the opening act.  We caught up with them again on Friday night at the refurbished Criterion Theatre in Bar Harbor, Maine.

Los Lobos formed in East Los Angeles in the early 1970s when singer/guitarist/composer David Hidalgo met Louie Perez (guitar) in high school.  Soon joined by Cesar Rosas (guitar) and Conrad Lozano (bass), and Steve Berlin (sax and keyboards) in 1984, they toiled away for a decade before beginning to break through with Will The Wolf Survive? in 1984, becoming a huge act with the release of the soundtrack for the film La Bamba, the biopic about Richie Valens, in 1987.

Although La Bamba hit #1, Los Lobos continued to follow its own path, with an eclectic mix of music, refusing to be categorized.  Though never repeating the commercial success of La Bamba, they've continued to make new and good music for the past 30 years.  I've always thought of The Band and Creedence Clearwater Revival as making Americana music.  I put Los Lobos in the same category.  They've taken the elements of The Band and CCR and added some updates reflecting modern America. Listening to their records you hear straight ahead rock n roll, blues, folk, and traditional Mexican, with dashes of zydeco, jazz and country, along with occasional REM style jangling guitars.  They sing about faith and the struggles of people while having fun at the same time.

The lineup we saw on Friday included drummer Enrique "Bugs" Gonzales who joined in 2011 and, though missing the dynamic Cesar Rosas, delivered a fine show.  Hidalgo's tenor voice was as strong as it was decades ago; it's still one of the great instruments in American music, and the band can really rock.  Berlin had some fine sax solos and Hidalgo and Perez traded guitar licks, peaking with searing work on a cover of Neil Young's Cortez The Killer.

We had a wonderful time at the concert; I only wish the set included some of the more offbeat songs and lovely ballads from their repertoire, a couple of examples of which you can listen to below:


And the guys in the band really don't like Paul Simon.  For why read this.
Posted by Mark Stoler at 9:00 AM