(from The Sporting News)

I recently attended a three day meeting sponsored by the Society of American Baseball Research (SABR) in Scottsdale, organized around the Arizona Fall League (AFL) schedule.   Along with attending two AFL games and seeing Max Scherzer inducted into the AFL Hall of Fame we also heard from several speakers, including four former major leaguers, all of whom hated the decision to take Rich Hill out of the second game of the World Series after pitching only four innings:

- Del Unser; 15 years as a major league player, long time Philadelphia Phillies farm director and scout, just retired after 51 years in major league baseball.  Said Micky Lolich was the toughest pitcher he faced.  Del resorted to trying to bunt on him but Lolich knocked him down after every attempt.  He also told some funny stories about being a rookie on the Senators team managed by Ted Williams.

- Ed Lynch; 7 years as major leaguer, and former GM of the Cubs.  Got a law degree after he retired as player.  Told us the Mets could see that Calvin Schiraldi was scared when he came into Game 6 of the 1986 World Series. The man knows his baseball history. 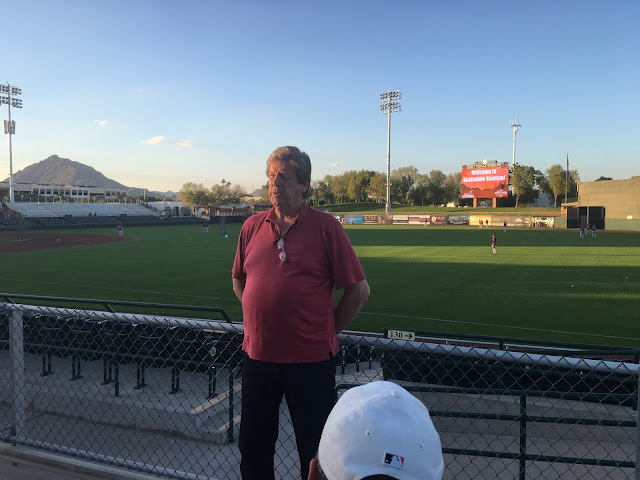 - John D'Acquisto; 10 year veteran, now working for mlb.com.  After retirement got a doctorate in exercise science and physiology and is also a talented artist.  Being an investment adviser did not turn out so well and he served four years in prison for fraud.  His talk was so entertaining I downloaded his well-reviewed book, Fastball John.

And Terry Kennedy.  Terry grew up in baseball.  His father, Bob, played 16 seasons in the majors and then worked for another 36 years as scout, farm director, manager of the Cubs, and as a GM.  He was also Ted Williams' flight instructor during WWII.

Terry played 14 seasons in the majors with his best years in San Diego from 1981 through 1986, including the 1984 NL pennant winners, and was a four-time All Star.  Other than Gary Carter, he caught the most major league games in the 1980s.  He's been a minor league manager for the Cubs and currently serves as an advance scout for the Chicago team.

In his very entertaining talk Terry covered a lot of ground but it was an audience question that inspired me to dig back into the 1984 brawl.

It was August 12, 1984 and the Padres were leading the NL West by eight games.  They were in Atlanta that day and it was typical August weather, hot and humid.  The Sunday afternoon game was delayed by rain and when it finally started the Braves pitcher, Pascual Perez, promptly hit Allan Wiggins, the lead off batter for the Padres.  In the dugout Kennedy, who was catching that day, asked manager Dick Williams if he wanted the Braves lead off hitter, Jerry Royster, plunked in retaliation.  Williams instructed Terry that it was the "****** pitcher" he wanted hit.  That directive led to four bench clearing incidents, three on-field fights, the ejection of 13 players and coaches, the suspension of both managers, and the arrest of five fans.

Perez came to bat in the second but avoided getting hit by pitcher Ed Whitson.  Kennedy remarked that Perez was so skinny and slinky he was hard to nail with a pitch.  The benches cleared but at that point the players just milled around.  In the fourth Whitson threw three pitches at Perez, who dodged each one, leading to the ejection of the pitcher and Williams.  It was here that a unwritten rule of baseball was broken.  If you throw once at a guy and miss him it's over.  But it was never over for Dick Williams - that's just the way he was.

In the sixth, new Padres pitcher Greg Brooker tried and failed in his mission to hit the elusive Braves pitcher, leading to his ejection along with acting Padres manager Ozzie Virgil along with the first on-field fight.

By then the game was teetering on the brink of anarchy and everything finally came apart in the 8th when Craig Lefferts hit Perez on the elbow, earning an immediate ejection.  The ensuing fight led to the ejection of Braves manager Joe Torre and many other players.  Padres player Champ Summers charged the Braves dugout to get at Perez, who had retreated there for protection, only to be restrained by Bob Horner (who was on the DL!).  At that point, a fan dumped beer on Summers and others fans jumped onto the field to enter the brawl.  Order was restored, but only briefly.

In the top of the 9th, Braves reliever Donnie Moore deliberately hit Graig Nettles triggering yet another melee.  The umpires ordered both dugouts cleared of all players who were not in the lineups and the game finally wound to a conclusion with the Braves winning 5-3.

Torre was suspended for three games; Williams for ten, along with a $10,000 fine.  Torre was still enraged after the game, likening Williams' actions to Hitler!  Terry Kennedy still seems embarrassed by the fiasco although he said having Williams suspended for ten games was heaven for the team.  He, along with most of the other Padres, hated their manager, though Terry admitted that after being a manager years later he better understood what Williams was trying to accomplish.

Interviewing Kennedy at the SABR event was our local chapter president, Barry Bloom, a baseball writer since 1980.  Barry currently writes a column for mlb.com, but in 1984 was covering the Padres for a San Diego paper.  After writing that Dick Williams should be suspended for the rest of the season for his role in precipitating the brawl, Williams ejected Bloom from his office and the team voted 24-1 to not allow the writer in the locker room.

Watch some entertaining videos of the 1984 game below.  The player in the dugout without a shirt is Ed Whitson, who'd been ejected earlier.  You can catch a glimpse of a Padres player on the top of their dugout attempting to get at Braves fans - that's Kurt Bevacqua.