This is hard for me as a Red Sox fan, but two of my final three are - yes - New York Yankees.

"Yogi" Berra
We are used to it now after almost 70 years, but how unusual it must have been at the time for Lawrence Peter Berra, growing up in The Hill, an Italian neighborhood in St Louis during the 1930s, to be called Yogi.  He got the name from his childhood friend Bobby Hofman who had seen a movie about an Indian snake charmer and thought his buddy resembled "the yogi". 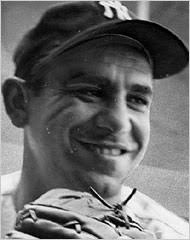 Today, Yogi is 87 and often best remembered for looking rather funny, his Aflac commercials and his various Yogiisms ("it ain't over till it's over", "when you come to a fork in the road, take it" etc), some of which he said and some of which he didn't, including "I really didn't say everything I said" which apparently he did say.  Most of what he did say sounds odd at first but usually makes sense when you think about it.  As Nolan Ryan said "if Yogi had gone to college, they would have made him talk clearer, but not better".

What sometimes gets lost is that Yogi Berra was one of the three best catchers in major league history (I'll leave it to you to argue among yourselves about where within those three he ranks).   Bill James wrote that it was not a coincidence that the Yankees achieved their greatest success, five consecutive world championships, when Yogi was in his prime.

Birdie Tebbetts, then the manager of the Cleveland Indians, told about asking Casey Stengel in the early 1960s (Casey was the Mets' manager by then) about how he achieved his incredible success with the Yankees.  Tebbetts wrote that Casey responded:

I had the privilege of meeting Yogi a couple of years ago and while he's slowed down he is still funny and a class act. 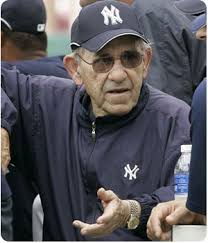 You'll also enjoy visiting the Yogi Berra Museum & Learning Center on the grounds of Montclair State University in New Jersey.  Yogi and his wife, Carmen have lived in the neighborhood since the late 1940s.

And as we found out in 2010, Yogi still insists he tagged Jackie Robinson out at the plate in the 1955 World Series!


Don "Stan The Man Unusual" Stanhouse
I always loved this nickname which was a clever play on Stan "The Man" Musial.  Stanhouse had a ten year career from 1970-80 but got his nickname near its end when he was a star reliever with the Baltimore Orioles (he also had another nickname as you'll see below).  I'll just let Mike Klingaman of The Baltimore Sun tell you about Don in this 2009 article and end with a few pictures capturing his awesomeness.

It has been 30 years since he starred on the mound, a master of comic relief for the Orioles. Was there ever a closer like Don Stanhouse, the big righthander with the Harpo Marx hair, the wacky demeanor and a knack for making every save an adventure?

The stopper for Baltimore’s 1979 American League champions, Stanhouse won 7 of 10 games, saved 21 more and compiled a 2.85 earned run average. But it was the way he pitched – creating a jam, then escaping it – that drove Orioles manager Earl Weaver nuts.

"He (Weaver) would bring me in, then disappear down the tunnel and start chain-smoking his Raleighs," recalled Stanhouse, who was nicknamed "Fullpack" for that reason.

In the AL playoffs, with the Orioles enjoying a 9-4 lead over California, Weaver summoned his frizzy-haired All-Star in the ninth. Stanhouse promptly surrendered four runs before ending the game with the bases full.

Acquired in 1978, Stanhouse perked up the Orioles’ clubhouse with his quirky looks, offbeat antics and a panache right out of Woodstock.

"I’m pretty on the inside," he’d say. "When they took X-rays of my head, they found flowers."

He dressed in black, drove a black Cadillac and furnished his apartment as if the Addams family lived there. He kept a stuffed gorilla atop his locker and a "Happy Feet" welcome mat beneath it. Teammates knew it was game time because Stanhouse uncorked a primal scream after warm-ups." 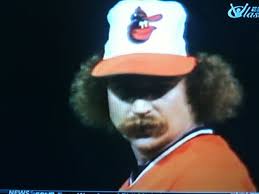 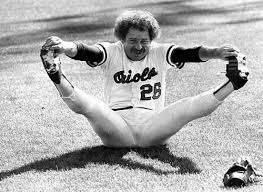 "The Iron Horse" - Lou Gehrig
Has there ever been a more fitting baseball nickname?  Strong, dependable, indestructible.  Pulling the load and never complaining.  For thirteen seasons, from 1926 through 1938, that was Lou Gehrig.  2,130 games in a row, a record considered unbreakable until Cal Ripken came along.  Perhaps the strongest man in baseball at the time. 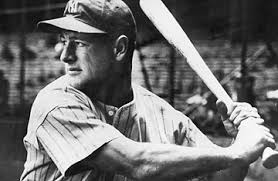 He was so strong that even after his body began to break down with the first onset of ALS (or Lou Gehrig's Disease, the only name we knew it by as kids) in the spring of 1938 he was still able to play a full season of major league baseball that year (see Jonathan Eig's Luckiest Man (2005) for a discussion of when the disease started and its physiological effects) which is astonishing since ALS is a deterioration of the neurological system which in ballplayers has to perform at the highest level.

By the next year, the disease had taken its toll and on May 2, 1939 Lou pulled himself out of the Yankees lineup.  On July 4, 1939, the Yankees held Lou Gehrig Appreciation Day at which he gave his "luckiest man on the face of the earth" speech.  Two years later he was dead at the age of 37.

Watch Lou Gehrig in his prime