Our History And My History

A recent article in the Wall St Journal about the painter Gilbert Stuart  prompted me to think about my attachment to some folks from a couple of centuries ago.  Stuart (1755-1828) painted many of the most prominent Americans from 1785 until his death, including the first six Presidents, and is best known for the unfinished portrait of George Washington used on the dollar bill.

Stuart's portrayals are predominantly of white males from the era of the Founders and early America, a choice not statistically representative of America even then, and certainly not now.  THC's family were Jewish immigrants from Russia who didn't even reach America till the beginning of the 20th century, they certainly didn't look anything like the Founding Fathers, and didn't have much in common with their upbringing.  To prove it, here is one of my maternal great-grandfathers, Max, in a painting done in the 1940s when he was in his eighties. 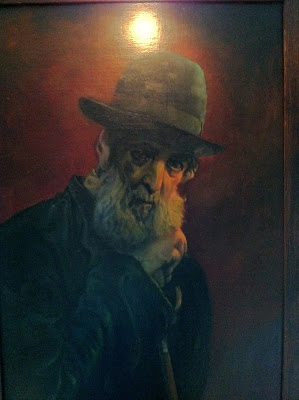 Did the Founders ever anticipate that more than a million of Russian Jews would come flooding into the United States at the turn of the 20th century?  My guess is no, but what makes the American Founders part of my history is what they thought and what they were willing to do, even if they did wear wigs and may not have appreciated my taste in music and movies.  George Washington may not have looked like anyone in my family, but his letter to the congregation of the Jewish synagogue in Newport, Rhode Island defined tolerance in a revolutionary manner, very different from that used in Christian Europe at the time, and still used in the Muslim world.

In the Declaration of Independence they put themselves on the line pledging:


"And for the support of this Declaration, with a firm reliance on the protection of divine Providence, we mutually pledge to each other our Lives, our Fortunes and our sacred Honor."

setting in motion a new world with new ideas, new possibilities and opportunities for millions of people, including my ancestors.

Today we are increasingly fixated on immutable group characteristics such as race, gender and ethnicity as the explanation for, and driver of, behavior, and as a justification for the treatment of people as group members, not individuals.  But it is ideas that are important, regardless of those classifications.

As Calvin Coolidge said on the 150th anniversary of the Declaration:


About the Declaration there is a finality that is exceedingly restful. It is often asserted that the world has made a great deal of progress since 1776, that we have had new thoughts and new experiences which have given us a great advance over the people of that day, and that we may therefore very well discard their conclusions for something more modern. But that reasoning can not be applied to this great charter. If all men are created equal, that is final. If they are endowed with inalienable rights, that is final. If governments derive their just powers from the consent of the governed, that is final. No advance, no progress can be made beyond these propositions. If anyone wishes to deny their truth or their soundness, the only direction in which he can proceed historically is not forward, but backward toward the time when there was no equality, no rights of the individual, no rule of the people. Those who wish to proceed in that direction can not lay claim to progress. They are reactionary. Their ideas are not more modern, but more ancient, than those of the Revolutionary fathers.

In 1926 when Coolidge spoke of those who assert that "we may therefore very well discard their conclusions for something more modern", he was referring to those like Woodrow Wilson, who claimed "If you want to understand the real Declaration, do not repeat the preface" and was openly contemptuous of the Constitution, believing that America needed a new charter empowering an administrative state in order to be able to compete globally with countries like Germany which, in his view, was a model for the reforms we needed.

The timelessness of the Declaration's principles, as expressed in its preamble, is mirrored in the considerations that led to the construction of our form of government in the Constitution, which James Madison referred to as a "sublime commentary on human nature" and, as Madison made clear in the Federalist 51, its features were designed to recognize, accommodate and protect ourselves through devices of the separation of powers, multiple checks on the powers of the three branches, and a government with limited purposes and powers that had been delegated to it by the people who reserved to themselves the remainder of those powers.


Ambition must be made to counteract ambition. The interest of the man must be connected with the constitutional rights of the place. It may be a reflection on human nature, that such devices should be necessary to control the abuses of government. But what is government itself, but the greatest of all reflections on human nature? If men were angels, no government would be necessary. If angels were to govern men, neither external nor internal controls on government would be necessary. In framing a government which is to be administered by men over men, the great difficulty lies in this: you must first enable the government to control the governed; and in the next place oblige it to control itself. A dependence on the people is, no doubt, the primary control on the government; but experience has taught mankind the necessity of auxiliary precautions.

Is there anything in Madison's view of human nature that has an expiration date?  When one looks at the history of governments, whether oligarchies, monarchies, tyrannies, republics or democracies, is he not expressing an eternal truth?  To take such a view does not mean every policy of that time was the right one; as we know, the Constitution required some changes (and the original Constitution itself was a product of political compromise), particularly the 14th Amendment.  But policies and amendments are not the same as the ideas and motivating principles of those dead guys from the 18th century, which should remain our guideposts today.