The September 1780 THC post covered one of the darkest periods of the Revolutionary War for the Americans seeking independence from Britain but which ended on a brighter note:

Yet only a little more than a year later the revolutionaries had triumphed, a reminder of the importance of contingency in history and the limits of predicting final outcomes based upon current trends.


And it helped that Washington was about to make one of his most inspired moves, sending General Nathanael Greene to rebuild an American army in the south and that a bunch of irate Scots-Irish settlers on the western side of the Appalachians were about to come storming across the mountains into the Carolinas; but that's a story for another time.

At the request of avid THC reader RM, we'll tell the story of October 1780 in this post and, while we are at it, talk a bit about Mel Gibson with some interesting links for you to explore.

The Revolutionary War in South Carolina was very violent.  In 1780 and 1781 the state saw more battles and deaths than any of the other former colonies had during the entire war.  The map below shows what happened during just one 6 month period. 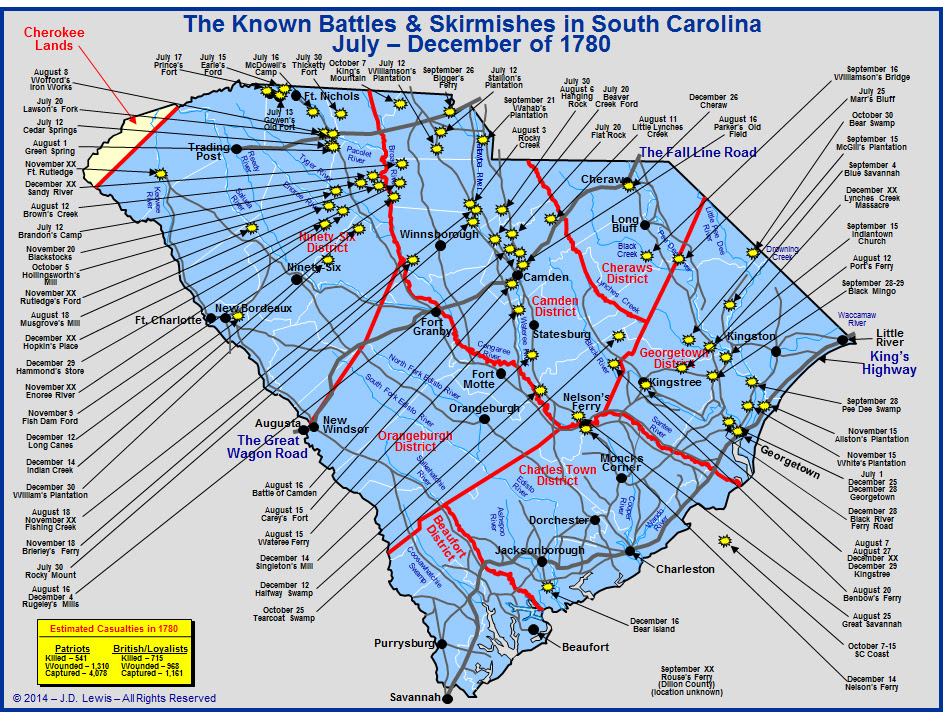 (From Carolana.com)
On one side were the British with strong local Loyalist support.  By August 1780, the British had driven out the regular American forces from the state.  Along with the British line regiments, the English also had a large dragoon cavalry force under Lt Col Banastre Tarleton who quickly became notorious for his brutality as he presided over several massacres.

A large-scale guerrilla war broke out in the state.  The rebels formed several groups of raiders under Thomas Sumter, Andrew Pickens and Francis Marion (known as The Swamp Fox) who attacked small groups of British as well as Loyalists.

Thoroughout this period there were also attacks (which sometimes degenerated into massacres) between local Patriots and Loyalists.  In many cases these were fights to the finish among former neighbors.

The events in South Carolia are portrayed in the final chapter of Mel Gibson's anti-English trilogy, The Patriot (2000), the first two being Gallipoli (1981) and Braveheart (1995), though the finest of the Aussie anti-English films remains Breaker Morant (1980) which is based on the book, Scapegoats of the Empire by George Witton, one of the three soldiers involved in Boer War incident (note: all THC readers are required to see this movie). The Patriot is not particularly (or even remotely) accurate in its details but does capture the extreme violence of this period in South Carolina.  The final battle scene is an alternative universe version of the Battle of Cowpens (January 1781) in which the dastardly Tarleton was soundly defeated. 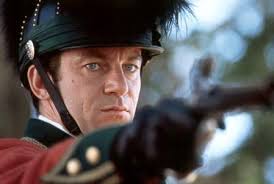 (From The Patriot: the guy who plays role based on Banastre Tarleton)

Among those caught up in the conflict was Andrew Jackson, a 13 year old backcountry boy who, with his family, supported the fight for independence and was present at two of the battles between local militia and the British.  In April 1781 he and his brother were captured and young Andrew was ordered by a British officer to polish his boots, and order he refused to obey and was struck by the officers sword on his hand and face leaving a scar that could still be seen 60 years later in a photograph.  Both boys became sick with smallpox (Currier & Ives print) in captivity and were released only after their mother pleaded for them but Andrew's older brother never recovered and died soon afterwards.   Once Andrew was safe his mother went to Charleston to nurse two nephews who were captive on prison ships but she soon died of a fever.  Andrew Jackson nursed a life long hatred of the British and got his revenge at the Battle of New Orleans in 1815.

In the midst of this turmoil, the first change in fortune for the Patriots took place on October 7, 1780.
After the battle of Camden in August, Lord Cornwallis advanced to the area around Charlotte, North Carolina.  To secure his left flank he ordered Major Patrick Ferguson to take a large force of Loyalist militia and advance towards the Appalachians to subdue the rebel militias.  He advanced towards the North Carolina/Tennessee border and on September 10 ordered the local militias to lay down their arms or he would "lay waste to their country with fire and sword" - a fatal misunderestimation of his opponents.

The people to whom he issued this order were hardy Scots-Irish settlers who had left the upcountry areas of the Carolinas to move over the mountains (they were known as the "Overmountain Men") and wanted to be left alone.  They did not want to be subject to the British or anyone else but most of them had relatives that had stayed behind, many of whom had been killed or ruined by the British and their Loyalist supporters.

Overmountain militia leaders Isaac Shelby and John Sevier met and agreed to join forces and move against Ferguson.  On September 25, their men along with some Virginia and North Carolina militia met near Elizabethton, Tennessee and began to move across the mountains.  Alarmed, Ferguson and the Loyalists began to retreat in an attempt to rejoin Cornwallis.

(Route of the Overmountain Men from www.learnnc.org)

On October 7, the Patriot militia surprised Ferguson at King's Mountain on the South Carolina/North Carolina border and only a day's march from Cornwallis.  Though Ferguson and his Loyalists occupied the high ground, the Overmountain Men made short work of his command.  Within an hour Ferguson was dead and his entire command, 1100 Loyalists, was dead, wounded or captured with fewer than 100 Patriots killed or wounded.  Having won their victory the Overmountain Men turned around to go home but, emblematic of the bitter feelings engendered on both sides, as they moved west they held drumhead court martials of local Loyalists, hanging nine of them.  It was the end of any organized Loyalist offensive presence in the backcountry of the Carolinas. 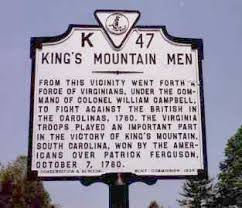 The other major event of that month took place on October 22 when George Washington appointed Nathanael Greene to command the Southern Continental Army.  His letter of instructions (drafted by Lt Alexander Hamilton) made it clear that Greene had discretion to act as he judged best:

Uninformed as I am of the enemy's force in that quarter, of our own, or of the resources which it will be in our power to command for carrying on the war, I can give you no particular instructions but must leave you to govern yourself intirely, according to your own prudence and judgment and the circumstances in which you find yourself.

. . . My warmest wishes for your success, reputation, health and happiness accompany you

At the start of the Revolution in 1775, Nathanael Greene was a 32-year old Rhode Islander and a self-educated Quaker.  When he began to organize a local militia he was expelled from the Quakers.  He had no military background and all he knew was from reading military treatises but he rose quickly in the army and gained Washington's confidence, leading troops at the Battles of Brandywine and Monmouth and serving as Quartermaster General at Valley Forge where he is credited with helping the army to survive.   Washington had no question that Greene was the man to send south to try to salvage something from the shambles that Horatio Gates had left behind.  Accompanying Greene were several hundred of the best soldiers from the Continental Army, the line regiments from Delaware and Maryland.

Green took command of his army on December 2, 1780 at Charlotte, North Carolina and over the next ten months led a remarkable campaign, first enticing Cornwallis into a fruitless chase of his force into Virginia (the "race to the Dan" River) and then when the British fell back, reentering North Carolina and engaging Cornwallis at Guilford Court House (March 15, 1781), a tactical defeat but strategic victory for the Americans [Note:  At the end of the battle the British remained in possession of the battlefield (tactical victory) but were forced to retreat afterwards because of heavy casualties and supply shortages (strategic defeat)] after which an exhausted British force fell back to Wilmington, North Carolina on the coast from where Cornwallis turned his attention northward and embarked on the invasion of Virginia that ended with his surrender at Yorktown in October. 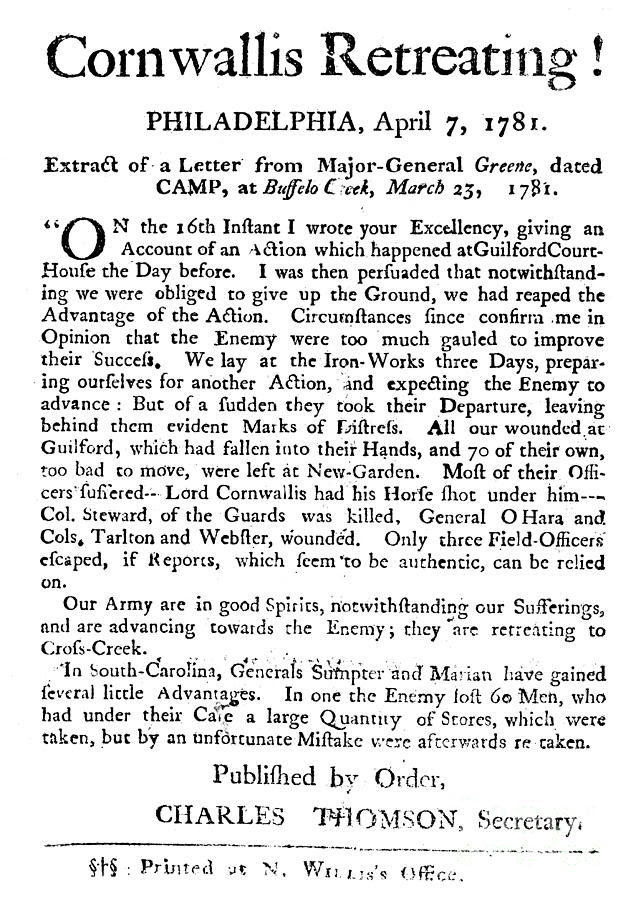 As Cornwallis moved north, Greene moved south into South Carolina.  The Battle of Hobkirk's Hill (April 25) was another tactical defeat but strategic victory and Greene began rolling up the British outposts in the countryside culminating in the successful siege of Ninety-Six in May and June.  Finally, at the Battle of Eutaw Springs (September 8), Greene had yet another tactical defeat but strategic victory resulting in the British evacuation of all of the state except for Charleston.
(General Greene)
With the possible exceptions of Benedict Arnold (before he turned traitor) and Daniel Morgan, Greene was the best battlefield commander and strategist on the Patriot side during the war but is little known today though he was renowned at the time and the city of Greenville, South Carolina is named after him.  After the war he refused the post of Secretary of War under the Continental Congress and moved to a farm in Georgia where he died of sunstroke in 1786 at the age of 43.
Posted by Mark Stoler at 8:00 AM