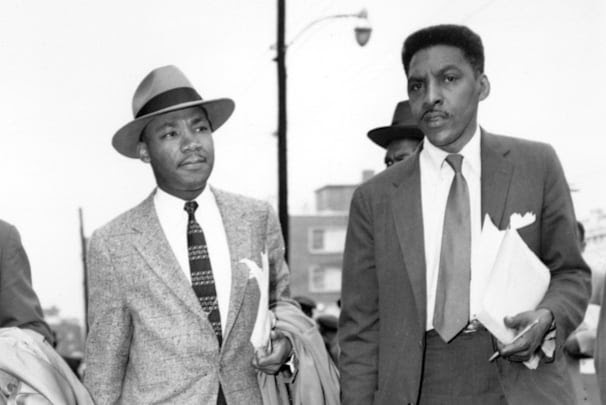 
Bayard Rustin was born on March 17, 1912 in West Chester, Pennsylvania and raised as a Quaker and pacifist.  He died in 1987 while on a humanitarian mission in Haiti.

As a young man in the 1930s he became involved in the emerging civil rights movement and also a member of the Young Communist League in 1936.  The League, under the direction of the Communist Party USA (CPUSA), which, in turn, was under the direction of Joseph Stalin, supported civil rights for African-Americans.  After the signing of the Nazi-Soviet Non-Aggression Pact in  August 1939, the CPUSA agitated to keep the US out of WWII. However, in June 1941, after the Nazi invasion of the Soviet Union, the CPUSA was directed by Stalin to do everything possible to get the US to enter WWII and to cease its civil rights advocacy.

This change prompted Bayard Rustin to resign from the CPUSA and join the Socialist Party, led by Norman Thomas.  Over time Rustin was to develop into a firm anti-Communist like many others who fled the Party.  It is often forgotten that there was a strong anti-communist left during the 1930s and 1940s and one of the most prominent anti-communists was Norman Thomas who considered himself a democratic socialist and was repulsed by the dictatorial and secretive practices of the communists.

During WWII, Rustin was part of a group planning a March on Washington in support of civil rights for African Americans.  President Roosevelt, desperate to avoid anything that would detract from the war effort held a White House meeting with Rustin and the other leaders at which they agreed to suspend their plans in return for which FDR issued an Executive Order banning discrimination in the defense industry and federal agencies.

As a pacifist, Rustin resisted induction during WWII and was jailed from 1944 to 1946.  After his release he organized the first Freedom Rides to test the desegregation of interstate transport, an effort that resulted in him spending 22 days on a North Carolina chain gang during 1947 (a few years earlier he had tried to board a bus from Louisville to Nashville and been badly beaten).  The following year he journeyed to India to learn about non-violent protest tactics from disciples of Mahatma Gandhi.

His association with Martin Luther King began in 1956 during the Montgomery Bus Boycott and he worked closely with Rev King over the next few years helping organize the Southern Christian Leadership Conference (SCLC) which became King's primary vehicle for the civil rights struggle.  Rustin's talents for organization were recognized and he ended up pulling together the famous 1963 event in Washington DC.  Through these years he was often kept in the background by other civil rights leaders.  The reason was not so much his communist background as his homosexuality, a fact he did not hide (though the combination led to a massive FBI file).  This was at a time when homosexual practices were subject to prosecution in every American state and Rustin himself had been arrested in Pasadena, California in 1953.  The uneasiness this engendered could be seen when Rustin was forced off the SCLC Board by a fellow Board member, US Rep Adam Clayton Powell (D-NY), who threatened to go public about Rustin's sexual orientation.

Several weeks before the March an incident occurred which changed some attitudes within the movement.  Senator Strom Thurmond (D-SC) took to the floor of the Senate to denounce Bayard Rustin and placed the entire file of his Pasadena arrest into the Congressional Record.  This caused many Rustin's fellow Civil Rights leaders to rally around him and he was given his due as the organizer of the March as can be seen by the cover of the September 6, 1963 issue of Life Magazine where he is pictured along with A Philip Randolph with a heading noting that they were "The Leaders" of the March. 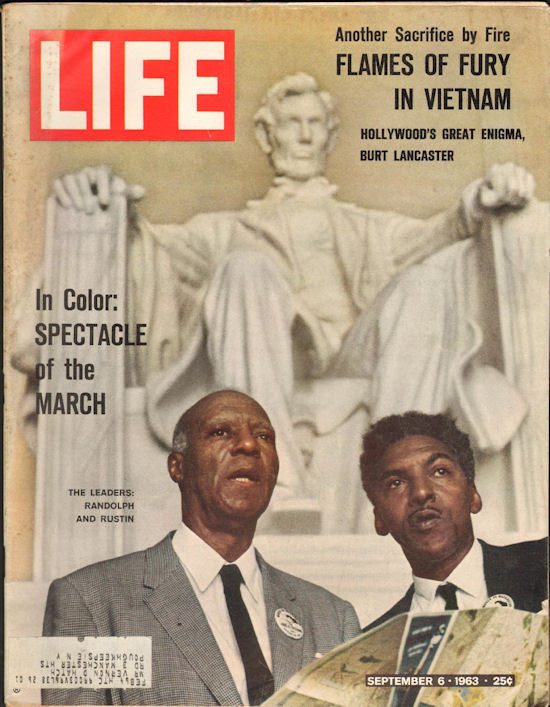 After the passage of the 1964 Civil Rights Act and 1965 Voting Rights Act splits began to emerge within the civil rights movement and Rustin increasing found himself out of sync with some of the new trends.  He rejected identity politics, believing that alliances with labor and across racial lines were what was needed to achieve full equality and economic prosperity for African-Americans.  Here is an excerpt from his 1962 debate with Malcolm X about this very topic.  The debate was at a time when Malcolm was still associated with the Nation of Islam from whom he later split, a defection that led to his murder in 1965.

He later went on to a senior role with the AFL-CIO in an attempt to further cooperation between African Americans and labor.

Named Honorary Chairperson of the Socialist Party of America in 1972, he also found himself, on foreign policy issues, increasingly at odds with the New Left and the Democratic Party of the 1970s and 80s.  Rustin's anti-communism was considered outmoded by these groups who prided themselves on being anti-anti communists.  It had started in the 1960s when Rustin opposed American withdrawal from Vietnam without a negotiated settlement, though he was also harshly critical of the tactics employed by the Johnson Administration.  It continued in the 1970s when Rustin denounced the active policy of intervention by the Soviet Union and Cuba in sub-Saharan Africa as well as opposing the Soviets' expansionist foreign policy.  He also worked with Senator  Henry "Scoop" Jackson (D-WA) on legislation to link US-Soviet trade relations to the plight of Soviet Jews and he organized a black group in support of Israel at a time when both leftists and black leaders were becoming less sympathetic to Israel.

How Rustin is remembered today tells us less about the man and more about current trends in our society.   As Cathy Young noted in her 2013 piece in Real Clear Politics, when Rustin died in 1987 any mention of his homosexuality was avoided by the NY Times in his obituary.  Today, it is the lead in any piece on him.  At the same time his anti-communism and neocon views on foreign policy (Rustin became a frequent contributor to Commentary, the birthplace of neoconservatism) have been pretty much written out of the record.  Young writes of his views on pacifism later in life:

Rustin bluntly stated, “Whereas I used to believe that pacifism had a political value, I no longer believe that.” He still considered himself a pacifist insofar as he had a strong interest in non-military means to defend freedom, which he now regarded as the most important value; without such feasible alternatives, he argued, it was “ridiculous…to talk only about peace.”


In contrast, most of the articles THC looked at in researching this post contained NO mention of this aspect of his political life, including the bio released by the White House when he received the Presidential Medal of Freedom in 2013.  Here's a typical example.  One can hope that the day will come when we can discuss all the aspects of this compelling figure.  Cathy Young best captures Rustin, and his lessons for us:

Labels aside, Bayard Rustin was a great American and a true hero. He had firsthand experience of oppression and prejudice; yet for him, human rights activism was never about solidarity with his own group but about freedom, justice and dignity for all. He had firsthand experience of the shortcomings of Western democracy—yet he understood that it was the bulwark of the values he believed in, and that it’s worth fighting for. His legacy presents a challenge to both left and right: to the right, a warning against demonizing social democratic politics and gay advocacy (which Rustin embraced late in life, less as a personal cause than as an integral part of the human rights struggle); to the left, a warning against treating the West and its allies as the cause of all ills.