The Dream Of Scipio 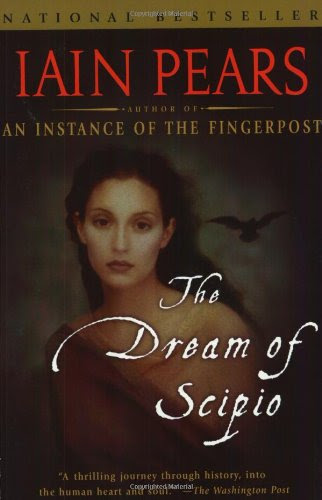 Unsettling was the word his friend used to describe the book.  THC agreed that unsettling was a good word. The Dream of Scipio (2002) is unsettling from its opening sentences, "Julien Barneuve died at 3:28 on the afternoon of August 18, 1943.  It had taken him twenty-three minutes exactly to die, the time between the fire starting and his last breath being sucked into his scorched lungs.  He had not known his life was going to end that day, although he suspected it might happen", until its terse and chilling closing paragraph.

Scipio is an inverted version of author Iain Pears best selling novel, An Instance Of The Fingerpost (1997), concerning a curious series of events taking place in and around Oxford in mid-17th century England, as told in parallel narratives by four participants.  Like Fingerpost, Scipio is set in and around a specific geography, in this case the Avignon region of southern France, but unlike the earlier story it is set in three different time periods over a 1500 year period.  While Fingerpost is about the same events seen from multiple perspectives, Scipio tells of different events that all raise the same questions about how one should act and make choices in life.  The narrative in Fingerpost is more straightforward, even with the variations in the tale, but is more oblique in its approach to the larger questions it raises, questions that are front and center throughout Scipio, which employs an intertwined narrative moving back and forth across its three time periods.

The earliest historical setting of Scipio is the crumbling Roman province of southern Gaul around 475 AD.  Manlius Hippomanes is a member of the dwindling elite of wealthy Romano-Gallic aristocrats, educated in classical philosophy and literature in a world that no longer has use for either, and from which the last of the Roman Legions who protected them disappeared a decade before.  While the Goths approach from the west and the Burgundians hover threateningly to the north some of his compatriots dream of being rescued by a renewed Roman Empire and others, like the real-life Sidonius Apollinaris, actively resist, Manlius believes himself more practical minded and steers a course designed to save what he believes can be saved and to do whatever must be done to achieve that goal. (Roman acqueduct near Avignon)
The middle section tells the tale of Olivier de Noyen, an aspiring poet and courtier of Cardinal Ceccani in the Papal Court at Avignon as the Black Death approaches and then engulfs the city during the middle of the 14th century.  His role as courtier to Cardinal involves him directly in the complicated plotting over whether the Papacy should stay in Avignon or return to Rome and entangles him with an actual historical figure, the Jewish rabbi Gersonides, eventually forcing him into choosing what, and whom, to save and to betray.  De Noyen is also a collector of ancient manuscripts and discovers a copy of The Dream Of Scipio, a puzzling tract written by Manlius who by this time is considered a saint in the Catholic Church.

(The Papal Palace in Avignon)

The final setting is Vichy France during WWII, and centers on Julien Barneuve, a scholar and intellectual, emotionally numbed by his experience in the trenches during the prior war.  When questioned about his isolation by someone who observes that he is sitting in a library while the world burns he replies:


The world did burn.  I was at the cremation.  And it would have been better if I had stayed in a library.  One person, at least, would be alive now who is dead, because I wouldn't have been there to bayonet him.

With the defeat of France in 1940, Julien accepts an appointment from a friend as a minor functionary in the Vichy regime, a position from which he believes he may be able to save as much as possible from the barbarian Nazis.  At the same time he is studying de Noyen's poetry and through him Manlius' Dream.  Eventually Julien must make choices between Vichy, the Resistance, and his recently found long elusive love, while it dawns on him that he has fatally misread both de Noyen and Manlius. 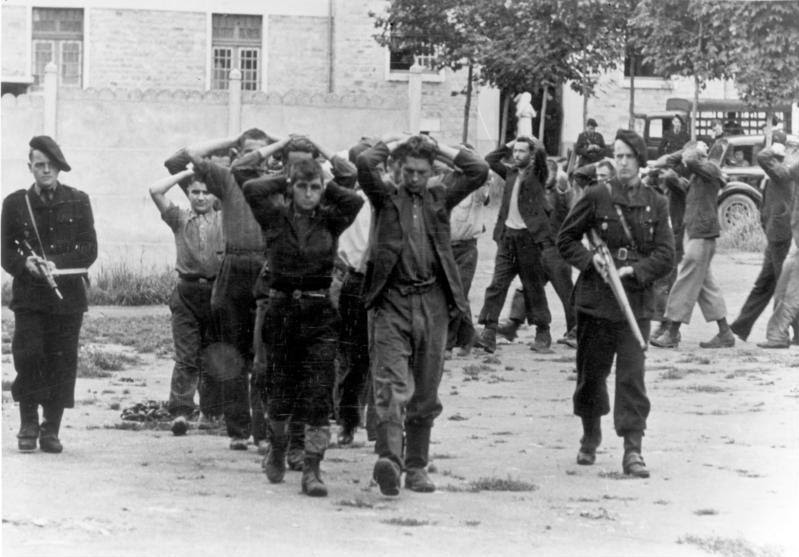 All three protagonists live in dark times of civilizational crisis; the end of the classical era amidst rampaging barbarians; the advent of the Black Death which may kill all; and the seeming triumph of the Nazis.  All are confronted with decisions about what is worth saving and face conflicts between friendship and loyalty.  Each makes compromises to try to preserve something they believe is of even more value.  Terrible consequences follow each decision even though the reader may conclude some choices were better than others.  The Dream of Scipio asks us, should we decide how to make a decision based upon its perceived consequences or are there values more important regardless of consequences since we cannot know in advance what those consequences may really be.  It asks, what is civilization?  How do we preserve it?  And, what if we are mistaken about what civilization consists of?  What if in saving civilization from barbarians we become barbarians ourselves? It asks, but does not answer. Or does it?  As Pears writes elsewhere:

In trying to answer these questions some of the characters commit what they know to be terrible acts in order to preserve what they believe is best in the world, while others commit acts that have horrible consequences they did not intend.

Pears does not easily betray to the reader his own views nor do his characters always act in ways that fits expectation.  Julien's closest friends are Bernard, a skeptic, atheist, and man of the left who ends up with the Resistance, and Marcel, religious, and a man of the right who offers his friend a job with Vichy.  Pears deliberately makes it difficult for us to clearly sympathize with either and disrupts any preconceived notions we may have.  Julien recalls an incident when, as children, Marcel threw a stone, breaking a church window, a deed for which Bernard takes the blame:


This was the event Bernard had referred to, one of those moments of childhood from which the whole of adult life can be projected.  Julien, nervous, innocent, but standing fast.  The insouciant Bernard, making the grand gesture in the name both of friendship and of self-aggrandizement, his actions extravagant but generous.  And Marcel, a little cowardly and frightened, afraid of authority, not wishing to take on the ownership of his deeds, content for others to be punished instead of him.  The resister, the collaborator, and the vacillating intellectual . . .

Except that Julien remembered it like that only because Bernard retold the story many years later and brought it back to his mind.  Imposed his narrative on what had become the faintest of recollections; created memories by his skill as a raconteur  . . .

But, on a few occasions, he was almost certain he remembered that it was Bernard who had thrown the stone and run away, and Marcel who had been beaten.

There is a final layer to the novel for the reader to interpret. While there is no book by the fictional Manlius titled The Dream of Scipio, Somnium Scipionis (Dream of Scipio) is a famous piece by the 1st century BC Roman writer and politician, Cicero, which tells of the dream of Scipio Aemilianus (the destroyer of Carthage in 146 BC), in which his grandfather Scipio Africanus (who defeated Carthage to end the Second Punic War in 201 BC) appears and instructs his grandson on what makes a good Roman citizen while at the same time pointing out the relative insignificance of Rome in the scheme of the cosmos and discussing virtue from a Stoic perspective. In the novel, Olivier de Noyen initially thinks that what he has found is just another copy of this work before he realizes it is composed by Manlius.  In turn Cicero's work was the subject of a 5th century AD commentary by a Roman aristocrat, Macrobius Ambrosius Theodosius, and both works have prompted philosophical analysis over the centuries.

Cicero himself was caught in the same dilemma presented in the novel.  Born in 106 BC, Cicero was one of the "new men" who rose to prominence in the last years of the Roman Republic.  Devoted to the preservation of the Republic, he opposed the ambitions of Julius Caesar, after earlier supporting him, and approved, after the fact, of his assassination, an act which in retrospect doomed the Republic.  When Octavian, Caesar's 19-year old nephew, and adopted heir, showed up in Rome amid the turmoil triggered by Caesar's death, Cicero felt confident he could manipulate the young man and  use him as a tool to restore the Republic but the calculating Octavian ultimately allies himself with Marc Anthony, an enemy of Cicero, in ending the Republic.  As a price for their alliance, Octavian agreed to Anthony's demand that Cicero die.  Eighteen months after Caesar's death, Cicero's hands and head were nailed to the Rostrum in the Roman Forum.

There is much more to this novel than can, or should, be included in a brief review, such as the three women characters, respectively a pagan, a young woman housekeeper for a rabbi, and a secular Jewish woman, who force Manlius, Olivier and Julien to confront the conflicts at the heart of the book.  THC has reread many books over the years but The Dream Of Scipio is the only one he can remember rereading within the same year and he will return to it again.