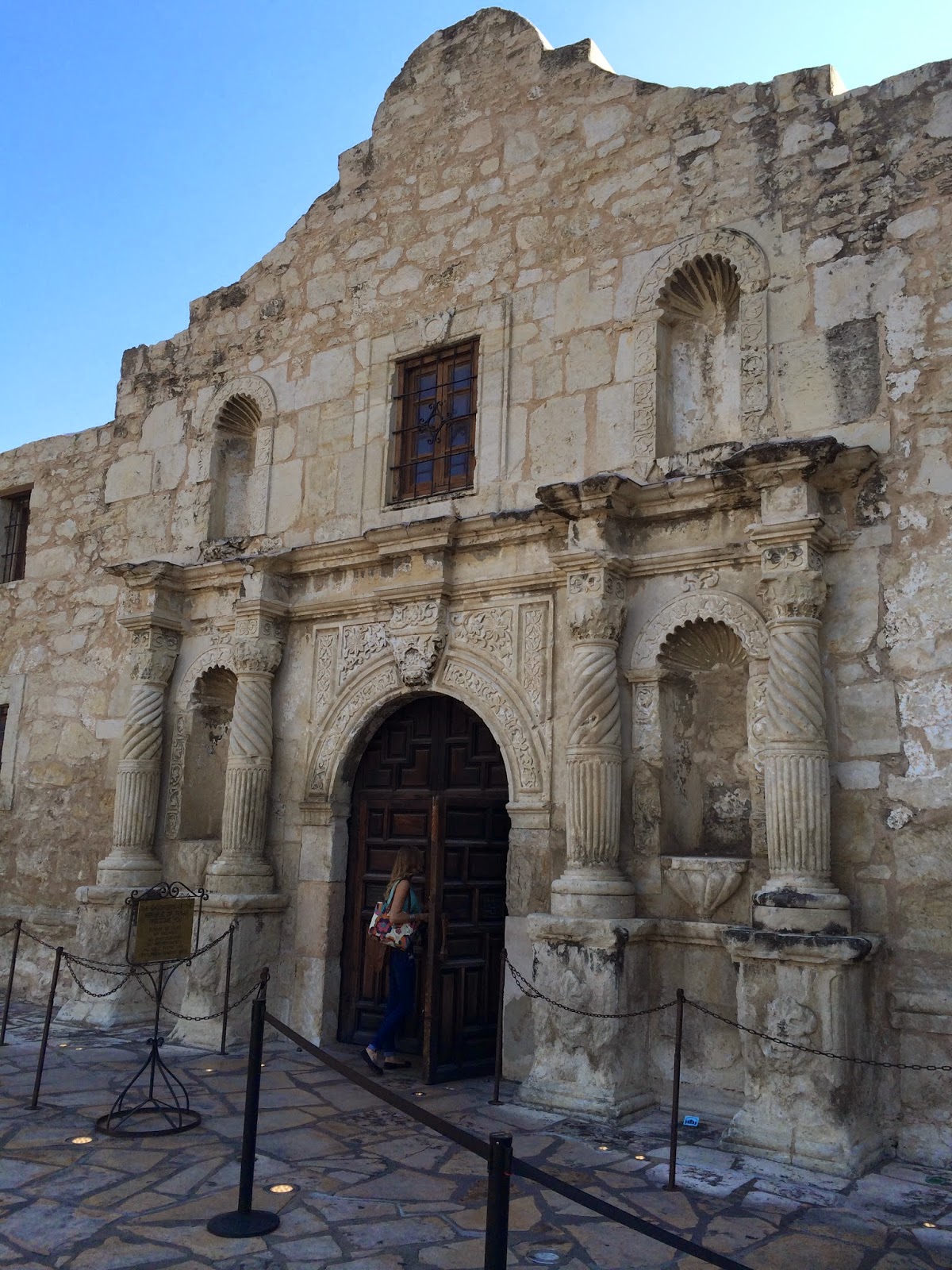 In late October, THC visited the Alamo in San Antonio, where in the early morning hours of March 6, 1836, between 182 and 253 Texians and American volunteers (the most prominent being David Crockett of Tennessee), under the command of William Travis and David Bowie, died in an assault by about 1,600 Mexican soldiers (of whom about 400 were killed or wounded) under the command of General Antonio Lopez de Santa Anna, who had laid siege to the Alamo for 13 days.  This was not the first time the Alamo had been captured in the fight for Texas independence which began on October 2, 1835.  The first time was on December 10, 1835 and it was a Mexican army unit which surrendered the Alamo!

The origins of the Texas revolution are still hotly debated, and the controversies deserve a post of their own, so for now THC will stick with a brief and very simplified summary.  Mexicans fought their own long war for independence from Spain from 1810 to 1821.  In 1824, a new Mexican Republic established a federal system in which the individual states had considerable autonomy.  That same year saw Mexico grant rights to Stephen Austin to establish a colony of American settlers in the Tejas section of the state of Coahuila y Tejas which included modern day Texas, as well as the Monclova and Saltillo regions of northern Mexico.  The new settlers had to pledge allegiance to Mexico and declare themselves to be Catholics.  Over the next decade thousands of settlers poured into the sparsely populated Tejas while Mexico underwent governmental turmoil and frequent changes in administration, all centered around disputes between factions supporting a federal republic and advocates of a centralized state, while at the same time the governments in Mexico City became more leery of the influx of Americans banning further immigration into Tejas in 1830, a ban that was mostly ignored.

In 1834, federalists supported by General Santa Anna came into power but he reneged on his promises and the following year abolished the 1824 Constitution, imposing a centralized regime in its place.  In response, several Mexican states rebelled, including Coahuila y Tejas and indeed over the next several years three attempts were made to set up new independent republics, two of which failed (Republic of the Rio Grande and Republic of Yucatan) and one succeeded, the Republic of Texas.  All of this occurred as many of the Texas settlers were agitating to join the United States whose president, Andrew Jackson, had already tried unsuccessfully to purchase it from Mexico (for more see Sam Houston: The Raven). 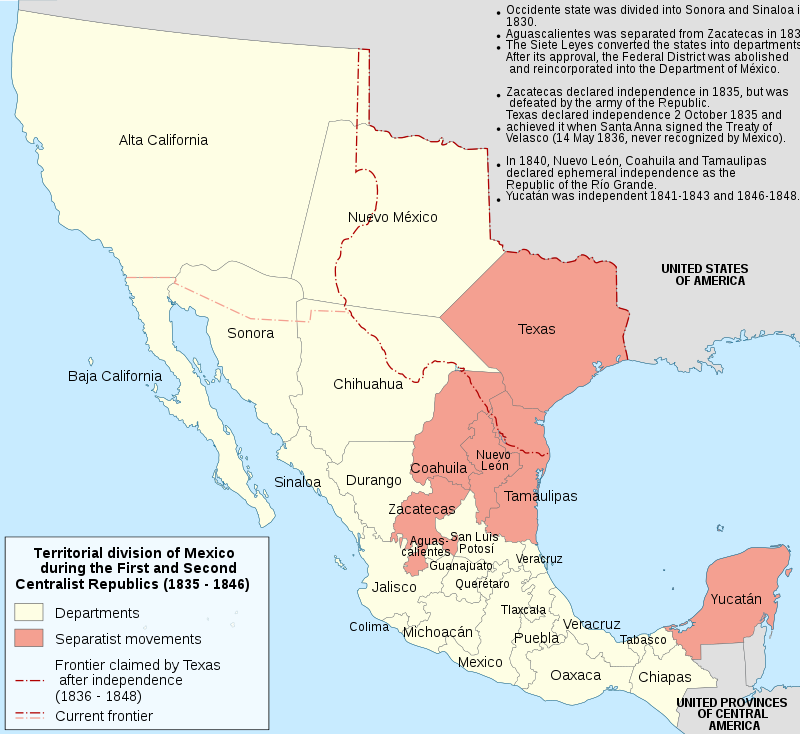 By 1835 Texas may have contained 30-40,000 "Anglo" settlers, 7,000 Tejanos (of Mexican/Spanish origin) with the largest concentration in San Antonio de Bexar, and 5,000 slaves.  While the rebels were predominantly Anglo, they were joined by many Tejanos who objected to Santa Anna's dictatorship.

When war broke out in October 1835, a Texian militia force was raised and moved on San Antonio de Bexar, which housed a substantial Mexican army garrison.  After a prolonged siege of the town and then several days of house to house fighting beginning on December 5, the Mexican commander, General Cos and his 400 men took refuge in the Alamo.  Realizing it was indefensible Cos surrendered on December 10 and he and his men were allowed to leave upon pledging they would not fight again against the Texians.  They left behind 15 cannon.

With the Mexican army gone from Texas, the rebels set about trying to establish a regular army to resist the expected attempt by Santa Anna to reconquer the state the following spring, but Santa Anna moved quicker than expected, assembling an army (including Cos and his troops) and advancing in mid-winter.  His troops were poorly prepared for the harsh weather, and it is a tribute to their hardiness and determination that they were able to continue their march through a heavy snow storm and record cold, with many dying in the terrible conditions.  An advance guard marched into San Antonio on February 23, surprising the rebels and forcing them to quickly abandon the town and move into the Alamo without having made adequate provision for a siege.

The Alamo was originally built in 1717 as a Catholic mission to encourage the conversion of the Indians.  By 1800 it had been abandoned and after that was periodically occupied by soldiers during the Mexican War of Independence and thereafter.  Though walled, it was not built for defence against trained military forces and artillery, and much of it had crumbled into disrepair by 1835.

Visiting the Alamo today can be deceptive for the casual visitor.  All that remains of the mission is the church itself and part of what is known as the Long Barracks.  The walls that enclosed the open plaza in front of the church are gone, as well as all of the other structures along and within the walls ,making it difficult to visualize what it looked like in the 1830s.  And even what we see of the church is misleading.  At the time of the battle the church was a wreck without a roof and the distinctive "hump" in the middle of the roof front that most of us still instinctively associated with the battle.

Many visitors see the wall around and behind the current church and assume that it was the wall of the Alamo in 1835-6, but that wall did not exist at the time.  Below are three renderings of the Alamo as it existed back then, superimposed on the San Antonio of today, which give a good idea of the extent of the open plaza inside its walls.  The west wall of the Alamo lies in part under the Ripley's Believe It or Not, much of the north wall beneath a courthouse and post office, while the south wall is under the open plaza.  The extent of the walls and the plaza made defense with a mere 200 men impossible; at least double that number would have been required to successfully hold the Alamo against the well-trained Mexican army. 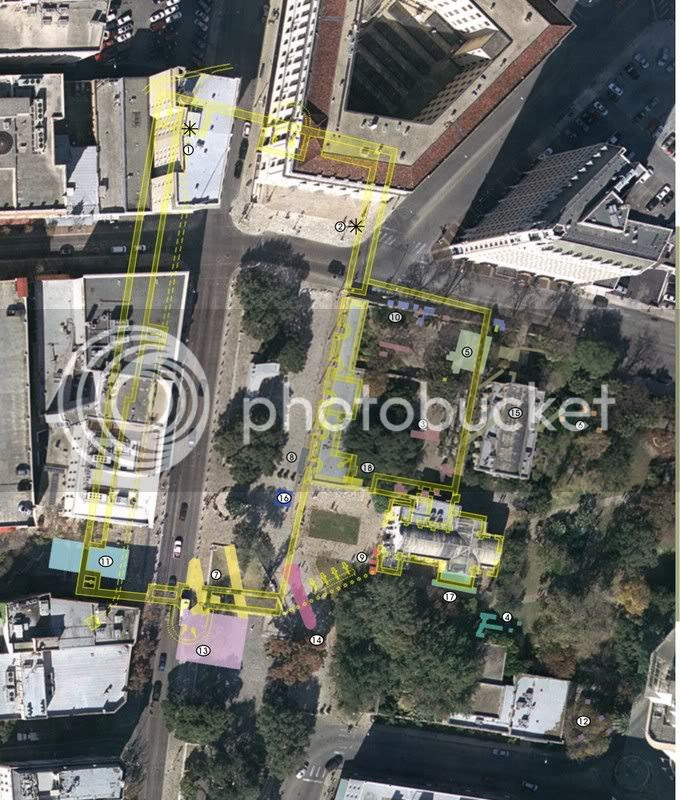 Taken from position of the South Wall. 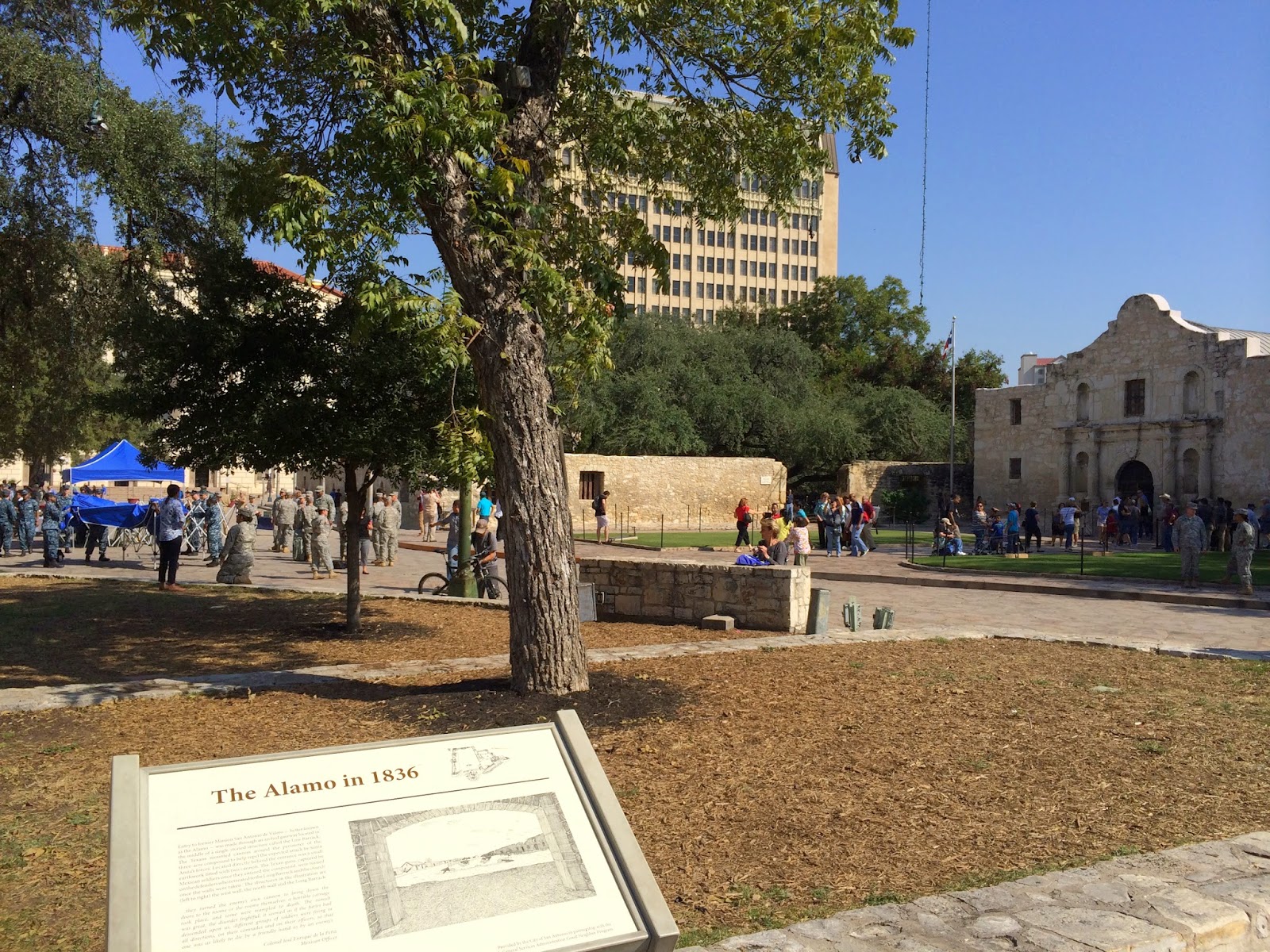 From the West Wall.  Gives a sense of the scale of the open plaza between the walls and the Mission Church. 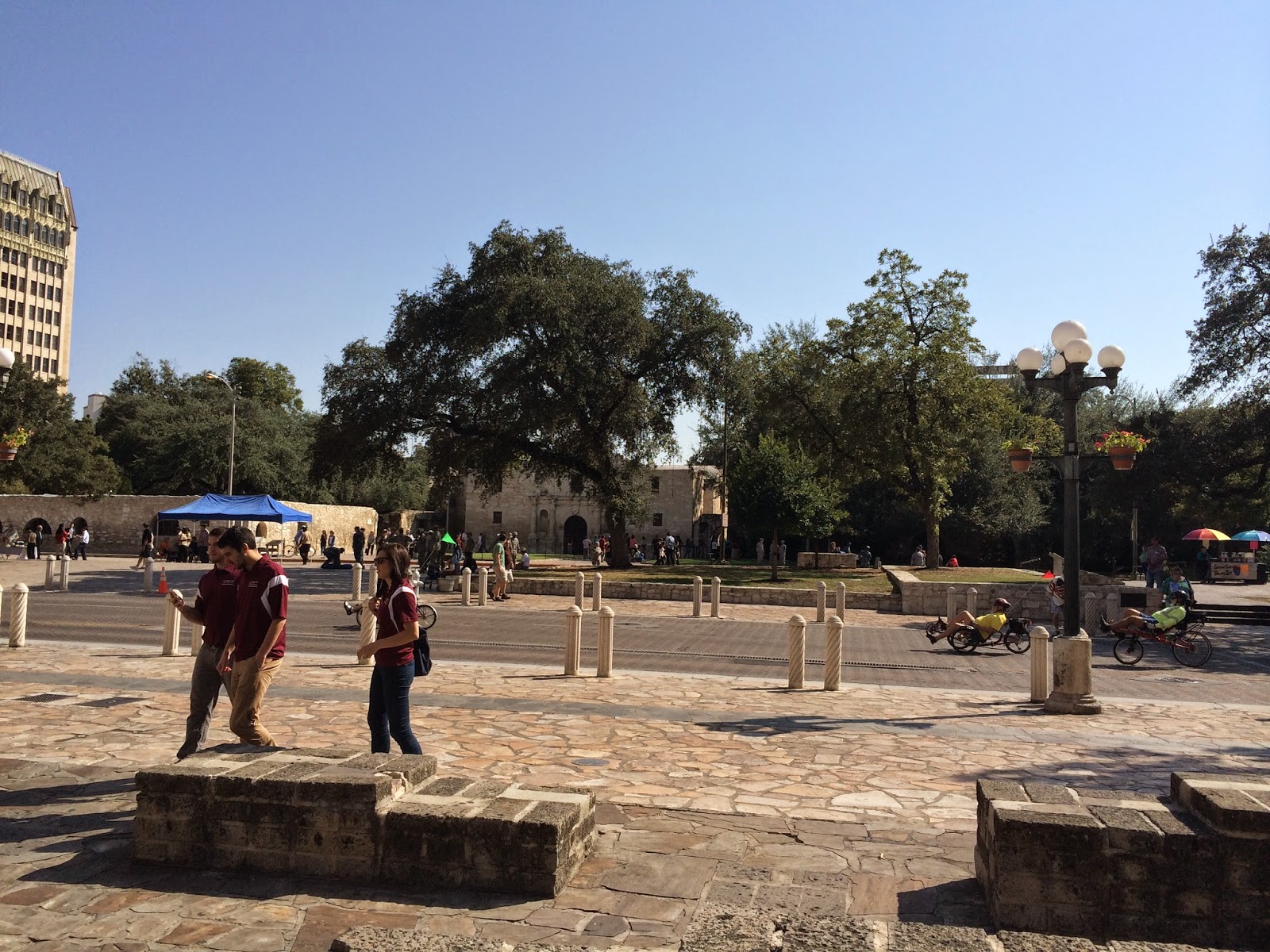 Monument to the Alamo defenders in the plaza 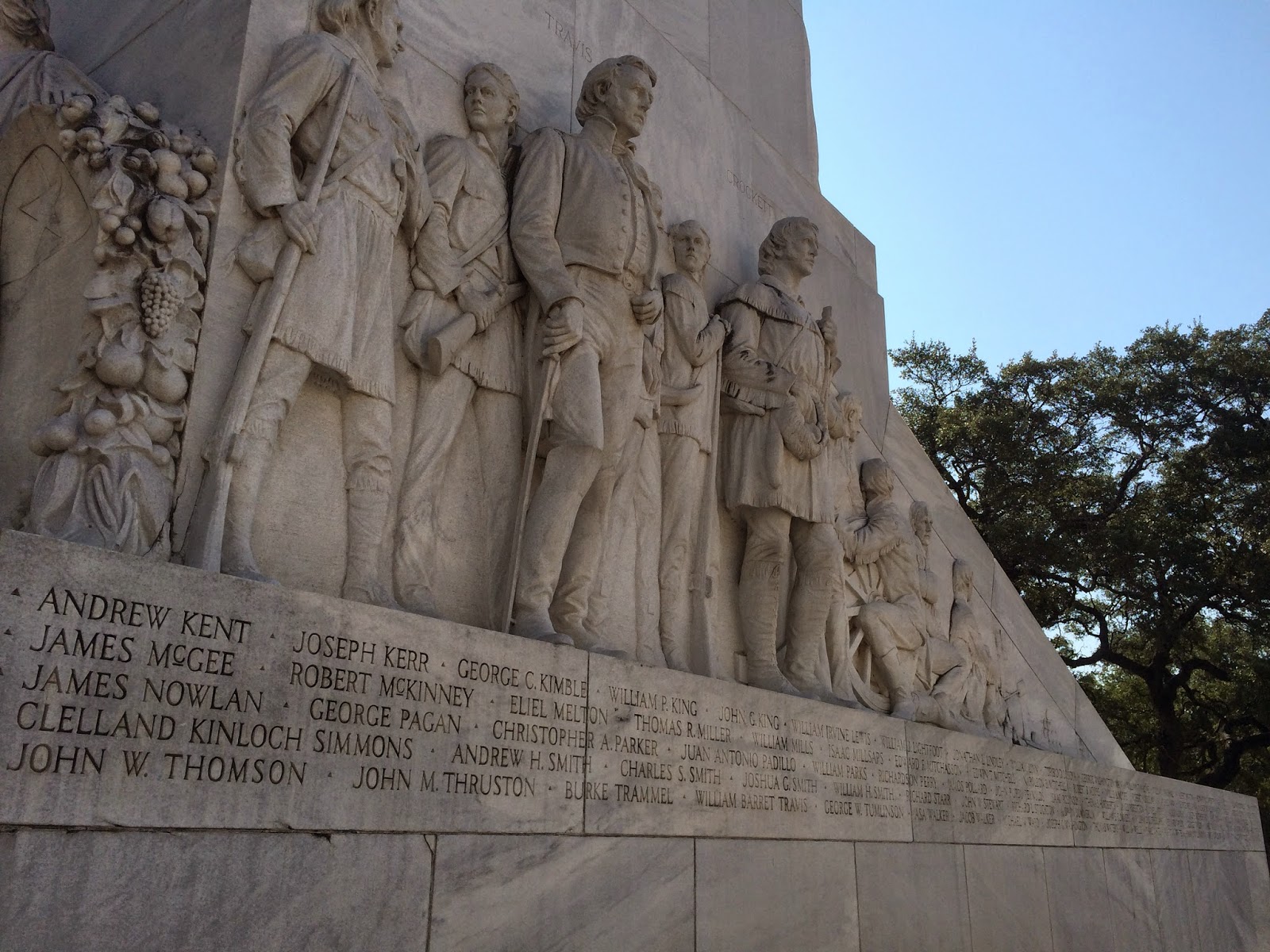 Ripley's on top of where the West Wall stood. 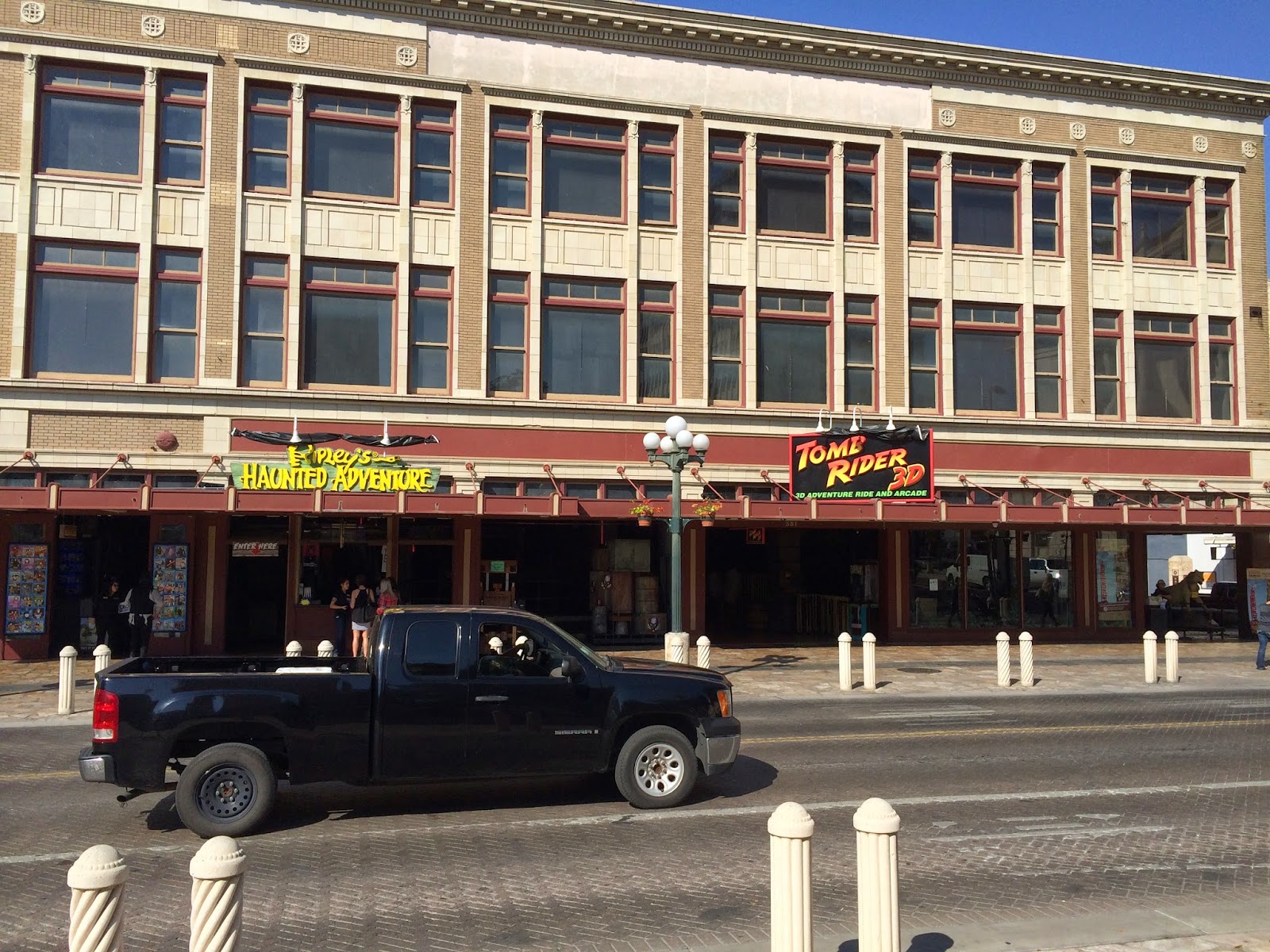 The Long Barracks.  This is where the last defenders held out.  There was hand to hand fighting in the darkness of the rooms in the barracks. 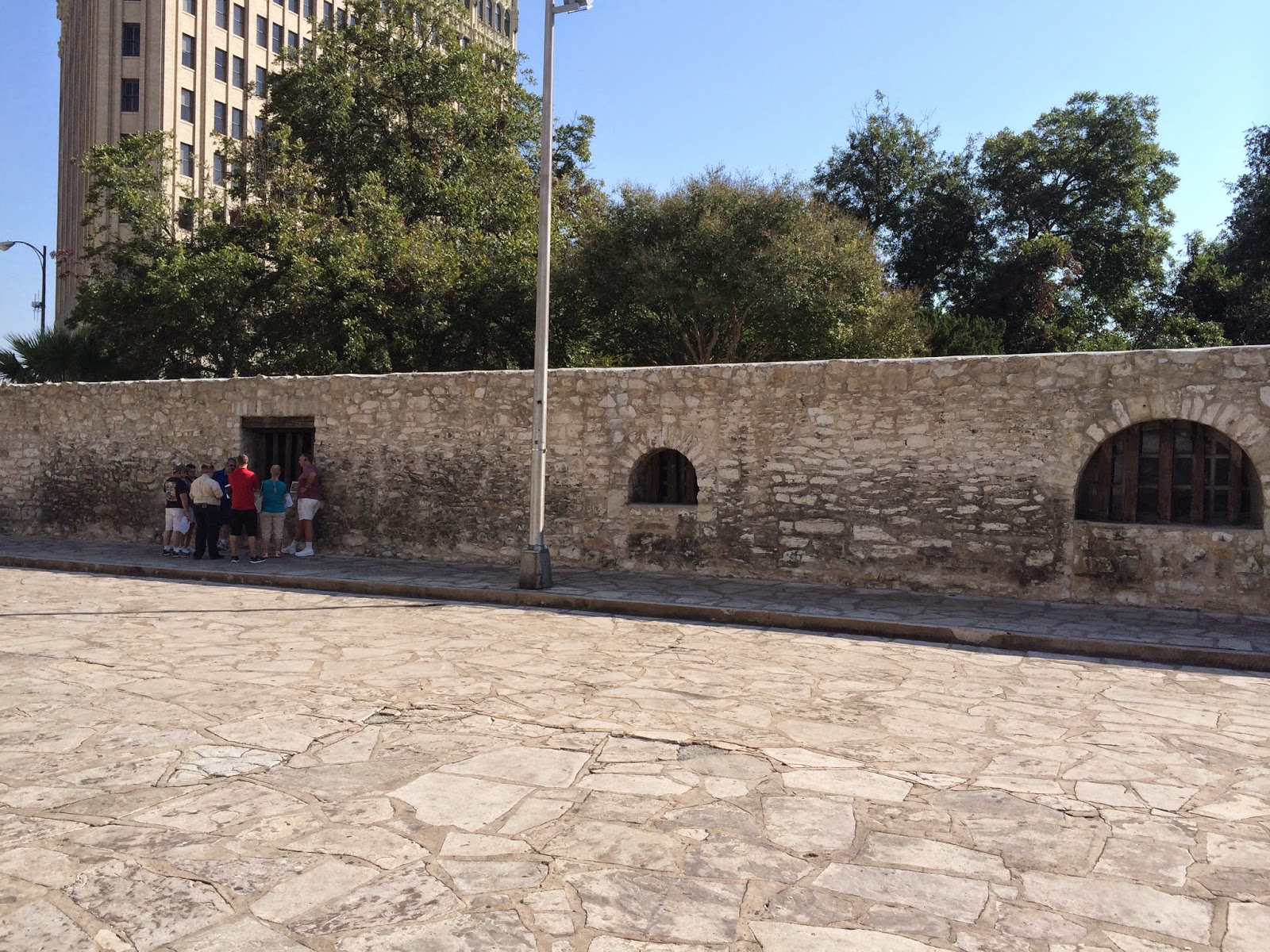 For Part 2:  What Happened To Davy Crockett go here
For Part 3:  The Alamo In TV And Movies go here
Posted by Mark Stoler at 10:00 AM