The Alamo In TV And Movies

THC watched the Disney series on Davy Crockett as a four year old in late 1954 and early 1955.  He still remembers the details of a few scenes, including the last one at the Alamo.

In 1954 Walt Disney signed a deal with ABC to deliver an hour long TV show every week and get the funds he desperately needed to complete the construction of his revolutionary amusement park Disneyland.  The new show, also called Disneyland, premiered on October 27, 1954.  Davy Crockett, Indian Fighter debuted on December 15.  A second episode, Davy Crockett Goes To Congress was broadcast on January 26, 1955 and a third, Davy Crockett At The Alamo aired on February 23, 1955.  The response exceeded Disney's expectations, setting off a nationwide Crockett craze and marketing bonanza which last for most of 1955.  Even the theme song from the show, The Ballad Of Davy Crockett, went to #1 on the charts. And yes, THC proudly wore a coonskin cap. 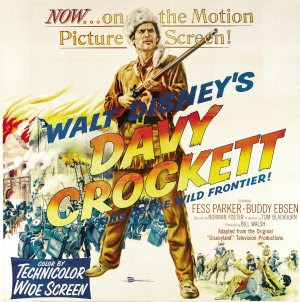 In May 1955 Disney released an edited version of the three episodes as a full length movie, Davy Crockett: King Of The Wild Frontier and late in the year broadcast two more TV episodes, Davy Crockett's Keelboat Race (Nov 16) and Davy Crockett And The River Pirates (Dec 14).  These last two also featured another legendary figure, Mike Fink (1770?-1823), the "King of the Keelboaters".

Disney made a star out of Fess Parker who played Crockett (and a decade later portrayed Daniel Boone in a hit TV series).  His co-star was Buddy Ebsen, who after escaping the Alamo returned to Tennessee, changed his name to Jed Clampett and while out hunting discovered oil, became rich and moved to Beverly - Hills that is.

Some of the series is available on YouTube.  One portion that THC did not remember portrays Crockett speaking in Congress in opposition to Andrew Jackson's request that Congress provide him funds for the removal of the Cherokees and four other southeastern Indian tribes; you can watch the segment below.  David Crockett really did speak in Congress in opposition though the Disney speech is just a mite different.  The measure passed by only five votes (102-97).  Crockett is portrayed as wearing a buckskin outfit which is not what he wore in Washington.  The picture of him in Part 2 shows the type of clothing he normally wore.
And here is the climax of Davy Crockett At The Alamo which shows Davy atop the north wall with the screen fading out as he's swinging his musket.  He's wearing a coonskin cap but as far as we know David Crockett did not wear coonskin caps at all, though it appears Davy Crockett did.   It also shows Bowie's death, though being debilitated by illness it's an open question whether he was conscious of what was going on around him by that time. The Alamo you see is much smaller than the real thing which had a three-acre open plaza in the middle.
As far as historical accuracy some of the basic framework of the Crockett story is right and the series pays attention to the self-awareness of Crockett and his friend about the propagation of the myth of Davy Crockett but overall it's not very accurate, though not nearly as awful as They Died With Their Boots On, the 1941 George Armstrong Custer biopic starring Errol Flynn.

In 1960 came The Alamo, directed by John Wayne, who also starred as Davy Crockett.  Co-starring Richard Widmark as Jim Bowie and Laurence Harvey as William Travis the film was a commercial failure and deservedly so.   While Wayne made many classic movies this is definitely not one of them.  Both as history and movie it is terrible.

The scene below shows the end of the battle and Crockett's death.  Like the Disney series, The Alamo shows the attack taking place in full daylight while in reality it started in pitch darkness at 5am and ended as the sun was rising.  Once again Crockett is inaccurately shown wearing buckskins and a coonskin cap.  Unlike the Disney series it does show Crockett in the area of the Alamo we think most likely to have been his post but it also has him blowing himself up by putting a torch to the powder magazine which is completely fanciful.  Jim Bowie is seen dying on a bed that is placed outside while he was actually confined to his room, dying and delirious.  Pretty much everything that happens earlier in the movie is also wrong. [NOTE: The sound doesn't work quite right on this clip but it doesn't make any difference!]


The next attempt to show the battle in a movie was The Alamo (2004).  Originally intended as a $200 million budget blockbuster, with Ron Howard directing, it was scaled back to a $100 million budget and directed by John Lee Hancock, a Texas native and one of the screenwriters.  Starring Billy Bob Thornton as Crockett, Jason Patric as Bowie, Patrick Wilson as Travis, Dennis Quaid as Houston and Emilio Echevarria as Santa Anna it was another box office disaster.

THC has a soft spot for the 2004 movie.  Unlike Wayne's version it is somber, not stirring. It's uneven, some scenes sit there inert amidst clumps of clumsy dialogue, Quaid is lousy as Houston (the movie ends with the battle of San Jacinto) and Santa Anna is treated as a cardboard clown, but at the same time there are some very moving and subtle scenes, sparkling passages of dialogue (Travis and Bowie talking near the end, Crockett telling of his Indian fighting days around the campfire), Patric and Wilson are well-cast, the Mexican attack starts in the darkness and as history it is pretty well done; the sets and costumes are accurate and some of the ethnic complexities of the times are captured, particularly in the portrayal of Juan Seguin, a tejano who supported the revolution (though several years later he fled to Mexico as Anglo intolerance increased).  Most of all Thornton is just wonderful as Crockett, capturing David's awareness that he's also Davy Crockett and his ambivalence about it, at times reveling in playing the role and at other times feeling trapped by Davy.  At one point he tells Bowie:


If it was just me, simple old David from Tennessee, I might drop over that wall and take my chances but that Davy Crockett fella, they're all watching him.

This is the somewhat overwrought trailer:
This clip shows events on February 23 when Bowie's attempt to parley was interrupted by Travis' cannon shot.  In the scene you can see that Bowie seems familiar with General Castrillon which is an accurate portrayal.  When he came to Texas, Bowie married into one of the oldest and wealthiest Tejano families in San Antonio and he knew many senior Mexican officials.  His wife and most of her family died of fever leaving Bowie devastated.  The movie portrays him as a fatalistic and morose figure.
The most controversial scene in the movie is Crockett's death.  At the end of the prior scene we've seen Crockett and a few of his surviving men retreat into the church as Mexican soldiers overwhelm their position; the Mexicans charge and David and his men brace themselves.  The screen goes black and then suddenly we are in daylight.  This is the first time a version resembling the de la Pena account has been shown on screen.  The filmmakers do a good job meshing the David and Davy aspects together (you can hear Crockett muttering to himself "Davy Crockett" as he realizes he must play the role one last time).   It still wasn't enough for some folks who were outraged that Davy was not seen going down fighting but for THC, who admires Crockett and thinks that something along the lines of de la Pena account is likely true, it's a thumbs up.