Speech by Bill James, the man who led the way in creating a new way to look at baseball by asking questions no one had asked before, at a baseball fiction conference in Ottawa, Kansas.  Read the whole thing.

In the course of his speech, James makes an admission that resonated with THC:


At this point I have a confession to make.   Since I was twelve years old I have obsessively created what I think of as mythical careers for imaginary baseball players, which we will call for today’s purposes Fictional careers.    I create them every day; I am not saying that I never, ever miss a day, but there won’t be 15 days in a year that I don’t do it.  I have been doing this for more than a half a century.  I have invented hundreds of different ways to create fictional careers for baseball players.

If you scroll down into the comments you'll see many wrote in to confess they did the same.  So did THC when he was younger.

James is talking about the story made-up numbers told by made up numbers like those below and Bill's ambition to create a fictional Baseball Encyclopedia full of the intertwined lives of baseball players who never existed.

This is why you can do it:


This talk is about a dead dream of mine.   Since the 1970s, I have been fascinated by the notion that meaningful fiction could be created with numbers, or, to be more technically accurate, could be created in the form of a Baseball Encyclopedia.    Baseball statistics, more than the statistics attached to almost any other human activity, or entirely unlike other statistics, have the capacity to create stories.    The reason this is true is that the way that baseball statistics are processed by most people most of the time is as images of different skills and character traits. 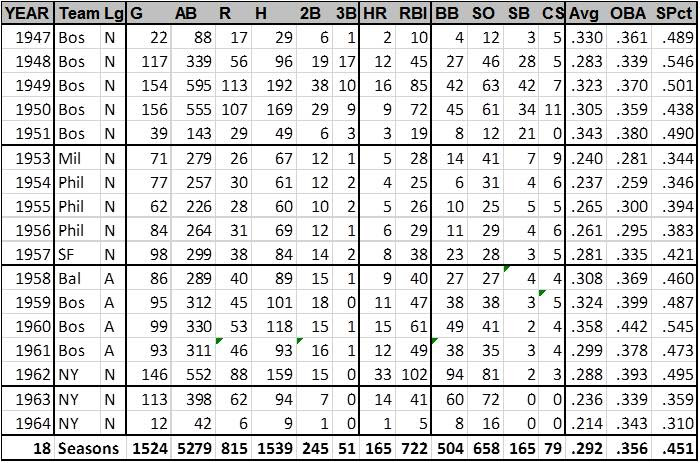 It's an idea that will certainly appeal to anyone who loves baseball, but it is also about a something bigger. The ability to conjure up fictional realities out of scraps of information.  James uses a baseball template because that is what he knows best and all of us who've spent time with baseball statistics know they represent something more than the numbers themselves - they help paint a picture of a person.

The numbers above tell the poignant story of a potential Hall of Fame career derailed by injuries; of a hitter who painfully reconstructed a career over a period of years, capped by one spectacular season late in his career abetted by playing in a ballpark favoring pull hitters like himself, only to see age and a change in the strike zone catch up with him the following year.  He was probably an outfielder, not more than 6 feet tall and weighing, at most, 180 pounds.

James goes on to explain more about what these numbers mean:


Baseball statistics can be keys not merely to physical attributes, but to character and personality.   If a player is exactly the same year in and year out—that is, if he is CONSISTENT—like Gil Hodges, Henry Aaron, Luis Aparicio, Bobby Abreu or Tom Glavine—it may be assumed that he is a solid, stable, mature individual; I suppose this could be proven untrue, but I don’t know of any case in which it was untrue.   The consistency of the record can be seen as a psychological test of consistency, although we should note that there are in fact stable, consistent people who have highly inconsistent records because of injuries and other factors.   If a player controls the strike zone and maximizes his performance in other related ways, it may be assumed that he is probably an intelligent person, although I have certainly seen cases in which this did not seem to be true.

And it is here that Bill James reveals his dream to create an entire world with his Baseball Encyclopedia:

The value in what I am talking about, I think, is not in what could be done, but that it pushes us to think about "What is fiction?"   Good fiction, great fiction has psychological depth, it has imagery, it has cultural resonance.   Good fiction creates a world and draws the reader into that world, where the reader may feel regret, terror, anxiety, hope, exhilaration and relief within the pages of words.   Bad fiction is simply made up stuff.   I am not arguing that fiction created with numbers could do ALL of those things that good fiction does; I am arguing that it could do some of those things very successfully.   It could create a world of imagination, in which certain stories, which I acknowledge are stories of limited depth and power but which are stories of almost infinite variety, can be told.