"When You Have To Shoot, Shoot, Don't Talk" 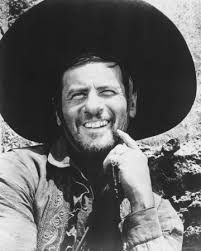 Eli Wallach passed away yesterday at the age of 98.  His first TV appearance was in 1949 and his last movie (Wall Street: Money Never Sleeps) was released in 2010.  In between he was a constant presence on film and TV.  During his peak he appeared in 40 movies in 17 years (1962-78) and in 1990 was Al Pacino's nemesis in The Godfather Part III.  Even if you didn't know his name you knew his face was familiar and you always enjoyed his performance. His wife, the actress Anne Jackson, to whom he was married for 66 years, survives him.  For a very entertaining look at his career, with some great clips and photos read the obituary by The Telegraph (UK).
(Anne Jackson)
He was well known for many of his roles but there are two in particular that remain in constant rotation on cable TV.  Wallach played Tuco in Sergio Leone's classic The Good, The Bad and The Ugly in which he co-starred with Clint Eastwood and Lee Van Cleef (Eli said he didn't know until the film was released that he was The Ugly).  Here is Wallach as Tuco in some clips from the film from which the title of this post is taken. He also played the Mexican bandit, Calverra, in The Magnificent Seven.

And at TCM.com you can watch Wallach dance with Marilyn Monroe in The Misfits (1961) or, if you prefer, you can concentrate on Marilyn.  The clip starts off with this guy Clark Gable but Eli shows up soon after. Marilyn apparently felt Eli was upstaging her in this scene and remarked "The audience is going to find my ass more interesting than Eli’s face".

Email ThisBlogThis!Share to TwitterShare to FacebookShare to Pinterest
Labels: Movies