On June 12, 1864 General Ulysses S Grant began a daring series of maneuvers with the Army of the Potomac designed to end its 40-day slugging match with Robert E Lee's Army of Northern Virginia (see The Overland Campaign Begins and The Bloody Angle).  He planned to quickly move his army south across the James River and then southwest to capture the city of Petersburg and, more importantly, cut the three railroad lines connecting the city with the rest of the Confederacy.  Upon reaching Petersburg those lines merged into a single line headed to Richmond, the Rebel capital only twenty miles further north.  Grant believed severing the rail link and its supply capabilities would force Lee into either attacking the Union army on unfavorable grounds or abandoning Richmond and retreating to the west or south towards North Carolina where he would be vulnerable to an attack by the pursuing Army of the Potomac.

On the map below (from civilwar.org), Richmond is near the top center and Petersburg at bottom center with the James River in the center running east and southeast from left to right.  The Union Army was located to the northeast and east of Richmond on June 12.

On June 12, both armies were very different from what they had been on May 4 at the start of the campaign.   Those who had survived the prior forty days were exhausted, stressed and in many cases, lacking the fighting spirit of just six weeks before.  For the entire year of 1863 a typical soldier in each army might have been exposed to 5 to 7 days of combat; infantry assault/defense or direct exposure to artillery or sharpshooters.  By June 12, 1864 many soldiers had already seen 20 or more days of such combat.

The impact was larger on the Army of the Potomac which was mostly on the offensive, constantly attacking while the Southern soldiers were behind increasingly sophisticated entrenchments.  Northern troops were increasingly reluctant to engage in frontal assaults, something the rebel soldiers picked up on.  In his memoir, A Mississippi Rebel in the Army of Northern Virginia, David Holt of the 16th Mississippi wrote of this time:

"We soon notice a change in the tactics of the Yanks.  They were not so eager to try and rush the skirmish line . . .  Grant's plan of hammering Lee was known . . . They said that Lee could not replace the men killed and wounded, while Grant had the world to recruit from. . . . But the Yanks we came up against did not relish being butchered for the sake of wearing out Lee's Army."


This culminated in the fatalism shown by Union soldiers before the June 3 assaults across open ground at Cold Harbor where they pinned notes containing their names to the backs of each others uniforms so they could be identified when killed.

(Collecting the dead at Cold Harbor, a year later)
Because of the staggering casualties the actual make up of each army was different by mid-June.  On the Union side along with the casualties, thousands of other soldiers were leaving the ranks in June, July and August as their three-year enlistments in response to President Lincoln's 1861 request for volunteers meant that they would be going home in the midst of the campaign.  Grant had bodies to replace them, but not experienced soldiers.  There were newly drafted men along with about 30,000 from heavy artillery units that had been stationed in the fortifications around Washington DC for the past two years.  These soldiers were converted to infantrymen and sent to the front.  When the first of these units to enter combat encountered rebel forces near Spotsylvania Court House on May 19 they stood their ground but took heavy casualties because of its lack of experience.

This left the Union Army with a remnant of experienced soldiers who were no longer anxious to participate in headlong attacks, thousands of inexperienced new recruits and garrison soldiers and an officer corps which had suffered heavy losses, with many new replacements and lacking aggressiveness in key positions.

For the Confederates, while their losses had been significantly less, as a percentage of its smaller army they were almost as high as the Union.  Moreover, the Army of Northern Virginia was done as an offensive threat.  Longstreet's counterattack on May 6 in The Wilderness was the last large-scale assault the army would ever undertake.  While the North's superior logistics ensured the Army of the Potomac had adequate food and ammunition, the memoirs of Southern soldiers speak of constantly having very little to eat.  And unlike the North, the South had limited ability to replace its losses.  The only bright spots were that it was easier to fight on the defensive, protected by the every growing entrenchments and supported by the soldiers' eternal faith that Lee would find a way out of the mess.

The initial part of Grant's plan went well.  Union units began moving south on the 12th and the longest pontoon bridge of the war (2200 feet) was constructed across the James River.  For several days, Lee was unaware of the large-scale movement and 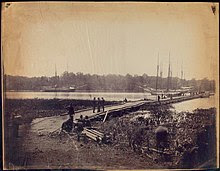 (Pontoon bridge from Wikipedia)  failed to realize that Grant's objective was Petersburg.  By June 15, Union Army was approaching the outskirts of Petersburg.  The defense of Petersburg was in the hands of General Pierre Gustave Toutant Beauregard, who had presided over the attack on Fort Sumter that started the war and then commanded the Confederate Army at the First Battle of Bull Run, both in 1861. 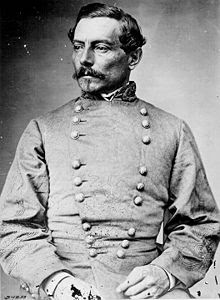 (Gen. Beauregard)
On that first day, General Beauregard only had 2,200 men to defend against the 16,000 Union soldiers commanded by General "Baldy" Smith.  General Smith, remembering the slaughter at Cold Harbor, first undertook extensive reconnaissance of the Confederate position and then continued to hesitate to launch an attack until that evening though as Beauregard latter admitted, Petersburg was "there for the taking".  Smith did not press the assault and after hitting initial resistance decided to wait until the next morning to take the city.  Meanwhile, Beauregard, while still greatly outnumbered was able to bring up additional troops.  The next two days followed the same pattern.  Northern forces launched uncoordinated attacks which were not pressed.  Finally, on June 18, General Meade ordered a general assault by the Army of the Potomac.  Though still outnumbered the Confederates had been able to strengthen their earthworks and repulsed the Union forces with great losses.  It was in this action that Joshua Lawrence Chamberlain, a hero of Gettysburg, was shot through the hips and thought to be mortally wounded (see In Great Deeds Something Abides).

It was also in the June 18 attack that the 1st Maine Heavy Artillery Regiment, one of the units formerly defending Washington but now deployed as infantry, suffered the heaviest losses of any Union regiment during the war with 632 of its 900 men being killed, wounded or missing.  Many of the soldiers were from Mount Desert Island in Maine, where the THC Family has vacationed for many years, and the June 12, 2014 edition of the Mount Desert Islander featured an article by Tim Garrity commemorating the 150th anniversary of its assault..

The attack was launched across 500 yards of open ground against a fortified Confederate line.  Garrity quotes a survivor:

"The enemy's firing along their whole line was now centered into this field.  The earth was literally torn up with iron and lead.  The field became a burning, seething, crashing, hissing hell . . . So in ten minutes those who were not slaughtered had returned to the road or were lying prostrate upon that awful field of carnage."


Garrity quotes another survivor, Samuel Savage of Mount Desert who wrote to his sister-in-law that he was:

"lonesome for all the island boys are gone . . . What did it amount to?  I doubt if a man on the Union side saw a Confederate during the charge.  They were completely sheltered by a strong earthwork."


The attack highlighted the deficiencies in the battered Army of the Potomac.  The Mainers, inexperienced but ready to prove their bravery, proudly marched into the furnace.  The more experienced veteran regiments expected to follow the 1st Maine, the 16th Massachusetts and the 7th New Jersey, held back.  Garrity writes:

"But the 1st Maine went into the assault alone.  Most of the nearby regiments were composed of disillusioned and exhausted veterans who cried 'Played out!  Let the 1st Maine go!'"


As a soldier from another regiment wrote:

"The old campaigners were in front and knew better than to charge through a slaughterpen." 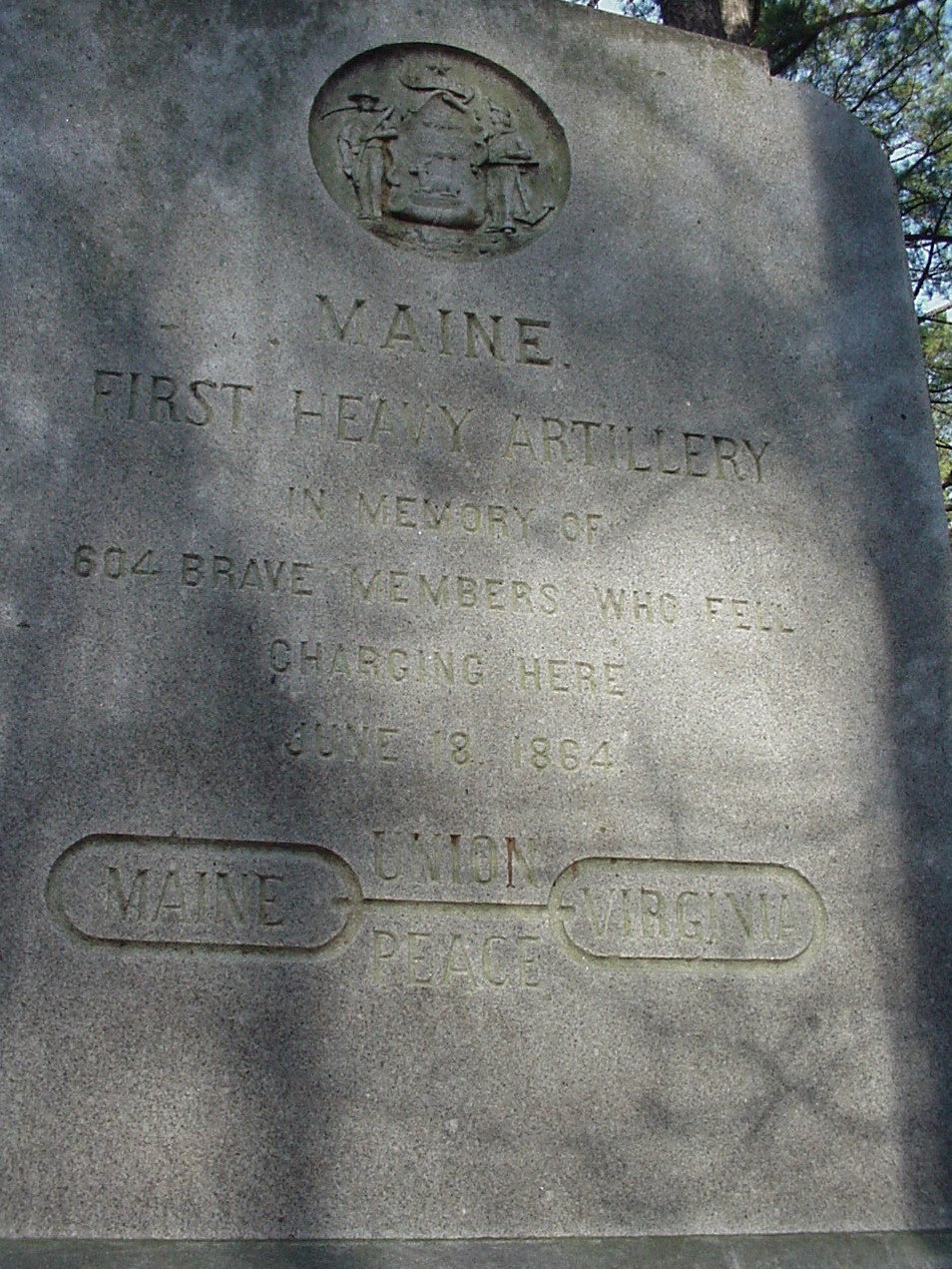 (Monument to 1st Maine at Petersburg)
After the failure of June 18, the Union army stopped the attacks and settled down into a siege of the city which was to continue until April 2, 1865.  The failure to aggressively move forward on June 15 and 16 when Petersburg could have, and should have been seized, was to cost thousands of additional lives from combat and sickness during the long months of the siege and ended any chance of bringing the Civil War to a conclusion in 1864.