On July 21, 1883 the National Police Gazette ran a picture which has since become one of the most famous photographs of the western frontier.  It depicts members of the Dodge City Peace Commission who were involved in the Dodge City (Kansas) War of 1883, a war settled without any shots being fired.

There are two names THC is sure most of you will know, Wyatt Earp (1848-1929) and Bat Masterson (1853-1921).  The tale of Wyatt's adventures in Tombstone, Arizona is told in OK Corralapalooza.  Bat Masterson was an old friend, meeting Wyatt when he was a deputy sheriff in Dodge City in the 1870s and then following him to Tombstone for a while.  After spending time as a lawman, as well as having several brushes with the law, Masterson ended up in New York City where, in 1908, he was appointed Deputy US Marshall for the Southern District of New York by none other than President Theodore Roosevelt who had become an acquaintance.  From 1903 Bat also was a sportswriter and columnist for the New York Morning Telegraph writing three weekly columns and eventually becoming editor of the sports page.  He died at his desk in 1921 just after completing his final column and is buried in Woodlawn Cemetery in the Bronx.

Like Earp and Masterson the others are of a type; at various times lawmen, gamblers, gunfighters, miners, buffalo hunters, miscreants and wanderers.

Luke Short (1854-93) was a cowboy and gambler who sold whiskey to the Indians and murdered several Sioux in the process.  He met Wyatt and Bat in Dodge and in 1881 was hired as a faro dealer by Earp in Tombstone where in a notorious incident he shot Charlies Storms outside the Oriental Hotel.  After the 1883 Dodge City War he migrated to Fort Worth, Texas where he shot and killed Longhair Jim Courtwright, the town's former marshal.  Short was acquitted of murder charges and died peacefully a few years later.

Charlie Bassett (1847-96) was the former Dodge City Marshal who hired Wyatt Earp as a Deputy.  After leaving Dodge, Charlie went to New Mexico and then prospected for gold in Montana before returning to Dodge for the 1883 War.

Neal Brown (dates unknown) was a half-Cherokee lawman in Dodge while WH Harris was another friend of Earp, a gambler in Tombstone and, at the time of the war, Vice President of the Dodge City Bank.  He committed suicide in 1895.  Frank McLean (spelling varies) has never been convincingly identified.

WF Petillon is the joker in the deck.  The court clerk of Ford County and later editor of the Dodge City Democrat, he was not a member of the Commission and merely asked to be part of the picture because of the presence of so many famous (and/or notorious) characters.  In another photo of the Commission taken at the same session Petillon is replaced with Bill Tilghman (1854-1924).

(Tilghman)
During the late 19th and early 20th centuries Tilghman may have been the most famous of all the Dodge War participants. Born in Iowa he became a buffalo hunter before moving to Dodge in 1875 where, though a teetotaler, he opened a saloon and met Earp and Masterson.  After Dodge to become a scout for the US Cavalry, Masterson later hired him as a Deputy Sheriff.  By the late 1880s he'd become one of three Marshals in the Oklahoma Territory where he was responsible for apprehending hundreds of outlaws and participating in high profile incidents such as the Battle of Cimarron (1889) and capturing the notorious Doolin Gang in 1895.  Retiring in 1910, he was elected to the Oklahoma State Senate and a year later became Police Chief of Oklahoma City.  After retiring from that job he was persuaded at the age of 70 to become Marshal of the Cromwell, Oklahoma a lawless, violent town.  It was there that Tilghman was shot and killed by a corrupt Prohibition Agent.  A month later the entire town was burned down by unidentified arsonists.  The 1992 Bruce Willis film Last Man Standing is based on a mutated version of the events at Cromwell. Bat Masterson said of Tilghman "he was the greatest of us all".

My thanks to dodgecitypeacecommission.com for some of this biographical information.

It was because of Luke Short, the friend of Wyatt and Bat.  What follows is primarily based upon the well-documented account of Casey Tefertiller in Wyatt Earp: The Life Behind the Legend.

Dodge City was founded in 1872 and for its first decade was the rowdy terminus for Texas cattle drives.  Cowboys would bring the cattle into town where they could be loaded onto railroad cars and shipped to the slaughterhouses in Chicago and when they arrived those cowboys were ready for a good time and it seems like just about every famous Western lawman and outlaw passed through there at one time or another.  Its wildest days were in the 1870s when Earp, Masterson, Bassett, Tilghman and Short were in town and met each other.

In 1883 Short returned to Dodge City where he become part-owner of the Long Branch Saloon.  If the name sounds familiar it's because its the name of the saloon operated by Miss Kitty in Gunsmoke, the longest running series in TV history, which was set in Dodge.  Short's co-owner was WH Harris. 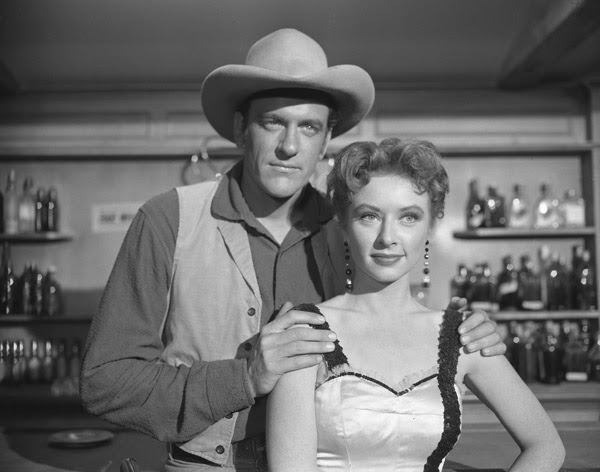 (Miss Kitty with Marshal Dillon)
For several years there had been a political battle for control of the city between a group known as the Dodge City Gang, led by Bat Masterson, and another faction led by Ab Webster, the current mayor and owner of the rival Alamo Saloon located next to the Long Branch.  In early 1883 a mayoral election occurred in which the Gang's candidate was WH Harris and Webster's handpicked choice was Larry Deger, a former city marshal, who the election by a vote of 214 to143.

In the next month the new mayor and town council enacted ordinances banning prostitution and policeman (and Deger ally) Lou Hartman went to the Long Branch and arrested several women.  Realizing that the prostitutes at the Alamo and other saloons had not been arrested, Short strapped on his guns and went to the jail where Hartman, recognizing him, fired and missed. Short fired back, narrowly missing Hartman who tripped and fell, but thinking he had killed the policeman, Short returned to the Long Branch where he barricaded himself until surrendering the next morning after being persuaded Hartman was unharmed.  Short and several associates were charged with assault, denied counsel and marched to the train station, told they were undesirables and given their choice of trains and destinations to leave Dodge.  Short chose to go to Topeka and wired his friend Bat Masterson.  Bat returned from Colorado to join Short and they proceeded to Kansas City where they met with Kansas Governor Glick, another of Bat's many friends.

Called to the state capital by the Governor, WF Petillon supported Short's charges and Glick engaged in several angry telegraph exchanges with Mayor Deger and Sheriff George Hinkle.  Short later said the Governor advised him to return to Dodge but afraid to do so alone, Bat Masterson returned to Colorado to persuade his old friend, Wyatt Earp to come to Dodge.  Wyatt agreed and started pulling together his friends to accompany him.

The confrontation at Dodge and Earp's looming approach created a newspaper sensation.  On May 15 the Kansas City Journal reported Masterson's return which it said would soon be followed by:

"a few other unpleasant gentlemen who are on their way to the tea party at Dodge.  One of them is Wyatt Earp, the famous marshal of Dodge, another is Joe Lowe, otherwise known as "Rowdy Joe"; and still another is "Shotgun Collins"; but worse than all is another ex-citizen and officer of Dodge, the famous Doc Holliday"


This, like many other newspaper reports, was inaccurate; Doc Holliday and other notorious characters did not come to Dodge.  But Earp, with his friends Charlie Bassett, Neal Brown and several others, including Texas Jack Vermillion who accompanied Wyatt on the Vendetta Ride near Tombstone in 1882, did show up.  Getting off the train fully armed and marching up the main street of Dodge to the Long Branch they were sworn in as deputies by constable Prairie Dog Dave Morrow, a supporter of Short, thereby legitimizing their continued carrying of weapons in town.

Earp met with Webster and Deger, whom he knew from his earlier Dodge days, along with the town council, announcing that his purpose was to ensure that Short and Masterson could return and stay as long as they liked if they obeyed the law.  The council offered to allow Short to return for ten days to complete his business but refused to allow Masterson back.  Earp left without saying a word.

Wyatt wired Short and Masterson to come to Dodge.  Both arrived fully armed and refused efforts by a deputy sheriff to get them to surrender their guns.  By this time Webster, Deger and the council members were worried that events had run out of their control and completely intimidated by Earp.  Wyatt arranged for his friends to meet Webster and Deger in the street where they shook hands.  With that, Short and Masterson were welcomed back to town to stay as long as they desired and the Dodge City War ended.

Soon afterwards, the anti-prostitution ordinance was repealed and life returned to normal.  By the end of the year Masterson and Short had left Dodge for good.  The ending is reminiscent of the opening scene of Butch Cassidy and the Sundance Kid, when, to avert a gunfight, Butch asks a gambler who's accused Sundance of cheating to ask both of them to stay and continue the game.  The gambler finally does so and Butch thanks him but says they have to be going and he and Sundance leave without bloodshed.

Email ThisBlogThis!Share to TwitterShare to FacebookShare to Pinterest
Labels: History