In A Shady Grove With Doc Watson 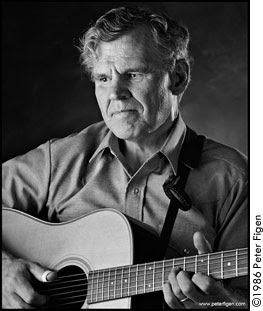 THC's first recollection of Doc Watson is hearing him on Will The Circle Be Unbroken, the 1972 double album by the Nitty Gritty Dirt Band featuring many "old-timey" country artists including Earl Scruggs, Merle Travis, Roy Acuff and Mother Maybelle Carter along with Doc.  THC later saw Doc, and his son Merle, do a wonderful concert in Paris during 1978.  Doc had a great guitar style and his speaking and singing voice was warm and mesmerizing. 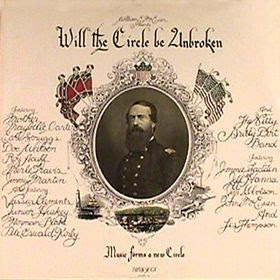 Born in 1923 in Deep Gap, North Carolina way up in the Smoky Mountains, Arthel Lee "Doc" Watson was blind by the age of one due to an eye infection.  Learning guitar he began playing with bands by 1940.   His repertoire encompassed bluegrass, country and folk music and the flatpicking style he developed placed the acoustic guitar as a lead instrument in country and bluegrass.

(Doc with Doc Watson statue in Boone, NC from highcountrypress.com)
Here's Doc performing Black Mountain Rag in 1991.  You'll recognize his version from its inclusion on several movie soundtracks:
This is Doc and the guys performing Tennessee Stud from Will The Circle Be Unbroken.  Just listen to that voice!
And finally, here is Shady Grove.  He starts by talking about how he met Rosa Lee, his wife of 62 years, who died in 2009.  Doc passed away in 2012 at the age of 89.