It was in February 1965 that THC became a devoted listener of AM radio.  He'd watched The Beatles on Ed Sullivan in February and March of '64 and occasionally listened to the radio in the car.  But it wasn't until he was confined to bed for a week in early '65 with a bad cold and sore throat and with a radio by his bed that he began listening every day.  From then until graduating from high school in 1969 he stayed tuned in.

What he was tuned into changed over time.  For the first 2 1/2 years it was two New York AM stations, WABC and less frequently WMCA.  ABC, the home of Cousin Brucie, emphasized the British Invasion bands, American groups like The Beach Boys and Four Seasons with a lot of Motown while MCA was a little more soul oriented playing more Stax and James Brown while also more welcoming to garage bands (today, THC tastes are probably more in MCA's direction).  The AM stations, particularly ABC, had very restricted playlists; the Top 20 (ABC played the #1 song once an hour), a handful of new and quickly rising singles and a smattering of oldies (in those days an oldie meant songs all the way back to 1955).

Things changed in 1966 when the FCC passed a rule requiring that owners of AM and FM stations broadcast different content on each (till that time they often had the same programming).  That created an opening for pop, rock and folk music beyond Top 40 programming.  In late 1966, the first progressive rock format FM station in New York appeared, WOR-FM.  THC's radio by his bed had an FM band (though his family cars did not) and every night he listened to WOR.  His favorite DJs were Scott Muni and William Mercer, better known as Rosko. 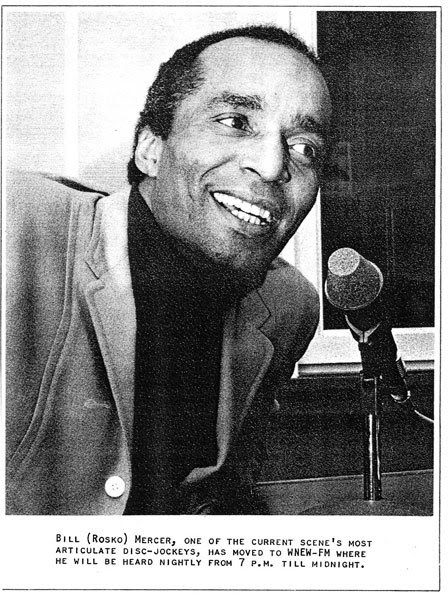 In October 1967 WOR switched formats and Muni and Rosko fled to WNEW-FM which had just adopted the prog rock format.  Between WOR and WNEW, THC heard all sorts of sounds which were never played on AM radio.  It was on WOR he first heard Jimi Hendrix (it was The Wind Cries Mary) as well as Cream's debut album.  The FM stations played the full 7 minute version of Light My Fire by The Doors, not the 3 minute AM hit single (THC thinks Doors music has not aged well, finding it difficult to listen to today).  You could hear groups that never had a hit single. They'd play full albums from start to finish along with all of Alice's Restaurant and all of the endless Inna Gadda Da Vida by Iron Butterfly (which was actually pretty unbearable).  Sometimes Rosko would just recite poetry. It was on WNEW that THC first heard about Woodstock; tickets were $25 for all three nights. The sound of FM was cleaner and crisper than AM and the DJs a lot calmer.  Most of all there were fewer commercials and Muni and Rosko much cooler than the AM DJs.

You might hear an unbroken by commercial sequence (on AM you never heard more than two songs without a commercial break) starting with a Tom Paxton song, followed by River Deep Mountain High from Ike & Tina Turner, move to Badge by Cream, then the spooky Lord Of The Manor from The Everly Brothers (at a time when they were no longer played on AM stations), The Doors doing Kurt Weill's Alabama Song (and maybe if it was real late a double play with End Of The Night), Wind by Circus Maximus and closing with Wake Me, Shake Me (if it was late you might hear Flute Thing instead) by The Blues Project, featuring Al Kooper and Steve Katz who went on to found Blood, Sweat & Tears.  The sequences got weirder as the night grew later.

You can listen to some Rosko if you go to this article and scroll down to the embedded audio.

And the start of this video includes a minute of narration from Scott Muni and then goes on to tell the story of the origins of WNEW-FM.