This is one of those posts THC has been meaning to write for quite a while but just never got around to.

In 2005, THC and the THC Son saw Syriana, a movie starring George Clooney.  Watching it THC made a connection with a prior Clooney film from 1999; Three Kings (which he enjoyed much more than Syriana).  As they exited the theater, THC remarked to his son that it was amazing that George Clooney had made two Hollywood movies promoting the neo-conservative view of the Middle East, which he found remarkable in light of what he knew of the political views Clooney had been publicly expressing.

Why are these films neo-conservative (a category THC does not include himself in)?

Three Kings is set in the immediate aftermath of the Gulf War in 1991 during which American troops and their allies expelled Saddam Hussein from Kuwait.  To do so they executed a flanking maneuver which took them into Iraq and resulted in the destruction of much of the Iraqi army.  Although Saddam's army had been greatly damaged and his regime weakened, the U.S. and its allies took the view that the purpose of the war, freeing Kuwait and eliminated Saddam's threat to Saudi Arabia, had been accomplished and our forces would not penetrate further into Iraq.

An agreement was quickly reached between the allies and Saddam which included forbidding the Iraqi air force to fly.  However, importantly it did not forbid the Iraqis from using their helicopters.  At the same time allied propaganda urged dissatisfied Iraqis to rise up against Saddam.

Two groups which had been violently suppressed by Saddam did rise up; Shiite Arabs in the south and the Kurds in the north.  When that happened the remnants of the Iraqi army, supported by helicopter gunships ruthlessly put down the rebellion.  When both groups asked for military support from the U.S. they were denied help.  The Shiites were slaughtered and left on their own.  After the Kurds were crushed and began fleeing to the mountains and into Turkey, the U.S., with allied support, did establish no-fly zones in the north and south of the country and provided relief to the Kurds, but not the Shiites. 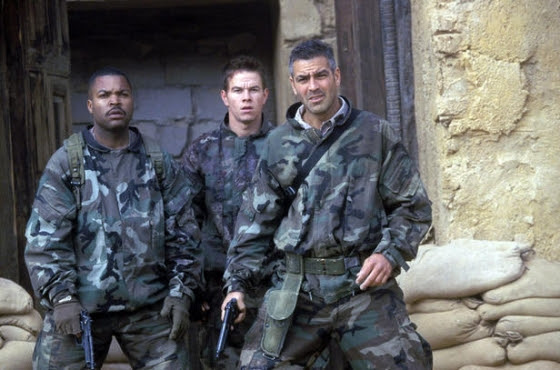 The plot of Three Kings takes place right after the ceasefire and revolves around a small army unit, commanded by Clooney (with a great supporting cast of Mark Walberg, Ice Cube and Spike Jonze) who go off on a freelance mission to seize Iraqi gold bullion from an underground bunker and make themselves rich.  Along the way, they witness the brutality of the Iraqi army against helpless Shiites and encounter a band of Shiite refugees desperately seeking to stay alive and reach safety in Iran.  Giving up their gold, Clooney and his men end up getting the Shiites across the border.  This is a very good film and THC recommends you watch it if you've not done so previously. Clooney is excellent in it but still thinks his best role was in Out Of Sight.

The film also makes its viewpoint clear; the war, for U.S and the West was only about oil when it should have been about helping these desperate people against a brutal dictator.

For the George HW Bush administration it was about the oil and the economic and security damage Saddam could cause if he controlled Kuwait and threatened the Saudis.  And, in fact, oil can be a legitimate reason to go to war.  But it was definitely not about the Shiites and the Kurds and saving them from Saddam.  It fact, it wasn't about saving anyone other than Kuwaitis and Saudis.  To entice  Syria, ruled by that noted murderer Hafez Assad, to join the allied coalition, Secretary of State James Baker gave him a free hand in Lebanon, ending Lebanese attempts at the end of their own civil war to restore a united country and government and left them under direct Syrian domination for 15 years as well as strengthening Hezbollah's grip on South Lebanon which was also a goal of Syria's main ally, Iran.

The people most loudly protesting Bush's decision not to support the Shiites and Kurds were the neo-cons who saw the U.S. as having a moral and humanitarian duty, particularly after urging the uprisings and because it might result in the toppling of Saddam; a message completely consistent with the theme of Three Kings.

Syriana is a much more confusing film than Three Kings.  Once again starring Clooney, who was also Executive Producer, and also featuring Matt Damon, Jeffrey Wright and Christopher Plummer it tells an overly convoluted and improbable tale that seems to be about American oil companies plotting to maintain and expand their control of Middle Eastern oil (see footnote 1 below) and CIA complicity in that effort with most Westerners viewing Arabs cynically not as people but merely tools to be manipulated.  Clooney plays a CIA agent who stumbles into this mess, begins seeing the Arabs as real people yearning for the same things as we in the West and tries to set things right but gets killed by his fellow American bad guys for his trouble.  THC guesses his death was worth it as he won the Academy Award for Best Supporting Actor for the role.

What struck THC in watching the film was that the attitude of the Clooney character was precisely in line with people like Paul Wolfowitz and other neo-conservatives who saw the overthrowing of Saddam as an opportunity to end oppression and introduce democracy into the Arab world which could then spark a greater move towards democracy in that part of the world.  Instead of treating Arabs as pieces to be moved on a strategic playing field they looked at them as people with aspirations like ours and just as portrayed in Clooney's films. George W Bush's embrace of the humanitarian, democracy and nation building agenda of the neo-conservatives horrified the conservative realists of his father's administration like Jim Baker and Brent Scowcroft (and for that matter, Dick Cheney).  And it wasn't only conservative realists who were horrified; the progressive foreign policy realist Barack Obama, while opposing the Iraq Surge in 2007, stated that preventing a potential genocide was not a good reason for keeping our military in Iraq.

The neo-con/Clooney approach towards the Arab world continued into the Arab Spring of 2011 with American neo-conservatives supporting the uprising, expressing optimism that a new wave of freedom and democracy was being unleashed.  Interesting enough, the Israeli government heatedly disagreed with the neo-conservatives taking the position that the revolts would just lead to even worse elements in the Arab world running these countries.

So that's why THC considers George Clooney a neo-conservative.


FOOTNOTE 1: This odd fixation about American oil interests controlling or plotting to control Middle Eastern oil is some leftover remnant from the world as it existed in the 1960s when these companies really did have power in that region.  But that world hasn't existed since the Arab oil embargo in 1973.  Do the people who still believe in that live in some kind of time warp?

When the West crumbled in response to the embargo it let the Arab countries (and Iran) take over the real control of the oil in their countries.  The Western oil companies now effectively work for them and now provide lobbying support for these countries interests with the U.S. government.  Wait till you see what happens if the Iran embargo is dropped.  Western countries will flood into Iran and once they have substantial investments in place will end up lobbying Western governments on behalf of Iran.