Attack launched north of River Somme this morning at 7:30a.m., in conjunction with French.
British troops have broken into German forward system of defenses on front of 16 miles.
Fighting is continuing.
French attack on our immediate right proceeds equally satisfactorily.

By the end of the day both sides had seen, in a sad scrawl of broken earth and murdered men, the answer to the question.  No road.  No thoroughfare.  Neither race had won, nor could win, the War.  The War had won, and would go on winning.

- Edmund Blunden as quoted in The Great War And Modern Memory

Another grim anniversary this week; a reminder of how Europe spent the first half of the 20th century turning itself into a charnel house.  Also timely, because the creation of the Common Market, later transformed into the European Union, was meant to put an end to such conflicts, though perhaps the long Cold War (1945-91) had as much a role in that success. The young EU, which created a freer flow of goods and people, was successful in its modest goals and means.  But, as often happens, as elites become convinced of their essential goodness and contemptuous and mistrustful of "the people", we saw, beginning in the 1990s, a bigger and bigger grab of power, along with an increasing disregard of the expressed preferences of citizens in its member states.  Adults tend not to like it when you tell them you know how to better make decisions for them than they do for themselves. Ironically, it is this very overreach by the elites that may lead to the failure of its grand project to create a new European, worthy of being governed by Brussels bureaucrats and Davos man.

You may be puzzled by my reference to an anniversary regarding a post entitled "July 1, 1916".  That is the traditional date used to designate the start of the Battle of the Somme.  However, if you were a British artilleryman or a German soldier huddled in a dugout along the trench lines, you'd consider June 24 the start of the battle.  That's when the British (and, to a lesser extent, their French allies) began a 7-day artillery bombardment in preparation for the July 1 attack.  During that period about 1.7 million rounds were fired from over 1,400 field guns and heavy artillery along a 15-mile front. 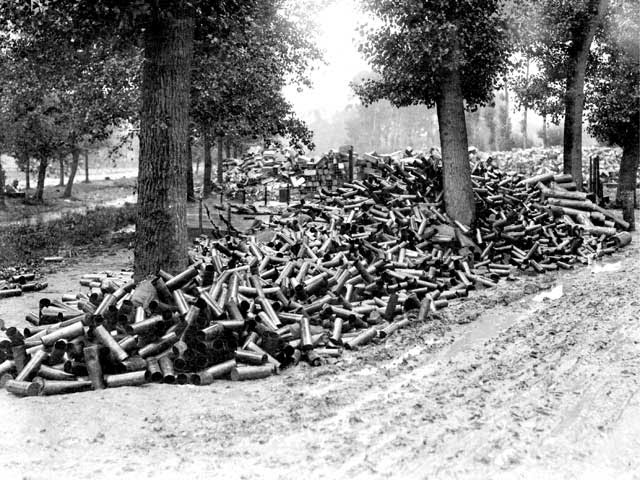 (Shell casings, from first day of artillery bombardment, from longlongtrail)

Unfortunately, enough German soldiers survived the shelling so that in the interval between its cessation and the start of the infantry assault, they were able to scramble out of the dugouts and man their deadly machine guns. The result that first day was 60,000 British casualties, including nearly 20,000 dead.  Before the battle wound down to its dreary end in mid-November somewhere between 1.1 and 1.3 million British, French and German soldiers would be killed, wounded or captured, and despite the overly optimistic British communique of the first day, all for the gain of just a few miles by the Allies.
Posted by Mark Stoler at 2:30 PM