Zulu: The Washing Of The Spears

I first came across the tale of Rorke's Drift in a long-forgotten collection of stirring deeds written for children.  I could not have been more than ten years old at the time . . .

- Donald R Morris from the Introduction to The Washing Of The Spears: The Rise and Fall of the Zulu Nation (1965) 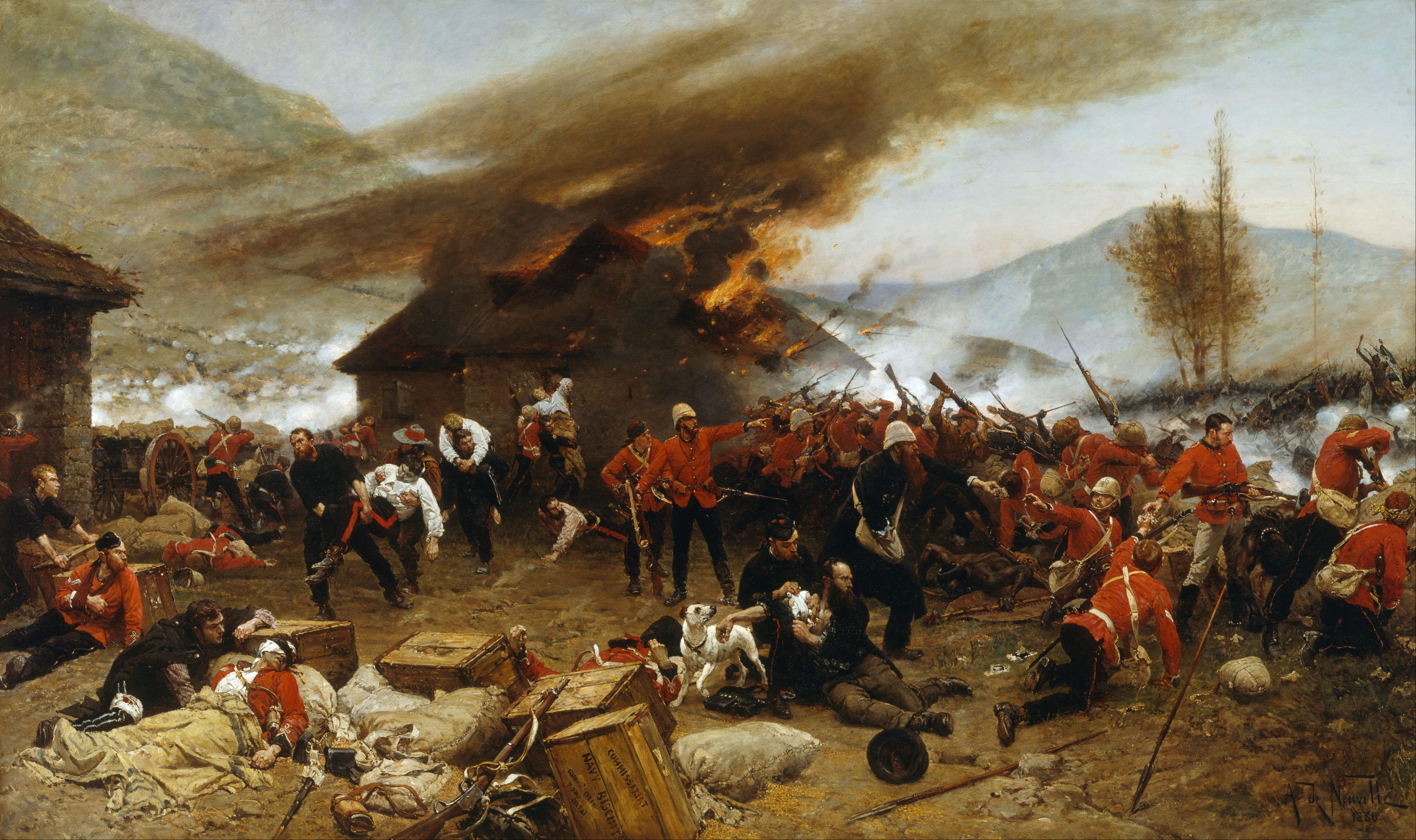 (The Defense of Rorke's Drift, Alphonse de Neuville, 1880, from wikpedia)

Donald Morris (1924-2002) began research for The Washing of the Spears in 1956, completing the bulk of it between 1958 and 1962 when, according to the 1965 introduction to his book, he was "a naval officer stationed in Berlin".  Fascinated by the Battle of Rorke's Drift, which occurred on January 22-3, 1879, and the stunning defeat of the British Army by the Zulus at Isandhlwana, earlier that same day, he planned to write a magazine article on the battles, until persuaded by Ernest Hemingway to compose an account of the entire Zulu War of 1879, as none had ever been published in the United States.

The mention of Hemingway, alerted me that Morris might be an interesting person in his own right.  I originally read the book in the mid-1970s on the recommendation of an acquaintance who had been enthralled by it.  At that time, there was very little information available on the author.  More recently I've read the 1998 edition (the book has gone through several printings over the years), as well as Morris' 2002 obituary and found that, indeed, he was quite an interesting character.

Educated at the Horace Mann School for Boys in New York City, he entered the navy in 1942 and then went on to the Naval Academy, graduating in 1948, remaining on active service until 1956, and retiring as a Lieutenant Commander.  It turns out that his assignment as a naval officer in Berlin was a cover; from 1956 through 1972 he was a CIA officer in Soviet counterespionage, serving in Berlin, Paris, the Congo and Vietnam.  From 1972 through 1989 he was foreign affairs columnist for the Houston Post.  Morris spoke German, French, Afrikaans, Russian and Chinese, held a commercial pilot's license and was a certified flight instructor. 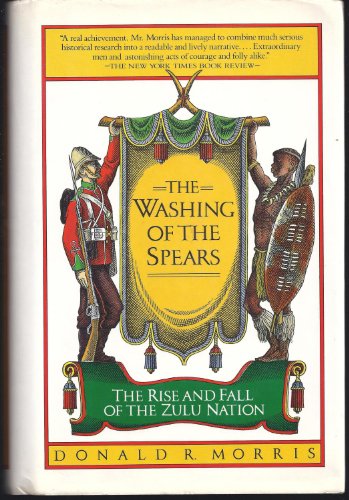 Once Morris took up Hemingway's suggestion and began research on the Zulu War, he realized he needed to find out more about its origins.  It was a process that ended up taking him all the way back to the early 17th century, when both the Dutch and the Bantus (of whom the Zulu were a subgroup) first entered the lands that later became the Republic of South Africa, the Dutch in the southwest via the Capetown settlement and the cattle-herding Bantus migrating from the north.  The result is a 603 page epic (excluding footnotes), encompassing almost 300 years of history, and all of it accomplished without visiting South Africa.

Morris tells us of the fate of the Bushmen and Hottentots, most of whom were destroyed, caught between the advancing Dutch settlers (who came to call themselves Boers) and Bantus.  We learn of the coming of the English in the late 18th century, which accelerated the migration of Boer farmers, north, northeast and east of Capetown in order to escape British control.  We learn of the emergence of the Zulu nation in the 1820s under Shaka, and of his brilliant in leadership, tactics and strategy as well as his erratic behavior and brutality.

(Zulu impi) The innovative military system he developed and the incredible endurance and bravery of the Zulu warriors, made Shaka's kingdom feared across the land, among both natives, Boer (who had also come to consider themselves natives) and English. Under Shaka and his successors, the Zulu controlled most of the coastal strip of southern Africa, eventually coming up against the Boers, who began their Great Trek in the 1830s to escape the encroaching English; a journey which took them to what was to become the Orange Free State, the Transvaal and Natal.

As the British consolidate their control we learn of the confinement of the Zulu Kingdom to a smaller area and then of the manipulations that led to the 1879 war.  It culminates in Morris' thrilling narrative of the events of January 1879.  First, at Isandlhwana, where a British and native force of 1,800 was overwhelmed by the Zulu impis (the equivalent of a division in a western army), resulting in the worst defeat Britain ever suffered in Africa at the hands of a native force.  Of 960 Europeans only 55 survived (every one of the 602 soldiers and officers of the British infantry perished), along with only 300 of the 850 native troops.  Then came Rorke's Drift, the mission station that had been converted into a supply station to support the British invasion of Zululand, where 140 soldiers (of whom more than 20 were incapacitated with sickness or wounds) faced 4,000 Zulus, who had crossed into Natal despite Zulu King Cetshwayo's order that they not enter British territory.  In fighting that was hand to hand at times, and went from 4 in the afternoon until after 2 the following morning, the Zulu were repulsed.  Seventeen of the British soldiers were killed, eight severely wounded and almost all of the remainder were injured in some manner.  Eleven Victoria Crosses, Britain's highest military honor, were awarded to participants. It was the most awarded to one regiment in a single action up to that time. Among the recipients was a cook, Private Henry Hook, who took up arms and enabled the evacuation of the patients from the mission hospital while he battled Zulu warriors from room to room as the building burned down around him. Morris takes us through the conclusion of the war in which the British regrouped and reinvaded, finally conquering the Zulu, and of the sad decline of Zululand over the next decades.

The book is a rousing narrative and highly informative.  My only criticism is that it does become bogged down at one point in the minutiae of the formation of the Natal Colony and the very confusing religious disputes among its European settlers.  About 50 pages could have been edited out.

The author treats the Zulu, as well as the Boers and British, fairly, portraying both admirable behaviors and the foibles of all parties.  Given the times it was written in, my guess is it would not meet with the full approval of today's social justice crowd, despite its evenhanded approach.

I've read a bit about more recent historiography of the Zulu and this general period in South African history to get a sense of how the book is regarded today.  In the decades since its publication much new information about the Zulu kingdom has become available that provides a more complete explanation of their thinking in the run up to the 1879 war and their strategy in conducting it.  Some different takes on the campaign and battles have also become available.  Nonetheless, the book remains highly regarded.

The 1988 edition of the book contains an unusual introduction from Mangosuthu Buthelezi, Chief Minister of kwaZulu, and descendant of King Shaka.  In it, Buthelezi gives tribute to Morris' efforts,  placing it in the context of its time:


Forced to use the only sources available in the vast amount of research he undertook in order to write the book, he nevertheless could not entirely escape the clutches of a very biased recording of the past.  It is, however, not the extent to which some of his observations could be questioned that is important, for at the time of its publication in 1966, The Washing of the Spears was the least biased of all accounts ever published about kwaZulu.

He traces the process of colonial domination over the Zulu people and step by step shows how the British occupation of Natal led to the formation of what the world now knows as an apartheid society. He writes with indignant awareness of how today's apartheid society was made possible by brutal conquest and subjugation during British colonial times, and he had attributed historically important roles to the Zulu kings in his awareness of the Black man's struggle against oppression.

He undertook a mammoth task and acquitted himself brilliantly.  The Zulu people owe a debt of gratitude to Donald Morris.  He saw the world through our eyes and he was at his brilliant best in writing about the major White actors who shaped events in South Africa during the nineteenth century.  He stands with us as we revere the memory of people such as Bishop Colenso; he stands with us in the knowledge of what Sir Bartle Frere did; and he stands with us in an intense awareness of how people like Sir Theophilus Shepstone turned traitor to the people who had befriended him and about whom he talked as his friends.

Of course no account of the Zulu War, or at least no account at THC, would be complete without mention of the 1964 film Zulu, about the fight at Rorke's Drift.  Starring as the two young officers in charge of the defense were Stanley Baker as Lt. John Chard and newcomer Michael Caine as Lt Gonville Bromhead.  King Cetshwayo was played by his great-grandson Chief Buthelezi!  I quite enjoyed the movie as a teenager.  Here's a nice piece on the film from an historical perspective.
Posted by Mark Stoler at 7:30 AM