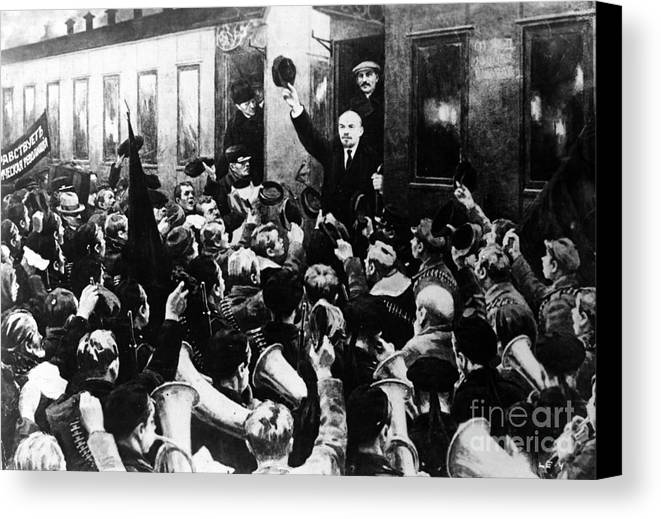 (Lenin arrives at the Finland Station)

‘It was with a sense of awe that they turned upon Russia the most grisly of all weapons. They transported Lenin in a sealed truck like a plague bacillus from Switzerland to Russia.’

It is one of those moments on which history turns.  Tens of millions would die as a result in Russia, eastern Europe, China and elsewhere.  Hundreds of millions would be oppressed.  It is ironic that although Marxist theory is predicated on iron rules of history in which individuals are of little import, that development in Russia and for the rest of the world during the 20th century, would have taken a very different direction if the German government had not taken the decision to inject Vladimir Lenin into Russia.  It was one of two catastrophic decisions made by Germany in April 1917 (the other being declaring unrestricted submarine warfare leading to America's declaration of war), the consequences of which led to its defeat in two world wars (see April 1945: Germany's End), and unlike the submarine decision, it was also a disaster for humanity.

Lenin's return and the Russian provisional government's reaction raises a fundamental question.  Under what circumstances should a democratic government resort to non-democratic means?  Without the presence of Lenin, it is very unlikely the Bolshevik Party would have seized power later in 1917.  As the historian Edward Crankshaw wrote in the October 1954 edition of The Atlantic:

Should the Kerensky government have arranged the killing of Lenin (and perhaps of Leon Trotsky), saving millions of lives?  The provisional government knew Lenin was plotting its overthrow, yet shied away from extreme measures.  So much depended on one man and his unshakeable will.

Anxiously watched events in Russia from his decade long Swiss exile during the early months of 1917, Lenin feared his moment might pass.  In February a revolution had overthrown the Czar and a provisional government was in place under Alexander Kerensky.  In today's political taxonomy the new government would be considered of the left, dominated by democratic socialists.  Lenin's party, the Bolsheviks, was explicitly not democratic, but was small, weak and leaderless, a relative nonentity.  Its leader was frustrated, separated from the events he had dreamt of by Russia's enemy Germany, with no way to reach his homeland in the midst of the fourth year of the great European war.

By 1917 each of the countries in the Great War was like a punch drunk boxer.  Exhausted but blindly staggering on, refusing to be knocked out.  With the war in stalemate, Germany was under great pressure.  The military High Command, with the approval of the Kaiser, was willing to role the dice in the case of both America and Russia, in a final attempt to win the war.  They needed Russia out of the war, allowing them to move millions of soldiers to the west to defeat Britain and France. They sensed the war weariness of the Russian people, the revolutionary chaos and the weakness of Kerensky's government.

At Zurich on April 8,  Lenin and his entourage entered the train provided by Germany.  Across Germany, then across the Baltic and through Sweden, entering Russia via Finland, which was then a part of Russia, and arriving at the Finland Station in Petrograd (St Petersburg) on April 16.   Lenin's objective was already set - overthrow of the provisional government and establishment of a Bolshevik dictatorship.   He smashed any thought of compromise within the Bolshevik ranks.  One observer summed up a speech Lenin gave two days after his arrival:

He was unswerving.  After a failed coup attempt in July, the Bolsheviks regrouped and succeeded in overthrowing the provisional government in October.  With armed soldiers they forcibly disbanded the first fully elected parliament in Russian history.  They triumphed in the Civil War that followed, with Lenin instituting the Red Terror, mass executions to instill terror in the populace.  As his Justice Minister explained, "Execution of the guilty is not enough, execution of the innocent will impress the masses even more".  As we now know from Solzhenitsyn and others, it was Lenin who created mass terror and the Gulag as Soviet institutions; Stalin merely expanded and perfected his predecessor's work.  Lenin's example was followed by every communist regime of the 20th century and was carefully observed as a model by the growing Nazi Party in Germany.

Would you have ordered a bullet for Lenin?