THC came across another memento of our 1978 trip to Greece (see The Magic Bus for the prior instance); this photo by the future Ms THC: 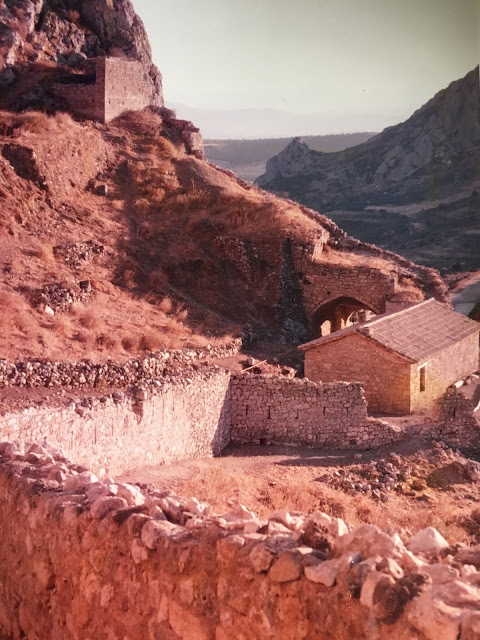 (Acrocorinth by Ms THC)
We'd arrived in the port of Patras that morning on the overnight ferry from Italy (we'd slept on deck as we could not afford a cabin), and then caught a train to Corinth.  For some reason we cannot remember we decided to visit the Acrocorinth, taking a cab up to the gates and then walking further up the hill and around the ruins.  We also saw the view you can see in the photo below.

(Corinth and Gulf of Corinth from Acrocorinth)

The Acrocorinth is an acropolis built on a ]isolated mountain rising nearly 2,000 feet above the plain of Corinth.  Positioned near the entrance to the Peloponnese it provides an ideal defensive site. 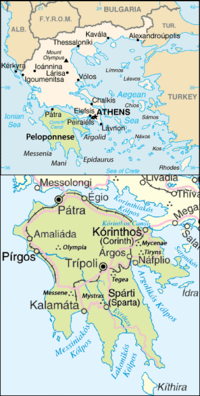 The first fortifications were built on the site around 600 BC, and over the years was occupied by Greeks, Romans, Byzantines, Franks, Venetians, Ottomans and then again, after 1822, by Greeks.   It is the largest castle in Greece and one of the largest in Europe with its perimeter walls covering about two miles.

The most dramatic event in its history was a siege which lasted from 1205 to 1210.  In 1204, the Fourth Crusade, under Venetian and Frankish leadership, ended up seizing Constantinople and dispossessing the Byzantine emperors, instead of going to the Holy Land.  In the ensuing chaos, the local area governor, Leo Sgouros, occupied the Acrocorinth, which was then besieged by the Crusaders.  The castle fell in 1210.  Sgouros committed suicide by jumping from one of the cliffs.
Posted by Mark Stoler at 7:30 PM