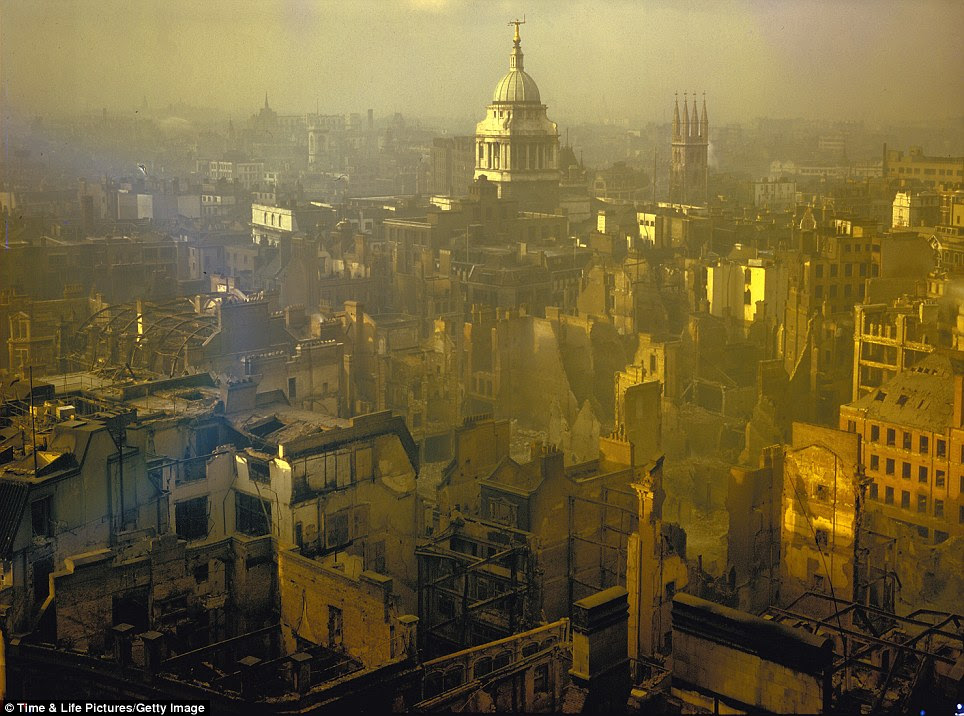 On September 7, 1940 the German Air Force launched what became known as The Blitz with a daylight raid on London consisting of 348 bombers and 617 fighter aircraft.  The Blitz lasted until May 16, 1941.  During that time more than 100 major city raids were conducted with London targeted 71 times (including 57 nights in a row at one point), Birmingham, Liverpool and Plymouth hit eight times each and twelve other cities also being struck.  More than 40,000 British civilians were killed and more than 1 million homes destroyed. The change in German strategy that led to The Blitz, although horribly destructive in its results, may actually have saved Britain.


In two previous posts on the events of 1940, Churchill Ascends and Managing The Boss, we covered how Churchill became Prime Minister and the challenges his management style posed to his colleagues and staff.

In the crisis of 1940, Churchillian rhetoric, with its fondness for apocalyptic imagery, finally found, in Adolf Hitler, a foe worthy of its power.  The close of his June 18, 1940 speech to the House of Commons remains one of the most magnificent passages in the history of the English language:

What General Weygand called the Battle of France is over,  I expect that the Battle of Britain is about to begin.  Upon this battle depends the survival of Christian civilization.  Upon it depends our own British life, and the long continuity of our institutions and our Empire.  The whole fury and might of the enemy must very soon be turned on us.  Hitler knows that he will have to break us in this island or lose the war.  If we can stand up to him, all Europe may be free and the life of the world may move forward to broad, sunlit uplands.  But if we fail, then the whole world, including the United States, including all that we have known and cared for, will sink into the abyss of a new Dark Age made more sinister, and perhaps more protracted, by the lights of perverted science.  Let us therefore brace ourselves to our duties and so bear ourselves that, if the British Empire and its Commonwealth last for a thousand years, men will still say 'This was their finest hour'.

Four hours after the Commons speech, Churchill recorded a version for wider distribution.  You can listen to it here:

The Battle of Britain was the first battle ever fought solely by air forces.  The first phase, from July 10 to August 11 consisted of German attacks on British shipping and ports.  The second phase, from August 12 to September 6, was a direct assault on British fighters and air fields.  It was during this phase, on August 20, that Churchill gave another of his landmark speeches, saluting the brave pilots of the Royal Air Force (RAF), in language echoing Shakespeare's lines from Elizabethan times "we few, we happy few, we band of brothers" (see Tell The Dauphin):

"Never in the field of human conflict has so much been owed, by so many, to so few"


The Blitz was the third phase of the battle. Seven decades later there is still controversy over what Hitler's ultimate intentions were regarding Britain.  Did he ever really intend to launch an invasion under the right conditions?  There are many indications he was willing to negotiate a peace agreement (see Churchill Ascends for Mussolini's mediation offer in May) under his terms  - neutralization of the British fleet and a British government that, if not an ally, would at least be strictly neutral and indifferent to whatever the Germans planned for the European continent.

The difficulties of undertaking an invasion were also formidable.  The Nazis needed to have air and naval dominance over the English Channel and to have adequate transport to move sufficient troops and equipment, a task that even a better equipped American, British and Canadian force found difficult four years later.

There is also now considerable evidence that Hitler's decision in the late summer of 1940 to invade the Soviet Union in 1941 was driven by his conviction that the only reason the British refused to come to terms was their hope that the Soviet Union would eventually come into conflict with Germany.  Hitler intended to quickly defeat the Communist regime, depriving the British of all hope, leading to a peace agreement and an end to the war. None of this was known at the time to the British government.  They had to plan for a possible invasion.  With France gone, Britain stood alone.  All of continental Europe was either under German occupation, allied with Germany (Soviet Union, Hungary, Romania, Italy) or in the German sphere of influence (Spain, Yugoslavia, Finland).  The U.S. remained resolutely neutral despite FDR's pro-British sympathies.

The airfield attacks of the second phase of the Battle of Britain had a considerable impact on the functioning of the British Air Force (how considerable is still a subject of debate) and continuing the attacks provided the only potential avenue for achieving the domination of airspace required as a prerequisite to invasion.

But the Germans ran out of patience and convinced themselves that switching to the bombing of cities with the goal of terrorizing and demoralizing the populace might be a quicker route to a peace agreement as well as providing them with revenge for the initial RAF strikes on German cities in late August and early September.  What a misjudgement of the British

(Sheltering in the subway) temperament.   British resistance and morale strengthened as The Blitz continued.  Or, as Churchill later put it in mocking response to Hitler's boast that he would wring Britain's neck like a chicken - "some chicken, some neck!".

The Blitz also strengthened American sympathy for the British which was in accord with Churchill's long-term strategy which saw victory only possible with America in the war as an ally.  The British government produced a documentary on the Blitz, "London Can Take It", narrated by American journalist Quentin Reynolds, and widely distributed in the U.S.

The reports of U.S. correspondents based in London contributed to the increase in sympathy in America.  The most prominent was Edward R Murrow of CBS News.  This is Morrow broadcasting from the rooftop of a building in London during a night raid in the fall of 1940.

As described above, the German attacks caused great loss of life and property.  But along with providing the RAF with a much needed respite from the airfield attacks, three other German air force deficiencies limited the impact of the city raids.  First, prior to the war, the Germans decided to place an emphasis on the production of two-engine bombers. These bombers had much less bomb-carrying capacity than the four engine bombers unleashed later in the war by the British and Americans in their aerial attacks on Germany.  Second, the production of even these small bombers remained at a relatively low level, again in contrast to the British and Americans who, by 1944, could launch 1000 (larger-capacity) bomber raids on Germany.  Finally, the German ability to adequately locate targets, particularly at night was very limited, so very little of strategic value was lost by the British during The Blitz.

The Blitz ended in May 1941 as the German air force moved its planes to the east to prepare for the June 1941 surprise attack on the Soviet Union.

Over the next three years, the pace of the Allied air assault on Germany increased and by the summer of 1944 it dwarfed in scope and destructive power the German attacks during the The Blitz.

But in June 1944, destruction from the air returned to London and Britain.  On June 13, the first V-1 Flying Bomb (or Buzzbomb) was launched at London and then in September came the V-2, a supersonic rocket bomb.  By the time this wave of attacks ended in early April 1945 another 33,000 British civilians were killed or wounded.  The resilience that had served Londoners well in 1940 had been worn down by four more years of war, personal loss and deprivation and these attacks had a bigger impact on lowering morale even though overall victory in the war was near.  The V-2 in particular was unnerving. Since it flew faster than the speed of sound there was no warning noise or sirens and you only knew an attack was underway when the explosion occurred. But the spirit of London held when it counted the most, in 1940-1 when they stood alone and victory was not inevitable.