Smoky Joe Versus The Big Train

In May, this blog featured Ty Cobb going into the stands to beat up a fan in a game that took place in the 1912 season in the post Take Me Out Of The Ballgame.

Continuing the story of the 1912 season, one hundred years ago today the most publicized game of the regular baseball season was played at Fenway Park.  It was a staged pitching duel between of the Boston Red Sox.

The American league pennant race was over by that time.  The Red Sox held a 13.5 game lead over the second place Philadelphia A's and a 14 game lead over the Senators.  But earlier in the season, Johnson set an new American League record by winning 16 games in a row, a streak that had only ended with a relief loss on August 26.  Now, Smoky Joe had won 13 straight, threatening Johnson's brand-new record.  Public interest in both of the pitchers was enormous and the ball clubs saw the opportunity for a huge gate and lots of publicity.  Even before the start of the 1912 season, Johnson was acknowledged to be the best young pitcher in the American League and now, with his streak, Smoky Joe was challenging The Big Train for that title.  The Senators were coming into Boston to play the Red Sox and Walter Johnson was scheduled to pitch in his normal rotation on September 6, but Smoky Joe was not due to start until September 7.  Nonetheless, in order to set up the match, the Red Sox agreed to move Joe's start up and pitch him on three days rest.

(Wood & Johnson before the game)

Fenway Park had just opened in April of 1912 but the Red Sox had been in operation since 1901.  The crowd of more than 29,000 was the second-largest in Sox history (average attendance at Fenway that year was 7,655).  The Boston Globe reported of the crowd:

It packed the stands and the bleachers, and trooped all over the outfield inside the stand and bleacher boundaries. In the grandstand the broad promenade was packed solid ten rows deep with fans on tip-toes to see what was going on. The playing field was surrounded completely by a triple, even quadruple, rank of humanity, at least 3,000 assembling on the banking in left field, and the mass of enthusiasts extending around in front of the huge concrete stand.

This photo of Joe Wood warming up before the game gives a sense of the crowd that day:

It turned out to be one of those rare highly anticipated pitching duels that meet expectations.  For the first five innings neither team could score.  The Globe reported:

Both pitchers seemed to have their best at their command. Both had speed, control and, withal, a fighting spirit that spread itself over the entire battlefield. Neither team made even a semblance of an error, a little short passed ball contributed by catcher Cady of Boston being the only slipup of the day.

Then, with the Sox batting in the bottom of the 6th with two out, future Hall Of Famer Tris Speaker (a lefty hitter) hit an opposite field double to left.  The next batter was Duffy Lewis. The Senator outfielders shifted  anticipating Lewis, a right-handed pull hitter, would hit to left.  Why were they playing Lewis to pull, when Johnson was so fast and Speaker couldn't pull him?  I've not seen any explanation.  Sure enough, according to the Globe, Johnson's pitch was so fast that Duffy:

could not get his bat around far enough to hit to his accustomed field. Instead, the ball shot off to right field, and with not much fire on it.

The Globe reports what happened next (Moeller is the Senator right fielder and Gandil* was the first baseman):

The ball sped away over Gandil’s head, and then began to drop toward the foul line. Moeller, who had been almost over in center field, was off with the crack of the bat. The ball was almost black, and many in the crowd could not see it, but they did see Moeller legging it toward the foul line for all he was worth. Faster and faster he came, and nearer and nearer the ball came to earth. Finally, with one frantic plunge, Moeller dove after the ball. For an instant it seemed that he had caught it, but the ball just touched his finger tips and dropped onto the sod. Speaker was almost across the plate when Moeller got to the ball, for there were two out and “Spoke” had started the instant the ball was hit.

It was to be the only run of the game.  In the top of the ninth, Wood struck out the last two Senators and walked away a 1-0 winner for his 30th victory of the season.  Wood gave up six hits, walked three and struck out nine.  Johnson gave up five hits, walked one and fanned five.  The game took only 1:46 (it's now mandatory that every Fenway game take at least 3 hours!). 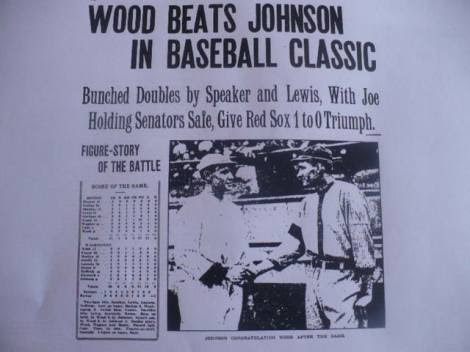 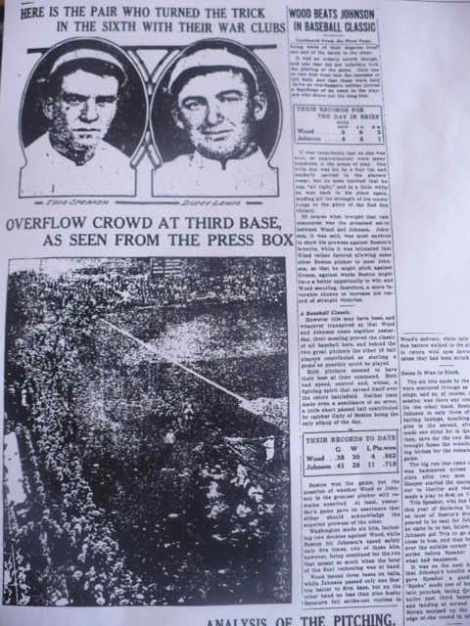 Smoky Joe Wood won his next two starts to tie Johnson's record of 16 consecutive wins before finally losing on Sept. 20 to the Detroit Tigers.

By the end of the season, Walter Johnson had won 33 games (losing 12), while Smoky Joe won 34, losing only five.  Wood went on to win another three games in the 1912 World Series.

After 1912, the careers of the two pitchers went in opposite directions.  In 1913, Walter Johnson had one of the most dominating pitching performances in major league history winning 36 games and leading the majors in every statistical category for pitchers.  He went on to have 8 more 20+ win seasons, pitching until 1927, winning 417 games overall (second only to Cy Young) and throwing a record 110 shutouts.  He was one of the first five players elected to the baseball Hall of Fame in 1936.

In the spring of 1913, Joe Wood slipped fielding a ball in a game against the Detroit Tigers and broke either his thumb or a small bone in his wrist (it's not reported consistently in the sources).  Rushing back from the injury too soon he altered his throwing motion and hurt his shoulder, losing the speed on his fastball.  For the rest of his abbreviated career he pitched in severe pain (both hand and shoulder), unable to raise his arm for several days after each time he pitched.  With his starts limited he could still be relatively effective when he pitched, winning 36 games and losing only 13 over the next three seasons, but he could not pitch without extensive rest between each start and the pain continued to worsen.

Joe sat out the 1916 season and then joined his former Red Sox teammate, Tris Speaker, with the Cleveland Indians as a part-time outfielder, not as a pitcher.  Joe turned out to be a relatively effective player hitting as high as .366 in 1921 before retiring after the 1922 season.


The enduring threads of the game of baseball continue through the years and we pick up Joe Wood's story sixty years later as recounted in the well known baseball writer Roger Angell's 1982 book, Late Innings.  Roger writes about watching a ballgame on May 21, 1981 at Yale Field in New Haven.  Yale and St. John's were facing off in the NCAA Northeast Regional Tournament to determine who would go on to the College World Series in Omaha, Nebraska.  Roger Angell attended the game with the 91 year old Joe Wood.  After leaving major league baseball Joe Wood became the baseball coach at Yale, a job he held from 1923 to 1942 and he remained a resident of the New Haven area.

When Angell arrived at Joe's house he tells how he walked up to shake Wood's hand:

That day, Roger and Joe watched one of the most famous pitching duels in collegiate history.  The pitchers were Ron Darling (Yale) and Frank Viola (St Johns), both of whom went on to very successful major league careers (Darling is on of the broadcasters for Mets games today). (Yale Field)  For eleven innings Darling no-hit St Johns, but while Yale got several hits they couldn't score against Viola.  In the 12th, Darling gave up a soft liner over the shortstop for the first base hit.  The runner stole second and third and then with runners on at the corners, St John's worked a delayed steal of home and won the game 1-0.

During the game, Angell and Wood spoke of his career, the 1912 duel with Johnson and about contemporary baseball.  Back in 1912, fans and writers argued over whether Johnson or Wood was faster at their peak.  There is a famous quote from Johnson claiming that no one was faster than Smoky Joe Wood.  I always took that with a grain of salt as Walter Johnson was an exceedingly modest man.  Wood told Roger Angell that Walter was faster:

"Walter Johnson was a great sort of pitcher, with hands that came clear down to his knee.  Why, the way he threw the ball, the only reason anybody ever got even a foul off of him was because everybody in the league knew he'd never come inside to a batter."

Here's some rare footage of Johnson throwing.  As you can see, he's got a very long arms, a sidearm motion and he slings the ball.  He may have been faster relative to other pitchers of his time but it's difficult to see how he could have been throwing in the high 90s with that motion.

* "Chick" Gandil was the Senators first baseman in 1912.  Today, Gandil, a mediocre player, is better known as the ringleader of the corrupt Chicago "Black Sox" who threw the 1919 World Series.
Posted by Mark Stoler at 4:30 AM