Shall Be Then, Thenceforward, And Forever Free 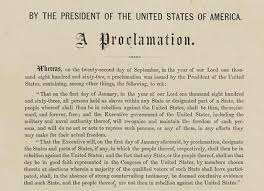 With these words one hundred and fifty years ago today, President Lincoln issued the preliminary Emancipation Proclamation.  Although the Proclamation, when it became effective on January 1, 1863, only freed slaves in Confederate occupied territory (an action which could not be effective since by definition the Union army did not occupy that territory), it was the first step on the tortured path towards ending slavery.  Despite the Proclamation and the passage, within a few years, of the 13th, 14th and 15th Amendments to the Constitution it was to be another century before the promise of full freedom and equal rights for the former slaves and their descendants was to be redeemed.

The issuance of the Proclamation transformed the Civil War.  In May of 1862 it looked like the end might come soon for the Confederacy.  The Union had captured the largest port in the South, New Orleans, closing the outlet of the Mississippi River. In the key western theatre of Tennessee, Union forces captured Forts Henry and Donelson, repulsed the Confederate army at Shiloh, occupied Nashville and Memphis and were poised to advance into Mississippi and Alabama.  Most importantly, in the East, in a daring move, Gen McClellan had transported the Army of the Potomac to the Yorktown peninsula and advanced to the gates of Richmond.  If the war had ended in May or June it would have done so with the Confederate states rejoining the Union and slavery left intact.

What happened between May and September?  In the West, the Union armies became bogged down and failed to advance and then in late summer Confederate forces charged out of eastern Tennessee invading Kentucky, capturing its capital (Frankfort) and almost reaching the Ohio River and the outskirts of Cincinnati.

In the East, Robert E Lee took over the command of the Army of Northern Virgina and in late June launched a series of attacks which drove Gen McClellan back from Richmond and left his forces bottled up.  Then, in an audacious move, Lee rapidly marched his army into northern Virginia and in late August shattered a Union army under Gen Pope at the Battle of Second Manassas, only 35 miles from Washington.  Within a few days Lee crossed the Potomac River and invaded Maryland.

At the same time, Britain and France, both of which would have been happy to see a new nation emerge to rival the United States, began to hint about possible recognition of the Confederacy and offering to mediate a peace between the two nations.

The President needed to do something to change the game and the Confederate momentum.  He was dependent upon the Union armies for the latter but the decision to issue the Proclamation and its timing was something he could control.  In July he circulated a draft to his Cabinet which was not enthusiastic.  But from Lincoln's perspective the Proclamation had the potential to do accomplish dual goals.  By issuing a preliminary Proclamation, with a delayed effective date, he gave Southerners a lot to think about because he was placing its main economic asset (slaves) at risk, a risk they could only mitigate by rejoining the Union before the effective date or by Southern victory.  It also served as a potential deterrent from foreign intervention since it would make it more difficult for Britain and France to support the Confederacy if ending slavery became a clear war goal for the North.

Lincoln was also Constitutionally constrained in the actions he could take regarding slavery.  As President he had no authority to alter the status of slavery as a Constitutional matter other than in his role as Commander in Chief, but in that role he was powerless regarding slavery in the four slave states that had not seceded.  Thus, the Emancipation was limited to those portions of the Confederate states not occupied by Union forces as of January 1, 1863.

Despite the reluctance of his Cabinet, the President insisted he would issue the Proclamation once the Union army had sufficient success in the field.  The Battle of Antietam on September 17 gave Lincoln enough of a victory to allow him to fulfill his promise five days later (see also Larry And Mark's Excellent Adventure).

Tomorrow:  What Was The Civil War About?
Posted by Mark Stoler at 4:00 AM