Diocletian Has A Very Good Day


THC almost let the 1,730th anniversary of the accession of Diocletian as emperor of the Roman Empire on November 20, 284AD pass by without notice!  Twenty one years later he became the only Roman Emperor to voluntarily retire, an extraordinary accomplishment particularly in light of the violence of the prior fifty years.

Diocletian, born Diocles in present-day Croatia and of non-imperial, non-noble family origin, was a product of the turmoil of the third century AD.  About 40 years old in 284, he first comes to notice only a couple of years before as commander of the elite cavalry unit under Emperor Carus (282-3).  In 283 Carus embarked on a successful campaign against the Parthians in Mesopotamia and also named Diocletian to the prestigious, though largely ceremonial, office of Counsel.  When Carus mysteriously died in late 283 at the climax of the campaign the empire passed to his sons, Carinus who was in Gaul, and Numerian with the army in Mesopotamia.

Numerian made his return to the Empire very slowly and by November 284 had only reached Asia Minor (current day Turkey) when the Emperor's Prefect (and father in law) Arrius Aper announced to the legions that Numerian had died of illness.

At the army council called to chose a new emperor, Aper tried to garner support but Diocletian was selected.  During his investment ceremony on November 20 the new emperor sealed the deal by accusing Aper of murdering Numerian and then drawing his sword and stabbing the Prefect to death in front of the assembled troops.  Quite a first day.

The following year, Diocletian fought the forces of Carinus somewhere in modern-day Serbia.  Carinus was defeated and killed leaving Diocletian as the sole ruler of the Empire.

We don't know much about his background or appearance but to have commanded the respect of the legions Diocletian must have been physically impressive, demonstrated personal bravery and leadership and instilled an appropriate measure of fear in those around him. 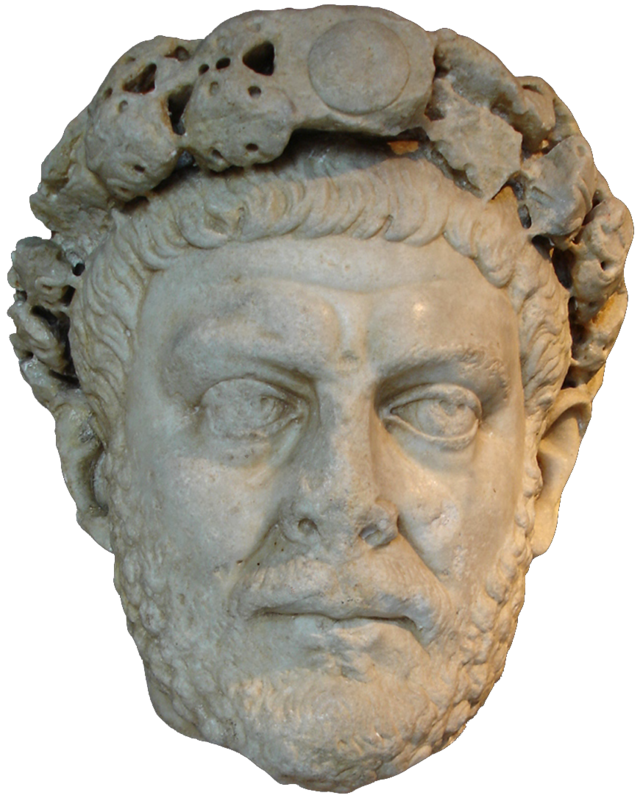 (Diocletian; would you mess with this dude?  From Wikipedia)

Diocletian's reign was one of the most significant in the history of the Empire.


The Return To Stability

Diocletian brought to an end the chaos of the period from 235-284  known today as the Third Century Crisis ,which saw the empire's borders collapse under assault from barbarians crossing the Rhine, Danube and Black Sea and by successful attacks from the new Sassanian dynasty of Persia (including the sack of Dura Europos).  Under this pressure Rome abandoned the Agri Decumates area east of the Rhine (southwestern Germany) and the province of Dacia (modern-day Romania) north of the Danube.  The period also saw emperor after emperor acclaimed, overthrown and then murdered.  There were 19 "legitimate" emperors during that half century and at least that number of challengers to the throne.  At the peak of the disruption during the late 260s and early 270s the Empire shattered  into three parts with the West (Britain, Gaul and Spain) having its own Roman Emperor and the East (Asia Minor, Syria and Egypt) ruled by a dynasty from the desert oasis of Palmyra of which the last ruler was Queen Zenobia and the center controlled by the besieged Emperor Gallienus. 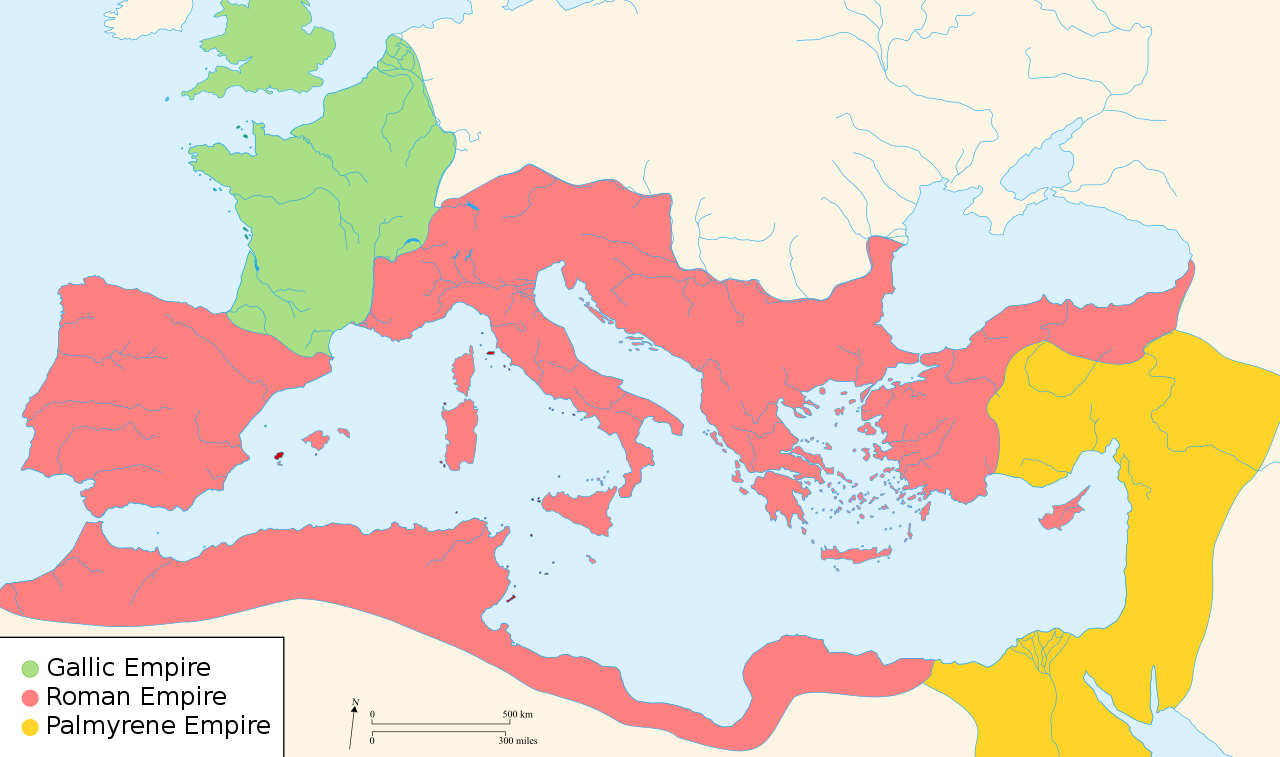 (From Wikipedia)
Reunion came in the reign of Emperor Aurelian (270-5), who subdued the Gallic and Palmyrene empires and was then promptly assassinated plunging Rome back into several more years of strife.  When Diocletian came to the throne he found a reunited Empire but one much damaged by barbarian invasions and civil strife along with a debased currency and raging inflation.

A year after he became sole ruler he took an unprecedented step in an attempt to cure the fatal flaw of the empire; it's failure to have clear rules of dynastic succession which led to unending cycles of plotting, murder and civil war.  Diocletian named a fellow general, Maximian as co-Augustus to rule jointly with him.  Maximian would be based in Milan and rule the Western part of the empire while Diocletian would reside in Nicomedia and govern the East.  The two worked in close cooperation for several years before taking the next step.  In 293 two younger men were named as Caesars with the intent that they eventually succeed the two Augustus.  Galerius worked under the tutelage of Diocletian while Constantius was under Maximian but both of them had direct control of provinces and legions, an arrangement known as The Tetrachy.

Diocletian also embarked on a major reform of the army dividing it into mobile and stationary forces and increasing its size substantially to meet the threats from the barbarians and Sassinids.  This in turn required major increases in taxation which in turn led to a large increase in the imperial bureaucracy.

The new Emperor ruled as a distant autocrat in a much more centralized Roman state.  A new imperial regalia was instituted and access to the Emperor became much more restricted.  The currency was restored but Diocletian's attempt to impose price controls was a failure (a failure repeated again many times over the centuries). 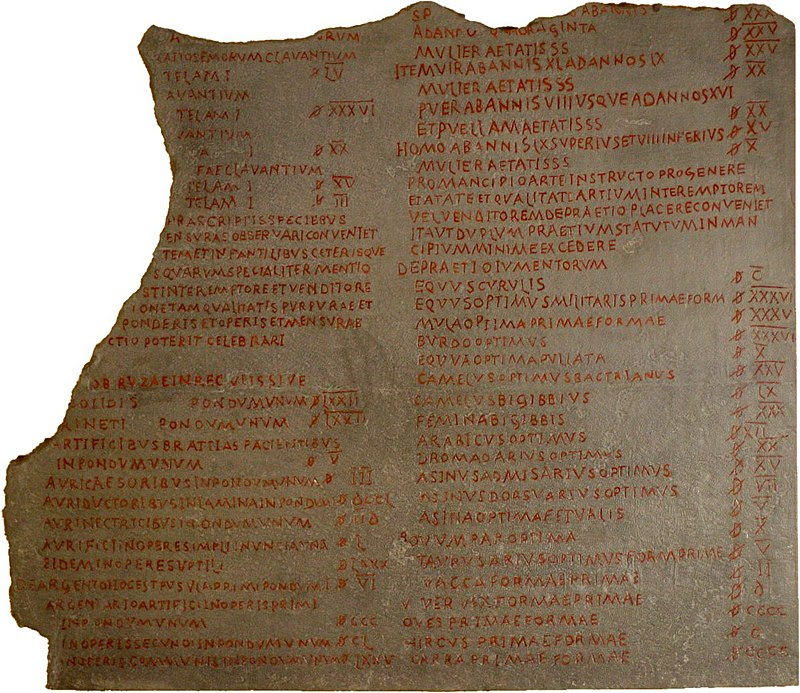 This stability was purchased at a heavy cost.  Restrictions were placed on mobility in trades and professions with male children having to follow the same trade as their fathers and peasants were tied directly through the land for generations.

Militarily Diocletian and his associates subdued the barbarians and waged a successful war against the Sassinids bringing about a temporary peace across the empire.

After recovering from a severe illness, Diocletian decided to abdicate his throne which he did on May 1, 305 as did Maximian (though in his case it apparently took much persuading from his co-ruler to make him agree).   Diocletian retired to Spalatum, a town on the Adriatic Coast of his native Dalmatia where he had an enormous palace built for him on the model of a Roman legionary fortress.  Over the centuries the palace became the core of the popular tourist destination known today as Split, Croatia.  Below is an artist's rendition of Diocletian's palace and an aerial photo of Split today in which you can clearly see the outline of the palace.  The picture at the top of the post shows one of the palace's inner courtyards as it still exists today.

Diocletian remained quietly in retirement, raising cabbages until his death in 311. 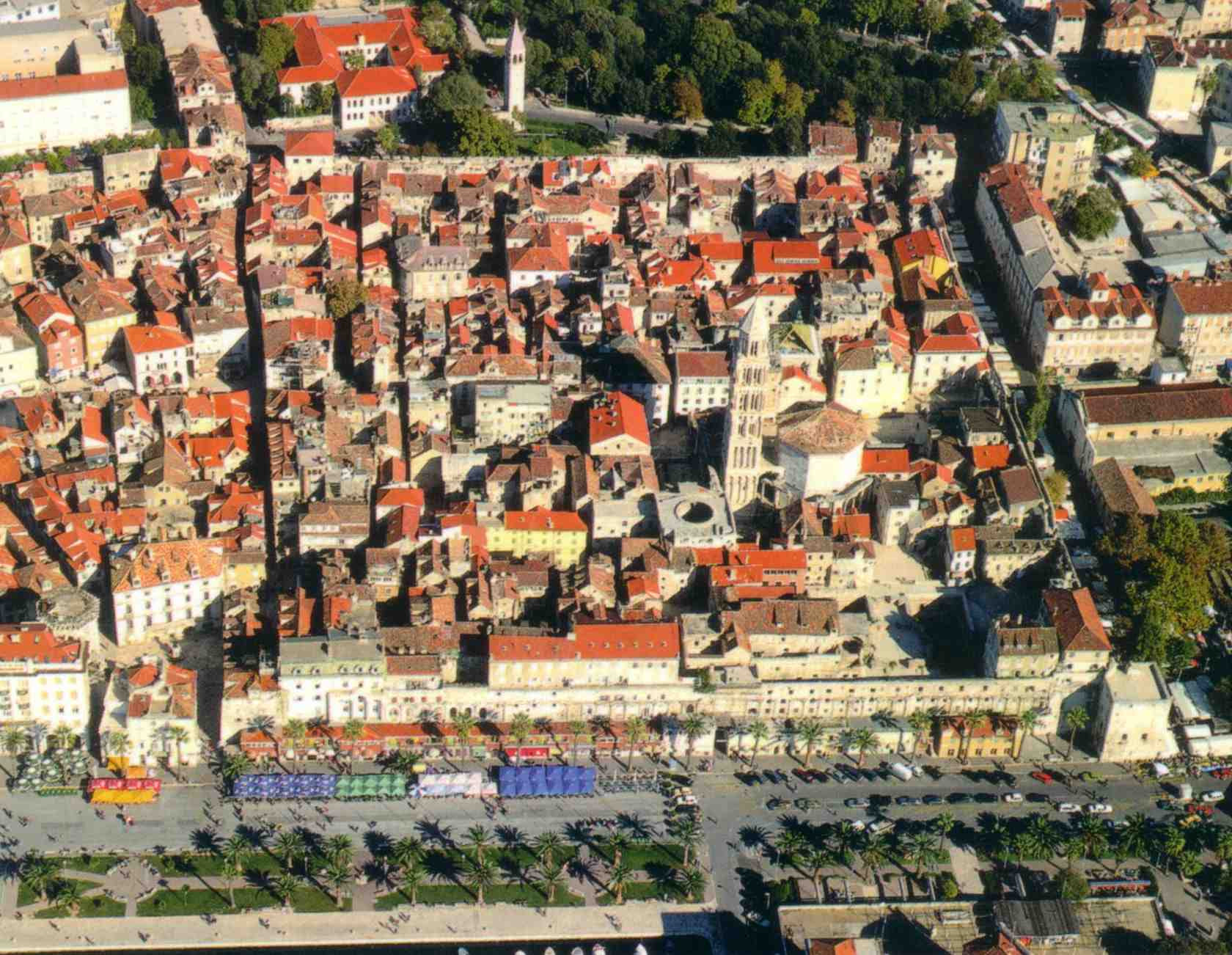 Diocletian's Tetrachy did not survive his retirement.  Conflict broke out between various claimants to the throne and a series of civil wars broke out which consumed the empire for the next eighteen years.  At one point, in 308 Diocletian was coaxed out of retirement to attend a peace conference near present-day Vienna, Austria at which a temporary truce was arranged but which soon collapsed.  In 324 Constantine became the sole ruler of the empire ending the wars - for a while.

However, while Diocletian could not solve the succession problem his other reforms did provide some longer term stability until the empire, particularly in the west, entered its final crisis at the beginning of the fifth century.