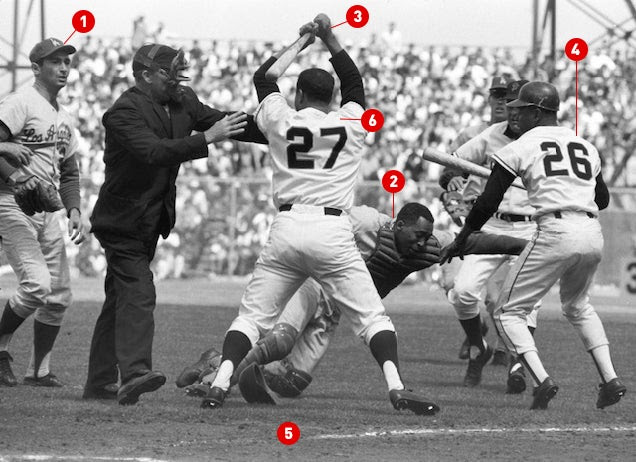 Today is the 50th anniversary of the most notorious fight in baseball history - notorious because a pitcher, one of the best in baseball at the time, swung a bat at the head of an opposing player.  Leonard Koppett, reporting on the game for the New York Times commented on the startling nature of the incident:


Both teams were left emotionally shaken. Fights that erupt under pennant pressure are not unusual, but they are always fist fights. Players, coaches and managers of both teams here could not recall ever seeing an attack with a bat.

It was the greatest of all baseball rivalries, the Giants versus the Dodgers, both transplanted to California from New York in 1958.

It was Sunday afternoon, August 22, 1965 in Candlestick Park, home of the Giants and the final contest of a four game series.  When the Dodgers arrived on August 19 for the start of the series both teams were in the midst of a heated pennant race.  The Milwaukee Braves led the Dodgers by a half game; the Dodgers in turn were a half game ahead of the Giants while the Cincinnati Reds and Philadelphia Phillies lingered a little behind (3 1/2 and 5 games respectively) ready to pounce if any of the teams above them weakened.

The Dodgers had won two of the first three games and entered Sunday a half game ahead of Milwaukee and 1 1/2 ahead of the Giants while the Reds had closed to only 2 1/2 out.  Both teams had their aces going for them, high kicking Juan Marichal for the Giants with a record of 19-9 and an ERA of 1.73 and Sandy Koufax for the LA team at 21-4 with an ERA of 2.10 (for more on this rivalry read Gibson Koufax Marichal Mashup).  42,807 fans jammed Candlestick to watch.

Marichal stepped to the plate to lead off the bottom of the inning.  Tensions were high.  With two outs in the top of the second, Marichal had thrown high and inside at Wills who dove to avoid being hit.  In retaliation, Koufax threw a ball well above the Giants lead off hitter in the third, Willie Mays.  Although Koufax had no problem throwing retaliatory pitches at a batter's lower body he would not throw at the head and deliberately made sure he didn't hit Mays.  In any event, the next escalation was triggered.  With two out in the 3rd, Ron Fairly who'd doubled off Marichal in the 1st came to the plate and Juan knocked him down with an inside pitch.  Home plate umpire Shag Crawford warned both teams that the next pitcher to throw at a batter would be ejected. 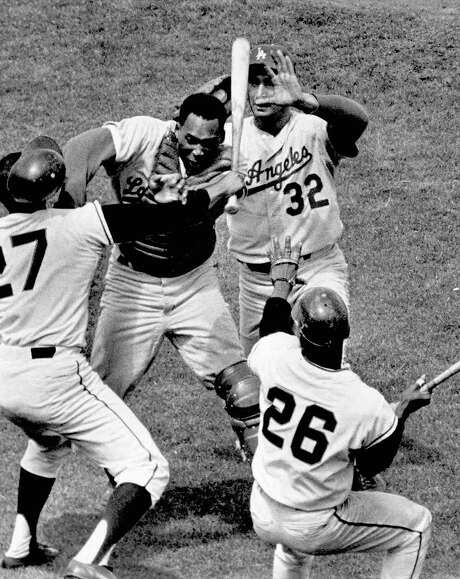 The tension went even further back than this game according to the most authoritative account of the fight, The Fight Of Their Lives by John Rosengren (2014).  During the late innings of Friday night's game the Giants thought the Maury Wills unfairly drew a catcher's interference call by stepping back and forcing catcher John Haller's glove to tip his bat.  When the Giants Matty Alou tried the same tactic unsuccessfully with Roseboro catching the Giants bench yelled at Roseboro leading to a angry shouting match between Roseboro and some players including Marichal.

Rosengren also cites contributing factors specific to Marichal and Roseboro.  At the time, Juan Marichal was one of the star young pitchers in the game having gone 25-8 and 21-8 the prior seasons but his behavior in recent weeks had been increasingly erratic with several blowups over umpire calls which the author attributes to concerns over the safety of his family who were caught up in the midst of a civil war which had erupted in the Dominican Republic in May 1965.  Many of Marichal's teammates later spoke of how worried he was that summer and Willie Mays said he wondered whether the pitcher should be playing at all.

The thirty-two year old Roseboro was not a star, but was a highly regarded defensive catcher, a four time All-Star over the course of his career, considered a leader of the Dodger team and known to be both strong and combative.  He was also a resident of South Central Los Angeles an area caught up in the Watts Riot that erupted on August 11, 1965, the first of many urban Northern city riots of the 1960s and which lasted until August 17 leaving thirty four dead and massive destruction in its wake.  On a couple of evenings, Roseboro sat in his home with a shotgun in order to protect it if rioters came.

Roseboro was determined not to let Marichal's throwing at his teammates go unavenged.  Marichal himself wondered if Koufax would knock him down but when Sandy threw his first pitch for a strike he relaxed.  The next pitch was a ball outside and that's when Roseboro took matters into his own hands.  As he later wrote in his autobiography:


"Koufax was constitutionally incapable of throwing at anyone's head, so I decided to take matters into my own hands."

Roseboro threw the ball back to Koufax as hard as he could whizzing it by Marichal's face and ticking his ear.  Marichal turned to Roseboro, words were exchanged and then Giants pitcher broke baseball's code - fighting is accepted, deliberately hitting anyone with a bat is beyond the pale of acceptable behavior, then and now.

For the blow by blow of the fight read this account by Rosengren.  Marichal hit Roseboro three times on the head but fortunately only opened a scalp wound.  The problem was the wound bled copiously and looked much worse than it was (it did reportedly take 14 stitches to close) and some players thought the catcher had lost an eye.  A furious Roseboro began lashing out at Marichal and anyone else in his path while Shag Crawford wrapped up Marichal to get him under control.  The rookie Tito Fuentes can be seen waving a bat but thankfully Giants catcher Tom Haller eventually dragged him away.

In this fragmentary footage you can see part of the first phase of the fight, though it does not show Marichal hitting Roseboro.  At one point you can see Haller grabbing Fuentes and his bat.
Willie Mays, who had not been involved in the brawl, made his way through the crowd reaching Roseboro, who was one of his best friends.  Mays worried that if Roseboro got to Marichal it would provoke the San Francisco fans to jump onto the field and join the fighting.  He grabbed Roseboro by his jersey and led him to the Dodgers dugout telling him "Johnny, stop it. Stop fighting. Your eye is out."  A photograph by Neil Leifer captured the moment.   You can see the blood flowing from Roseboro's head over his chest protector while Willie leads him away surrounded by Dodgers.

A crying Mays sat with Roseboro in the Dodgers dugout while he received medical attention and the players and crowd finally calmed down.  Players on both sides as well as the commissioner of baseball cited Mays's role in preventing worse violence with Dodgers manager Walter Alston saying "Mays was the only player on either club who showed any sense".

When order was restored and play resumed Bob Schroeder stepped to the plate to complete Marichal's at bat.  Though Koufax struck him out, Sandy seemed rattled.  The next batter, Fuentes, hit a fly out to deep left field and Koufax then walked Jim Davenport and Willie McCovey bringing Willie Mays to the plate.  Mays was in the midst of a record setting month for the National League in which he would eventually hit 17 homers.  He'd already hit a home run in each of the prior games of the Dodger series; two of them with the Giants trailing by a run and the third with the game tied.  He did it again taking Koufax out with a ball hit over the center field fence for the 491st home run of his career putting the Giants ahead 4-2.

After that Sandy settled down and over the next five innings allowed the Giants only one hit.  In the top of the 9th the Dodgers scored to make it 4-3 and had runners on first and second with only one out but failed to score leaving the series even at 2-2.  Even with the fight, the entire game took only 2 hours and eighteen minutes.

Marichal received what in today's game seems unbelievably light discipline being suspended for eight games (missing two starts) and fined $1,750.  Juan never regained his bearings winning only 3 of seven decisions in the remainder of the season and finishing at 22-13. Koufax took a while to steady himself; in his next three starts he lost twice and had a no-decision but then got back on track winning five of his last six decisions (along with two saves) to finish 26-8 and saving the best for last - in his last three starts the Dodgers only scored 10 runs but Sandy gained complete game victories in all three.  In 27 innings he yielded only eleven hits, eight walks and one run while striking out 38.

The Dodgers won the pennant by two games over the Giants and then went on to win the World Series against the Minnesota Twins with Koufax, on two days rest, pitching a shut out in the seventh game.

Juan Marichal would have more great seasons going 86-36 over the next four years and retiring in 1975 with 243 wins.  John Roseboro remained the regular catcher for the Dodgers until traded to the Minnesota Twins after the 1967 season where he played for two years before ending his career with the Washington Senators in 1970.

It was after their retirements that the next phase of their relationship began, recounted in a 2005 article by Gwen Knapp in SFGate.  For both of them the fight was something that fans would never let them forget.  Roseboro's widow recalled:


"People would come up to us at dinner and say 'Please tell us about the fight with Marichal,' "

At some point in the 1970s the two men met at an Old-Timers game, talked about the fight, shook hands and began a friendship that lasted until Roseboro's death in 2002.  Marichal became eligible for baseball's Hall of Fame in 1980 but was not elected in his first two years on the ballot, a failure attributed by many to voters still disapproving of his conduct in 1965.  John Roseboro decided to help out by making it clear that he forgave Marichal, acknowledging his own responsibility for triggering the fight and, at the invitation of Marichal, taking his family to the Dominican Republic and participating in Juan's charity golf tournament.  Marichal was elected to the Hall of Fame in 1983.

In 2002, Juan Marichal was an honorary pallbearer at Roseboro's funeral and spoke at the service, telling the congregation "I wish I could have had John Roseboro as my catcher."

Sandy Koufax speaking later to the congregation turned to Marichal to say, "You would have loved pitching to John Roseboro."  THC says Roseboro was a big man and not just in size. 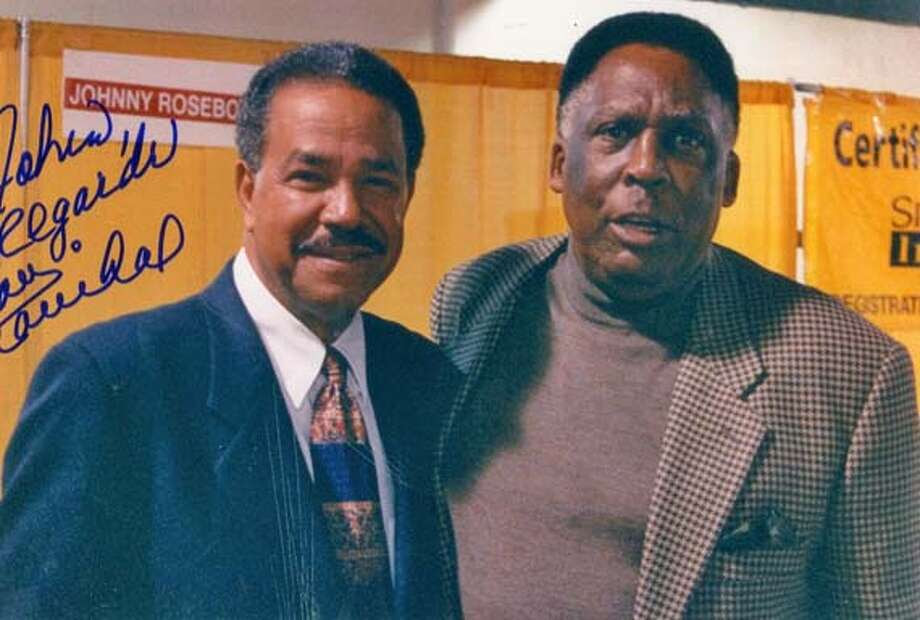