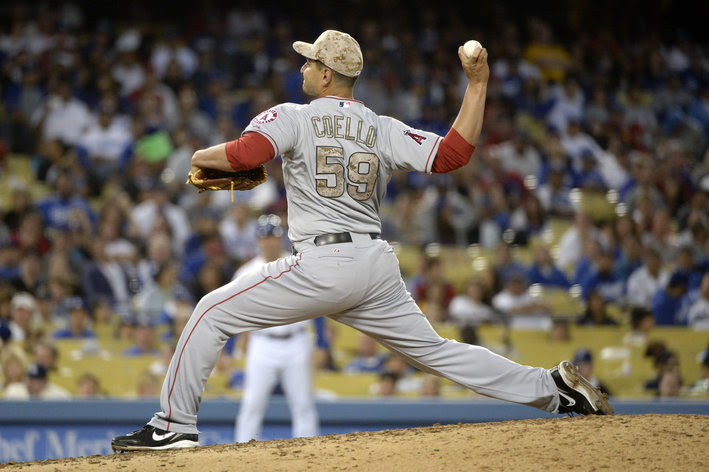 There is always something you've never seen before in baseball and 28-year old Los Angeles Angels pitcher Robert Coello has come up with a pitch last thrown perhaps 90 years ago.  It's thrown with a forkball grip (see below) but with no spin so it has knuckleball type action and unpredictability.

This is what it looks like as it is released.

And here below it is skidding towards the plate.  It handcuffs the batter and the catcher and the umpire is so startled he calls it a ball when it is clearly a strike.  It's taken years for Coello to learn to throw the pitch with some semblance of control but so far this year he's had great success.  In 10 1/3 innings, he has given up only six hits and one walk while striking out 18.

Jeff Pasan wrote an article about the pitch, which Coello has taken to calling the WTF since "Catchers call it that.  Hitters say it", noting that:

"Whereas other pitchers impart backspin on their splitters and the traditional forkball from masters such as old-style fireman Elroy Face had a tumbling effect, a la curveball, Coello's finds a happy medium: When he throws it right, it doesn't spin at all.


Physicist Alan Nathan, a professor at the University of Illinois who studies baseball and has a particular interest in the knuckleball, hadn't ever seen a pitch like Coello's. His preliminary theory on the pitch: His thumb on the underside of the ball exerts backspin, counteracting the tumbling effect his top fingers put on the ball and balancing the torque so perfectly that the pitch has a knuckleball effect with superior speed (around 80 mph)."


It has fascinated baseball historian Rob Neyer so much he's written two articles about the pitch, the first of which is titled "Robert Coello Is Throwing an Ancient New Pitch".  Neyer claims that the last major league pitcher to throw a forkball with knuckleball type action was Bullet Joe Bush with the New York Yankees in the 1920s.  He's also suggested that rather than calling it the WTF, a "knorkball" or "forkleball" might be better.