A cautionary note from GK Chesterton

In the matter of reforming things, as distinct from deforming them, there is one plain and simple principle; a principle which will probably be called a paradox. There exists in such a case a certain institution or law; let us say, for the sake of simplicity, a fence or gate erected across a road. The more modern type of reformer goes gaily up to it and says, “I don’t see the use of this; let us clear it away.” To which the more intelligent type of reformer will do well to answer: “If you don’t see the use of it, I certainly won’t let you clear it away. Go away and think. Then, when you can come back and tell me that you do see the use of it, I may allow you to destroy it".

Chesterton continues (and how can you not take advice from a guy who looked like this): 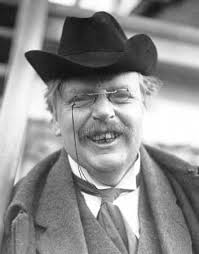 This paradox rests on the most elementary common sense. The gate or fence did not grow there. It was not set up by somnambulists who built it in their sleep. It is highly improbable that it was put there by escaped lunatics who were for some reason loose in the street. Some person had some reason for thinking it would be a good thing for somebody. And until we know what the reason was, we really cannot judge whether the reason was reasonable. It is extremely probable that we have overlooked some whole aspect of the question, if something set up by human beings like ourselves seems to be entirely meaningless and mysterious. There are reformers who get over this difficulty by assuming that all their fathers were fools; but if that be so, we can only say that folly appears to be a hereditary disease. But the truth is that nobody has any business to destroy a social institution until he has really seen it as an historical institution. If he knows how it arose, and what purposes it was supposed to serve, he may really be able to say that they were bad purposes, that they have since become bad purposes, or that they are purposes which are no longer served. But if he simply stares at the thing as a senseless monstrosity that has somehow sprung up in his path, it is he and not the traditionalist who is suffering from an illusion.

Good advice, though I suspect that Chesterton and I might set the bar at different heights for when certain types of reform are justified.

While Chesterton's suggested query can be seen as common sense, in the post-modern academic theory in which our culture marinates the question often never arises in the first place. In a world which contextualization driven by race, gender, ethnicity and class and overlaid with concepts of social justice is deterministic, the individual reasoning their way to an answer "doesn't amount to a hill of beans in this crazy world of ours" (see Bogart (1943)).  If it is the categories we fit into that lead to the structure of our world there is no need to ask Chesterton's question about the use of an institution or a law.  History does not matter since ascertaining the correct context will lead you to the correct, and possibly new and revolutionary, answer without any reference to the past.  Kind of like Cambodia Year Zero.

Oddly enough, while post-modern theory is hostile to the role of the individual, its postulates actually leave societies more susceptible to the manipulation of highly skilled and motivated individual demagogues.
Posted by Mark Stoler at 6:00 AM