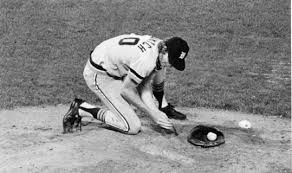 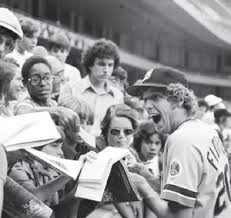 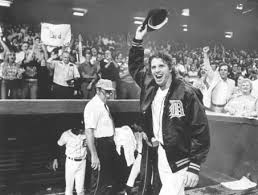 On the evening of May 25, 1976 a friend and I went to Fenway Park to see the Red Sox play the Detroit Tigers (thank goodness for Baseball-Reference.com so I could figure out the exact date).  The game remains a vibrant memory for two reasons.

First, at that time of the year a night game can get pretty cold if the wind is blowing off the water and it was that night.  According to Baseball-Reference the game temperature was 48 but with the strong breeze it felt a lot colder - by the 7th inning there was no more hot coffee to be found in the park!  I've seen a lot of games in Fenway but that night was the coldest I've ever been at the park.

Second, from our seats up the third base line, we watched quite a pitching duel between Luis Tiant ("El Tiante") and a little known Tigers rookie, Mark Fidrych.  Fidrych was a Massachusetts native, hailing from Northboro near Worcester. Tiant was the most entertaining pitcher of that era, having transformed himself after an arm injury from a flamethrowing fastball pitcher in the late 60s to a crafty hurler with a variety of entertaining deliveries, including turning his back completely on hitters.  Here is Looie's windup:
That night, both pitchers threw complete games with Tiant winning 2-0.  The winning blow was a two-run homer by Yaz in the 4th.  Tiant struck out 8 (including slugger Willie Horton three times) and ended the game by striking out pinch hitter Dan Meyers on an off-speed pitch.  Though he lost, Fidrych pitched well, giving up only 6 hits and two walks.  The rookie only struck out one batter but he induced grounder after grounder with only 4 balls reaching the outfield.  The game only took 1:57 which was fortunate since we were freezing.

At the end of the game, Fidrych had a season record of one win and one loss.

I also saw Fidrych pitch on his return to Boston on June 24, 1976.  Since the loss in Boston, he'd won his next five starts (including four complete games) and had become known as The Bird for his eccentric antics, including talking to the baseball, getting on his knees to sculpt the mound, as well as his resemblance to the Sesame Street character and his enthusiastic and upbeat nature. He was in the big leagues and he was having fun - lots of fun and his exuberance got everyone's attention.  He was also a fine pitcher.  It seemed like everything he threw that year was low with a lot of movement.

This time it was 86 degrees at game time and The Bird beat the Sox and Rick Wise 6-3 with another complete game.  The first time I saw Fidrych was happenstance but on this night I was in the bleachersand we came to see The Bird.  Over the first three innings he blanked the Sox, giving up only one hit.  Then, in the bottom of the 4th, with the Tigers leading 1-0 he seemed to unravel.

Cecil Cooper led off with a long triple to centerfield.  Doug Griffin grounded out but Cooper scored on the play.  Fred Lynn then hit a line drive home run.  The next batter, Carl Yazstremski, walloped another line driver homer.  Jim Rice hit a long fly to the warning track in deep right for the second out and Carlton Fisk followed with a sharp liner to left field for a single.  Three runs had scored and 5 of the 6 batters had hit the ball hard off of Fidrych.  Then, as suddenly as it started it was over as he got Dwight Evans to hit a popup in foul territory near third base.

Over the next five innings The Bird was back in control, giving up only two singles, while the Tigers scored five times.  The game ended with Fidrych striking out Rico Petrocelli.

With his next start, on Monday Night Baseball against the New York Yankees on June 28, The Bird became a certified nationwide sensation.  You can get a sense of the excitement he generated by watching him get the last out of that game and the Tigers crowd going nuts (announced by Bob Uecker who still broadcasts the Brewers games).
It was a magical year for The Bird as he finished with a record of 19 wins and 9 losses, leading the league in ERA and being named Rookie Of The Year. 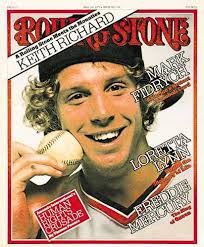 But in spring training the next year, The Bird hurt his knee and then injured his rotator cuff.  He tried over the next four seasons to come back but could never pitch effectively again and by 1980 was out of baseball.  Mark Fidrych returned to his home town, working as a contractor hauling asphalt and gravel with his truck. 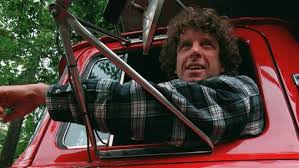 By all accounts he remained an animated, enthusiastic and optimistic person.  A friend played with him in a pickup basketball game in the 1980s and said he was a lot of fun, congratulating everyone on good plays.

Tragically, he died in 2009, at the age of 54 when the truck he was working on fell on him.  Here is Peter Gammons reminiscing about The Bird.
Posted by Mark Stoler at 6:00 AM