Fifty years ago this month, the song that became the staple of every teenage garage rock band in the 1960s, Louie Louie by The Kingsmen, was released.  The song, written by Richard Berry, inspired hundreds of cover versions as well as the renowned 1987 Louie Louie Marathon by radio station KFJC which over 63 hours played 800 different versions of the song. 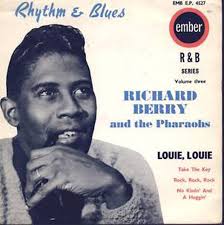 Berry wrote the song in 1955 and released it as a single in 1957 without much success.  It was a sea chanty style ballad about a Jamaican sailor returning to his girl (listen to his version).  In 1960 Rockin' Robin Roberts and The Wailers (a US, not Jamaican band) released a version which had local success in the Northwest where it remained popular. In April 1963 two Portland, Oregon bands, The Kingsmen and Paul Revere & The Raiders (who went on to greater success in the mid-1960s) recorded competing versions at the same studio.  The Kingsmen version was released first by a small record label and achieved some chart success.  However, it was the October 1963 re-release by Wand Records, a bigger label, that propelled its popularity.  The record entered the Billboard Top 10 in December, peaking at #2, remaining in the Top 10 until early February (when The Beatles took over the charts). 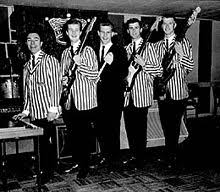 The Paul Revere & The Raiders version initially achieved more local success in the Portland area and after it was released by Columbia Records became more popular in the Western United States but after the re-release of The Kingsmen version, Mitch Miller of Columbia, who hated rock n roll, halted all promotion of the Raiders single.  Here's the Raiders version.

The Kingsmen's version of Louie Louie achieved notoriety because of its allegedly obscene lyrics (and I can tell you as a teenager in the 60s I was confidently told by older teens exactly how obscene they were) which resulted in several radio stations refusing to play it and a ban announced by the Governor of Indiana.  I heard that the FBI also investigated the song for alleged obscenity but always thought that was an urban myth.  Well, it turns out they did and the The Smoking Gun obtained the documents!  The FBI concluded that it was:

"unable to interpret any of the wording in the record and, therefore, could not make a decision regarding the matter"

These are the real lyrics:

Louie Louie, me gotta go
Louie Louie, me gotta go
Fine little girl she waits for me
Me catch the ship for cross the sea
I sail the ship all alone
I never think I'll make it home
Three nights and days me sail the sea
Me think of girl constantly
On the ship I dream she there
I smell the rose in her hair
Me see Jamaica moon above
It won't be long, me see my love
Me take her in my arms and then
I tell her I never leave again

The Rockin Robin Roberts version introduced the "yeah, yeah, yeah, yeah, yeah, yeah" and the "c'mon let's go" at the end.   And with that, here are The Kingsmen, complete with indecipherable lyrics, wild guitar break and the lead singer coming in too early after the break!
The larger cultural impact of the song can be seen in this clip from Animal House.And here are The Kinks, riding the tidal wave of their first hit single, You Really Got Me, performing Louie Louie in 1965.  This version carries some significant rock lineage.  The producer of The Kinks was Shel Talmy, who was also the first producer for The Who.  He encouraged The Who to emulate The Kinks guitar sound on Louie Louie and you can hear the results in The Who's first hit single, I Can't Explain.
Posted by Mark Stoler at 7:30 AM