The Death Of Captain Waskow

Ernie Pyle was the most popular American correspondent of WWII, and the most admired and respected by American soldiers because he spent his time on the front lines, not at headquarters.  His most famous column, published on January 10, 1944, recounted the death of Captain Henry Waskow near San Pietro, Italy on December 12, 1943.  American forces landed at Salerno on the Italian mainland in September 1943 and after initially advancing quickly up the peninsula their advance slowed to a crawl by late fall.  Waskow's death occurred near the beginning of six months of grinding combat contained within an area of less than 200 square miles to the north of Naples (an area about the size of the borough of Queens in New York City, so small that it took us less than 5 minutes to traverse via fast train earlier this month), culminating in multiple Allied assaults on, and the destruction of, the ancient Benedectine monastery at Monte Cassino which finally fell in May 1944. The Battle of San Pietro was also the subject of a powerful and moving documentary by director John Huston.  It was approved for release by Army Chief of Staff George C Marshall over the objection of some Army officers who disliked its realistic portrayal of combat and the death of American soldiers.  The 143rd Infantry Regiment of the 36th Division, which is mentioned frequently in the film, is the unit in which Capt Waskow served.

Pyle's column on Capt Waskow was reprinted nationwide and read on the radio by some of the most popular broadcasters of the time. 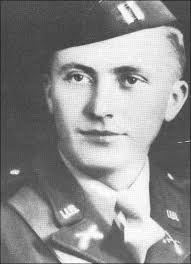 In this war I have known a lot of officers who were loved and respected by the soldiers under them. But never have I crossed the trail of any man as beloved as Capt. Henry T. Waskow of Belton, Texas.

Capt. Waskow was a company commander in the 36th Division. He had led his company since long before it left the States. He was very young, only in his middle twenties, but he carried in him a sincerity and gentleness that made people want to be guided by him.

"After my own father, he came next," a sergeant told me.
"He always looked after us," a soldier said. "He’d go to bat for us every time."
"I’ve never knowed him to do anything unfair," another one said.

I was at the foot of the mule trail the night they brought Capt. Waskow’s body down. The moon was nearly full at the time, and you could see far up the trail, and even part way across the valley below. Soldiers made shadows in the moonlight as they walked.

Dead men had been coming down the mountain all evening, lashed onto the backs of mules. They came lying belly-down across the wooden pack-saddles, their heads hanging down on the left side of the mule, their stiffened legs sticking out awkwardly from the other side, bobbing up and down as the mule walked.

The Italian mule-skinners were afraid to walk beside dead men, so Americans had to lead the mules down that night. Even the Americans were reluctant to unlash and lift off the bodies at the bottom, so an officer had to do it himself, and ask others to help.

The first one came early in the morning. They slid him down from the mule and stood him on his feet for a moment, while they got a new grip. In the half light he might have been merely a sick man standing there, leaning on the others. Then they laid him on the ground in the shadow of the low stone wall alongside the road.

I don’t know who that first one was. You feel small in the presence of dead men, and ashamed at being alive, and you don’t ask silly questions.
We left him there beside the road, that first one, and we all went back into the cowshed and sat on water cans or lay on the straw, waiting for the next batch of mules.
Somebody said the dead soldier had been dead for four days, and then nobody said anything more about it. We talked soldier talk for an hour or more. The dead man lay all alone outside in the shadow of the low stone wall.

Then a soldier came into the cowshed and said there were some more bodies outside. We went out into the road. Four mules stood there, in the moonlight, in the road where the trail came down off the mountain. The soldiers who led them stood there waiting. "This one is Captain Waskow," one of them said quietly.

Two men unlashed his body from the mule and lifted it off and laid it in the shadow beside the low stone wall. Other men took the other bodies off. Finally there were five lying end to end in a long row, alongside the road. You don’t cover up dead men in the combat zone. They just lie there in the shadows until somebody else comes after them.

The unburdened mules moved off to their olive orchard. The men in the road seemed reluctant to leave. They stood around, and gradually one by one I could sense them moving close to Capt. Waskow’s body. Not so much to look, I think, as to say something in finality to him, and to themselves. I stood close by and I could hear.

Another man came; I think he was an officer. It was hard to tell officers from men in the half light, for all were bearded and grimy dirty. The man looked down into the dead captain’s face, and then he spoke directly to him, as though he were alive. He said: "I’m sorry, old man."

Then a soldier came and stood beside the officer, and bent over, and he too spoke to his dead captain, not in a whisper but awfully tenderly, and he said:
"I sure am sorry, sir."

Then the first man squatted down, and he reached down and took the dead hand, and he sat there for a full five minutes, holding the dead hand in his own and looking intently into the dead face, and he never uttered a sound all the time he sat there.

And finally he put the hand down, and then reached up and gently straightened the points of the captain’s shirt collar, and then he sort of rearranged the tattered edges of his uniform around the wound. And then he got up and walked away down the road in the moonlight, all alone.

After that the rest of us went back into the cowshed, leaving the five dead men lying in a line, end to end, in the shadow of the low stone wall. We lay down on the straw in the cowshed, and pretty soon we were all asleep.

Capt Waskow is buried in the Rome-Sicily American Cemetery and Memorial in Nettuno, Italy, about 38 miles south of Rome, along with 7,859 other American servicemen.  Henry Waskow was 25 years old when he died, one of eight children from a poor Baptist family in Texas.  He was an outstanding student, president of his High School Class and took 2nd prize in a statewide oratory contest.

Waskow's last letter, written to his parents and sent to his sister for opening only in the event of his death, was made public 15 years later and read in part:

"I will have done my share to make this world a better place in which to live.  Maybe when the lights go on again all over the world, free people can be happy and gay again . . . If I failed as a leader, and I pray God I didn't, it was not because I did not try."


The death and destruction he witnessed at San Pietro left Pyle greatly depressed and he abandoned the front lines for Allied headquarters in Caserta, Italy where he drank heavily, in despair that his writing could not convey to the American public back home what he had witnessed. He drafted the piece on Waskow but, feeling it was inadequate, did not submit it until was persuaded to do so by a friend.   Pyle went on to receive the Pulitzer Prize in 1944 but he had enough of the war and returned to the United States in late 1944.  Nonetheless, in early 1945 he felt compelled to join our troops in the Pacific after receiving many requests from the soldiers, sailors and Marines there to tell their story.

On April 18, 1945 Ernie Pyle died instantly when hit in the head by a Japanese machine gunner on the small island of Ie Shima, just west of Okinawa. 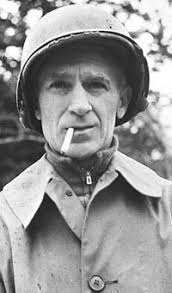 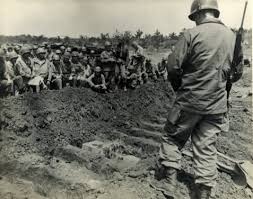 Two months to the day after Ernie's death, The Story of G.I. Joe was released.  Filmed with Pyle's approval before he went to the Pacific, the movie tells a fictionalized version of Captain Waskow's company and ends with the death of the captain (called Walker in the film and played by Robert Mitchum).  To play Pyle, the army was persuaded to release Burgess Meredith from service.  It is about as gritty a film as you will find made during the war.
Posted by Mark Stoler at 11:00 AM