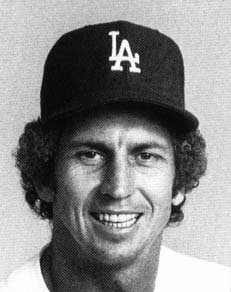 Don Sutton is in the Baseball Hall of Fame.  He won 324 games in a career that stretched from 1966 to 1988 and was always regarded as a very good pitcher but never a great pitcher.  Don won 20 or more games only once in his career (21 in 1976) but won between 15 and 19 games in eleven season.  He won 12 games in his rookie year and 15 games in his 21st season (1986).  Don never led the league in most games won.  He won the ERA title once in a season in which he won only 13 games (1980) and did not lead the league in any other major category.  Don played with five different teams during his career, Dodgers, Astros, Brewers, A's and Angels.  He was respected.  He was not an overpowering pitcher but had good stuff, good control and could always be counted upon to be steady and reliable.  Don was born in 1945 in Clio, Alabama, moved to Los Angeles when he joined the Dodgers as a rookie and maintained it as his residence.  When he joined the Dodgers his teammates in the starting rotation were Sandy Koufax and Don Drysdale.

Tom Petty is in the Rock n Roll Hall of Fame. His recording career started in 1977 and is still going today but in Don Sutton terms the core of his career is from 1977 to 1995.  THC always considered him a solid, reliable rocker and doesn't think that anyone else ever considered him one of the all time greats of rock.  Never in my top five rockers at any point but always producing good rock n roll.  He never had a #1 album or single until his most recent album, Hypnotic Eye, released on July 29, 2014, reached the top spot.  He's played in five different recording configurations during his career, Tom Petty & The Heartbreakers, Traveling Wilburys, Mudcrutch, in collaboration with Stevie Nicks and as a solo artist.  Tom was born in 1950 in Gainesville, Florida and moved to Los Angeles when his career took off and where he still lives.  In the Traveling Wilburys his bandmates included George Harrison, Bob Dylan and Roy Orbison.

Let's take a deeper look at the highlights of Petty's long career:

1977
Breakdown becomes the first hit for Tom Petty & The Heartbreakers.  Simple and with a catchy guitar hook.

American Girl.  Catch the reference to Florida Route 441 which runs the length of the state.

1978
Listen To Her Heart with the band channeling The Byrds.

1980
Refugee, which remains a standard on Classic Rock stations.

1981
Stop Draggin' My Heart Around with Stevie Nicks.  Released on her solo album and written by Petty and Heartbreaker guitarist Mike Campbell.

The Waiting.  One of my personal favorites with a title inspired by a conversation with Roger McGuinn, one of Petty's biggest influences (via The Byrds).  THC saw Petty & The Heartbreakers play this live in July 1986 while on tour with Bob Dylan.  The show had five segments; Petty opening, Dylan doing a set, Petty back for another set, Dylan returning and then Dylan and Petty closing together.  Petty turned in a solid, enjoyable performance; Dylan was terrible. Found this live clip from the prior year of The Waiting and it is a much more dynamic version than the studio recording.  Skip the first 1:30 of the video as Petty is just talking about nothing.

1982
You Got Lucky featuring an epically bad video from the early days of MTV.  Good lyric with attitude though.

1985
Don't Come Around Here No More with its weird and unsettling video.

1988
As part of the Traveling Wilburys, Handle With Care (written by George Harrison) becomes a hit.

1989
End Of The Line by the Traveling Wilburys.

Petty releases his first solo album (Full Moon Fever) filled with strong tunes like Runnin' Down A Dream (which ends with a searing guitar solo by Mike Campbell), I Won't Back Down (with video featuring Ringo Starr and George Harrison; Harrison played on the recording, Starr did not), Free Fallin', A Face In The Crowd and an almost note for note recreation of I'll Feel A Whole Lot Better by The Byrds (to compare with the original click here).  It's Tom Petty's 20-win season.

1991
Learning To Fly and Into The Great Wide Open.with Johnny Depp and Faye Dunaway appearing in ths video.

1993
A new goodie on the Heartbreaker's Greatest Hits CD, Mary Jane's Last Dance with a video that has nothing to do with the lyrics but features Kim Basinger.  Smart lyrics and crunching guitar.
1994
You Don't Know How It Feels with Tom doing his Neil Young thing. From Petty's second solo album.

2008
Scare Easy with his reunited first band, Mudcrutch, played over the closing credits of the movie Appaloosa.  For more on the song and movie see the post Scare Easy.
Posted by Mark Stoler at 4:00 PM