THC and the Mrs recently returned from a trip to France, having spent a week in Paris and another week in Perigord.  Since THC's anthropological study from his last research trip to France still awaits publication in the prestigious Journale du Voyages a la Recherche D'oeuvres L'Objects Extraordinaire (see Paris Anthropologie for more details) he will cover his latest adventure in a series of travelogue posts.

Perigord is an ancient county in France that aligns itself neatly with the current day Department of Dordogne in the southwest, about 100 miles inland from Bordeaux.

The area we visited is referred to as Perigord Noir, because of the many black chesnut trees, and is in the southeast corner of the Department.  It is very hilly, with cliffs along the two major river valleys (the Dordogne and the Vezere) dotted with small villages, towns and castles along narrow windy roads.  We stayed in the small bastide town of Domme, situated on a cliff about 400 feet above the Dordogne.  The bastides were built by French and English kings between the 13th and 14th centuries and designed as defensive bastions to provide security for local farmers.

The need for the bastides goes to the history of Perigord.  Today the area is picturesque and prosperous as a vacation area but most of its history is pretty dismal.  After the collapse of Roman rule in the area during the 5th century, the region descended into darkness for several centuries.  When it comes back to light it is in the midst of several centuries of conflict between the English and French crowns culminating in the Hundred Years War (1337-1453).  During much of the period between the 12th and 15th centuries, the Dordogne River was the dividing line between the two kingdoms, with the French on the north side and English on the south.  During this period the peasants were subject to pillaging, looting and worse from both sides.  In the midst of this also occurred the bloody suppression of the heretic Cathars who had many strongholds in the region.

A few decades after the end of the Hundred Years War, the religious wars began between Catholics and Protestants and again this region saw a great deal of violence between adherents of both sects.  Once that was finished in the early 17th century, the region reverted to its normal state of poverty, albeit more peaceful.  While the 19th century saw some prosperity the slow economic decline soon began again and in the decade after the Second War War, there was large scale migration from the region by younger folks to new jobs in the growing industrial regions of France.

It was only with the decision of the French Government in the 1960s to encourage the growth in the region as a tourist center via the use of subsidies and tax incentives for second homeowners, as well as the reconstruction of the medieval center of the town of Sarlat near the Dordogne that the fortunes of the region revived.  Today it is a popular destination for tourists across Western Europe, and particularly Britain. 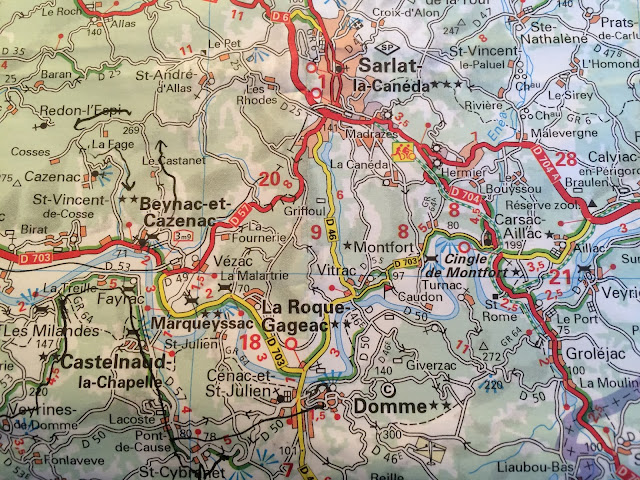 For orientation, Domme is in the lower center of the map,  Sarlat is in the upper center.  The Dordogne River flows from right to left through the center.   On bends in the river about five miles downstream are the castles of Castlenaud and then Beynac.  Castelnaud was occupied by the English during most of the Hundred Years War while Beynac was ruled by the French. 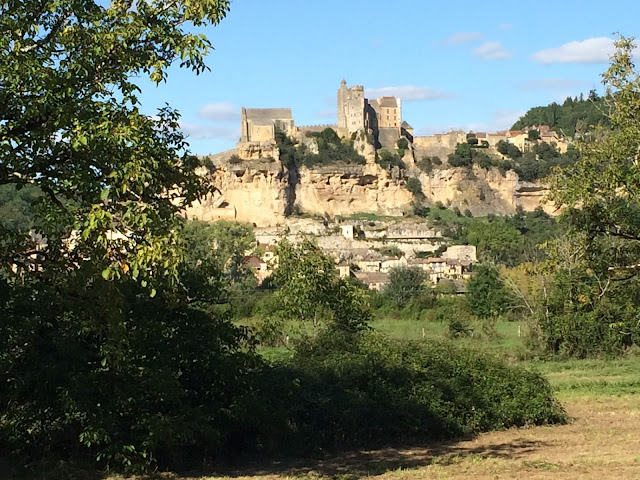 Beynac from the south side of the Dordogne.  The village of Beynac is at the foot of the cliff upon which the castle sits. 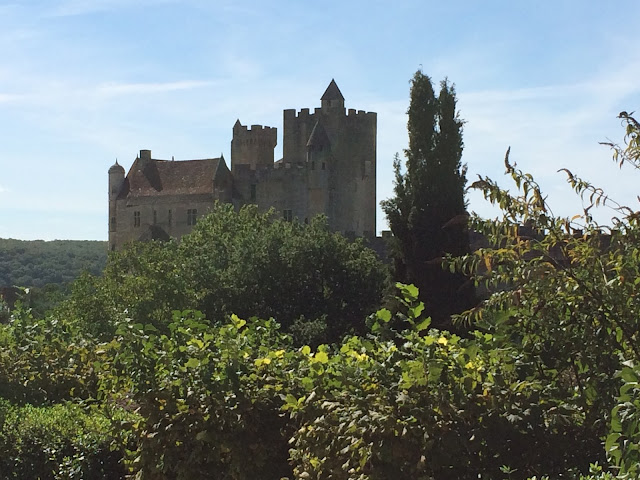 The castle as you approach from the north side. 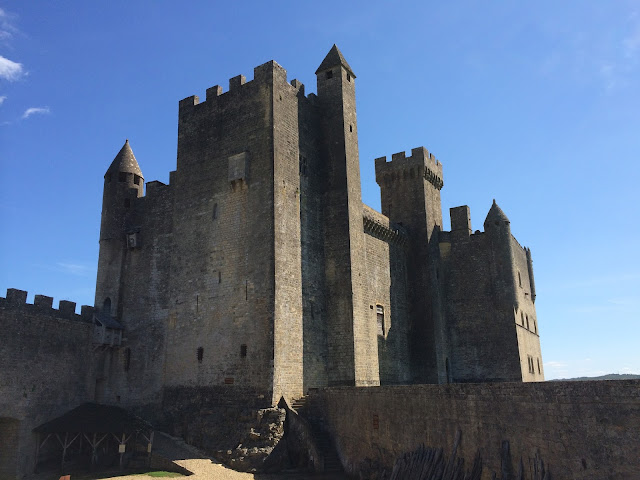 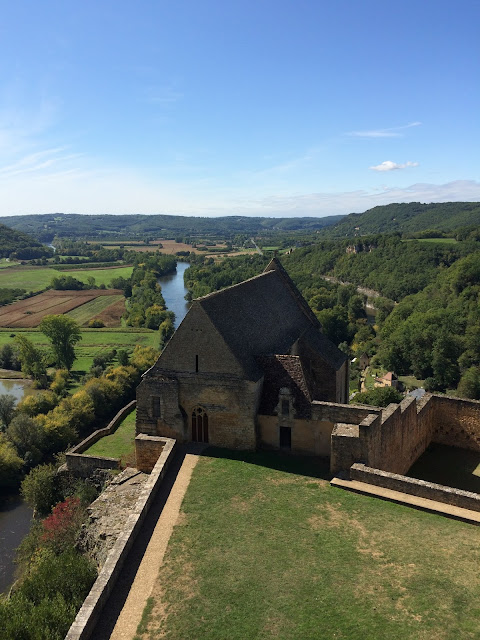 From the castle overlooking the river. 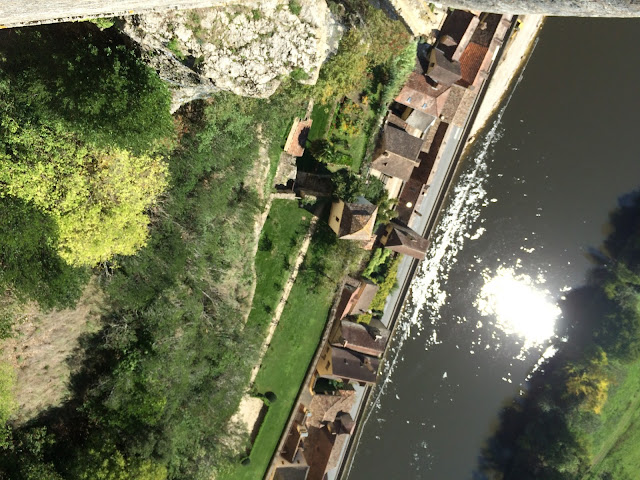 Looking down on the village. 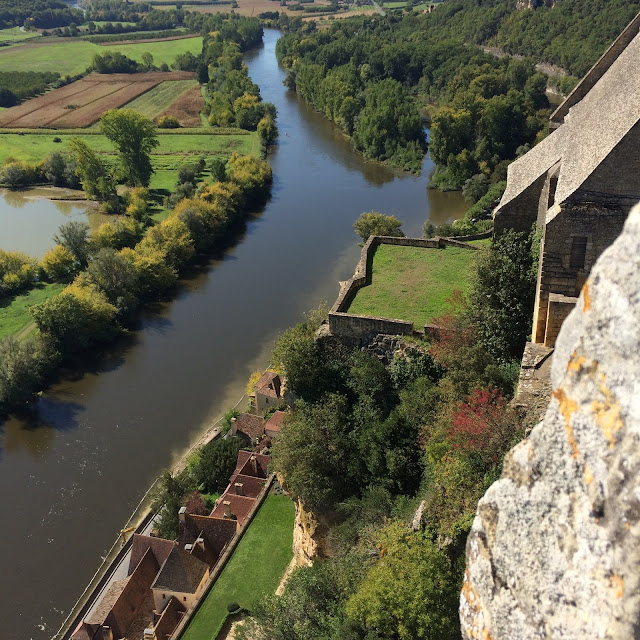 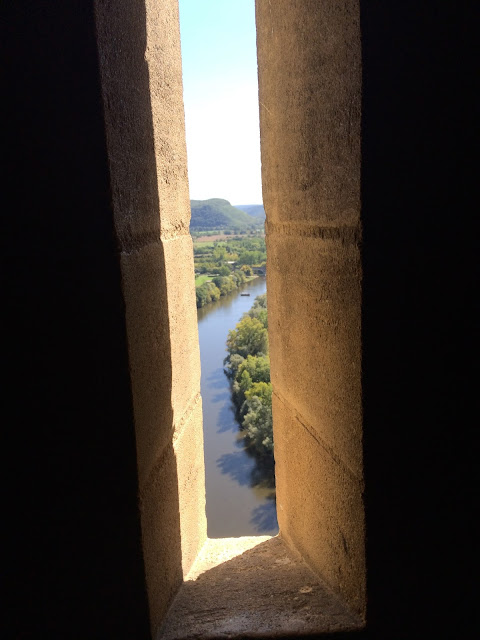 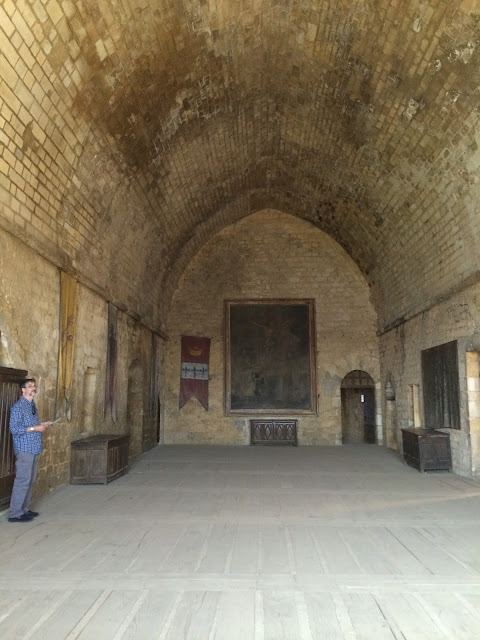 Meeting hall in the castle. 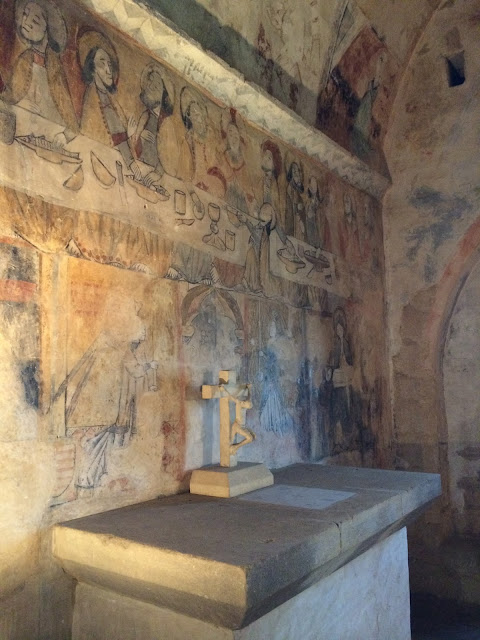 And now on to Castlenaud: 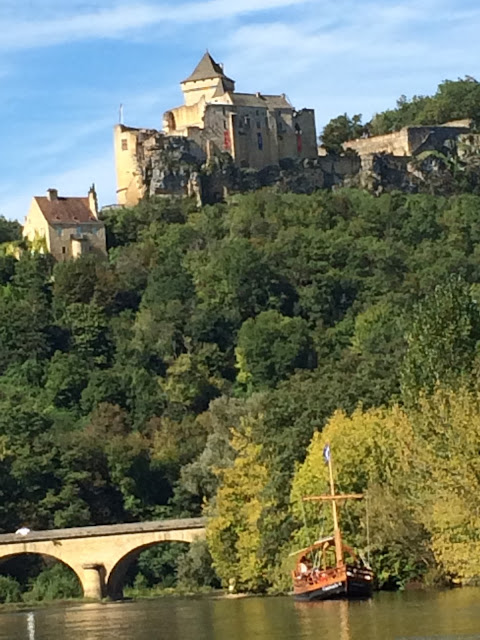 Looking around from the castle: 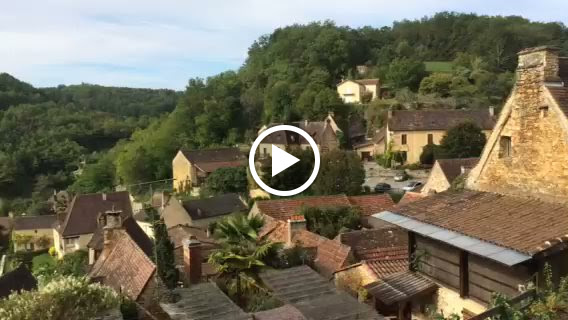 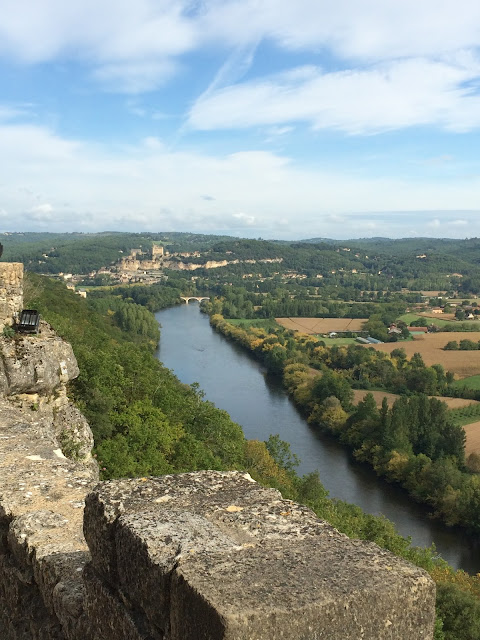 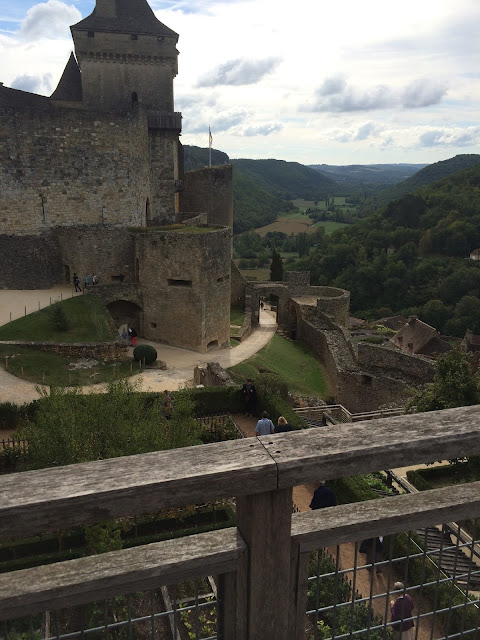 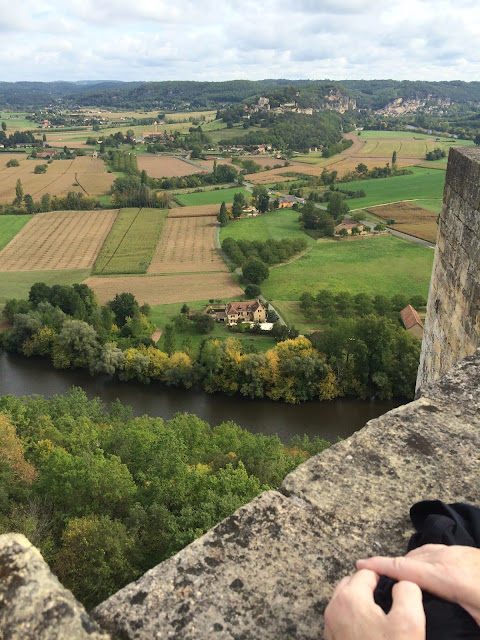 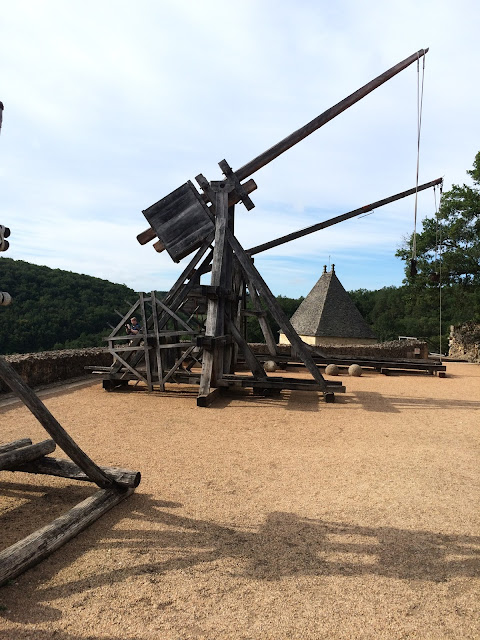 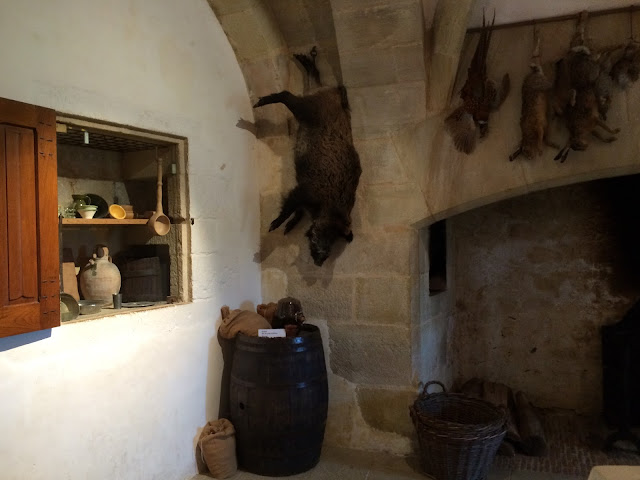