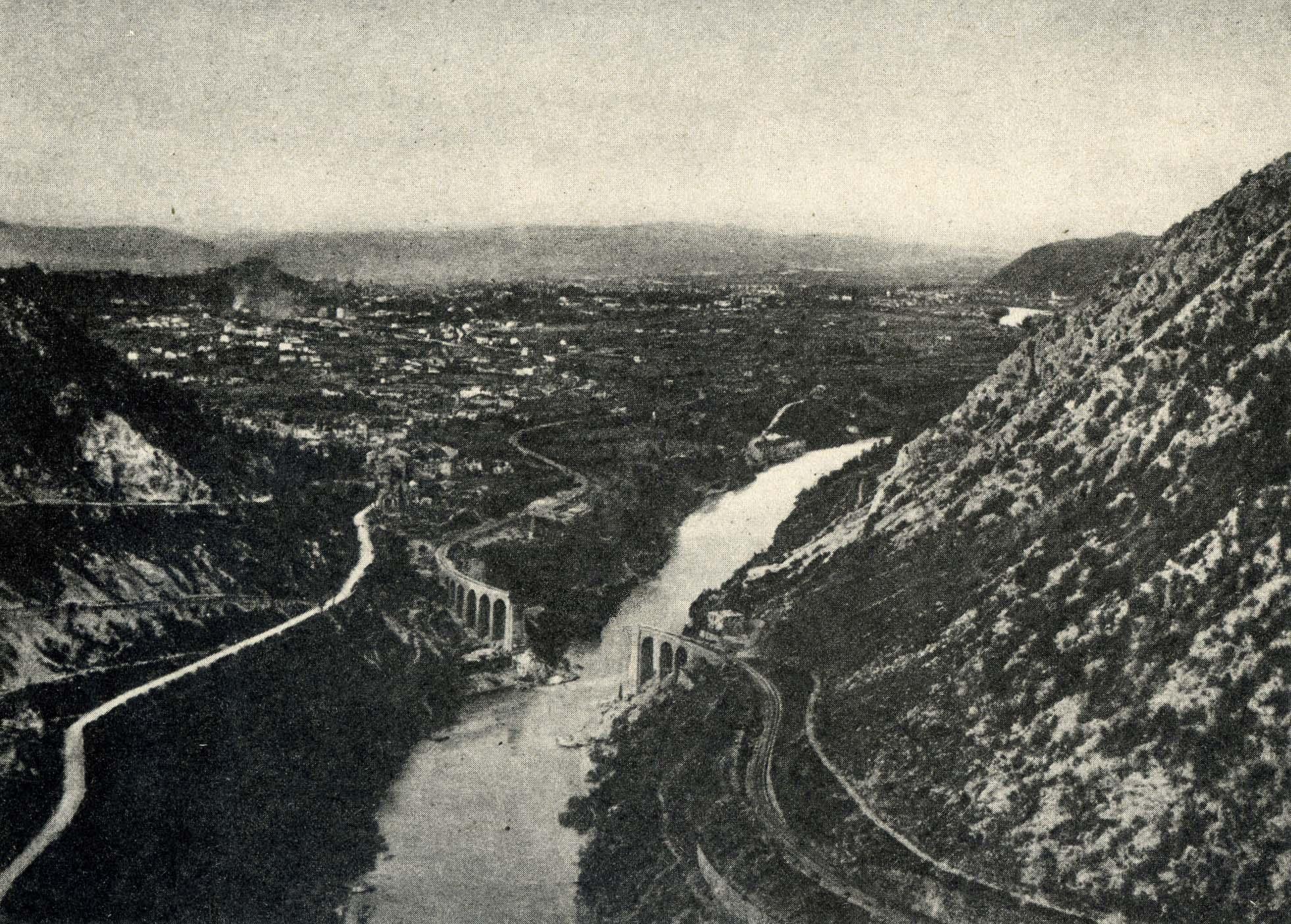 (The Isonzo from Wikipedia)

With dawn breaking 1,200 artillery pieces opened fire on enemy positions across the river.  It was the morning of October 18, 1915.  The artillery was that of the Italian Army.  The enemy were the forces of Austria-Hungary (AH).  The river was the Isonzo.  The firing marked the opening of the Third Battle of the Isonzo.  The dreary drawn out slaughter of World War One was continuing a mere 80 miles from Venice.

We are much more familiar with the battlefields of the Western Front - Somme, Verdun, Ypres, Marne, the Argonne Forest and even Loos but the lesser known and even more futile Battles of the Isonzo should be marked as examples of how horrible that war was.

Historians disagree on how many battles took place along the Isonzo from June 1915 through the fall of 1917; depending on how you are counting it's ten, eleven or twelve.  With the exception of the final battle, about a million soldiers on both sides were killed, wounded or captured and with the exception of that final battle all were offensives by the Italian Army.  The later battles were the backdrop for Ernest Hemingway's novel, A Farewell To Arms.  Hemingway served as an ambulance driver supporting the Italians.

Italy was not involved in the initial outbreak of the war in August 1914; in fact it had a secret alliance with Germany and Austria-Hungary but refused to enter the war on their side.  For the next several months Italy entertained offers from both sides, eventually deciding to join Britain and France based on their assurances of territorial gains in the Tyrol and Istria at the expense of the Austrians after the end of the war.

On May 23, 1915, Italy declared war on AH.  Although mobilization of the Italian army had begun earlier in the year, the military was hamstrung by a lack of equipment; of 1.2 million men called to arms there was only equipment for 700,000.  Furthermore, the military leaders were not notified by the government until a few days beforehand of the planned declaration of war.

The Isonzo battles arose from the reality of the military situation and geography.  Militarily, AH would be content to remain on the defensive since its army was already fully occupied coping with a successful Russian offensive and secondarily with Serbia.  And since it was the Italians who had territorial aspirations it was they who would launch the offensives.

Map of the Italian front.  The Isonzo is along the right side bordering the Adriatic. 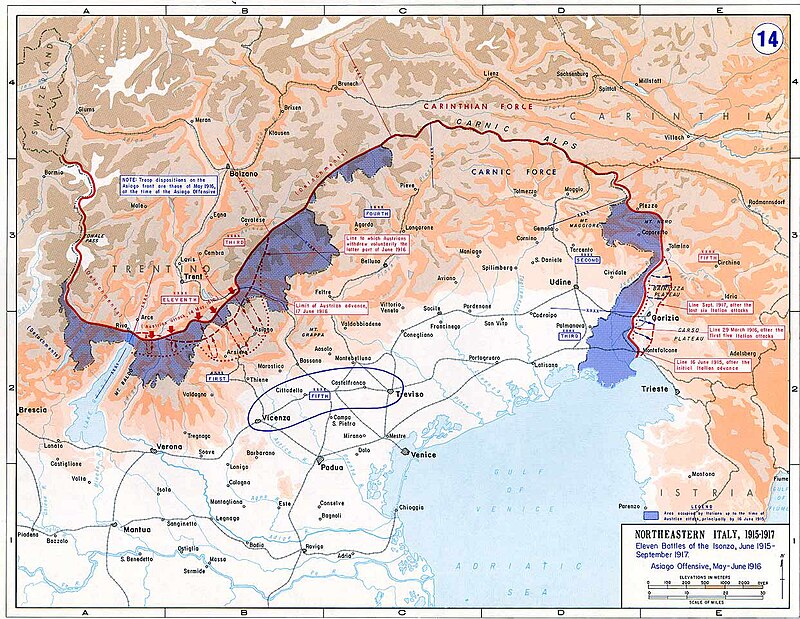 The AH could afford to adopt a defensive posture on the Italian front since most of the 400 mile border between the two countries was dominated by steep mountains.  It was only along the 60 mile stretch of the Isonzo which drained to the Adriatic Sea were there was some relatively open land and it was here that Italian Army Chief of Staff Luigi Cadorna focused his attacks.  But concluding that attacking along the Isonzo was a better option than attacking through the Alps did not make the Isonzo a good option.  Because it drained the Alps the river was frequently flooded and during the war the region was subject to record rainfalls and snowmelts.  Moreover, on the northern end of the Isonzo battlefield along the Austrian side were mountains that provided the AH army great vantage points to observe any Italian buildups on the other side of the river.  In addition, the remainder of the battlefield was also not a particularly favorable for offensive action as described by the British Official History of the Italian Front (from worldwarone.com); for reference the area east of the Isonzo was on the AH side:

East of the [Isonzo] the arid limestone uplands sloping gently westwards are deeply cut into a tangle of ridges and valleys. Here the denuded plateaux, known to fame as the Bainsizza and the Carso, the wooded Selva di Ternova lying back between them, form enormous natural fortresses, towering 2,000 ft or more over the surrounding lowlands. The Bainsizza is described as "not flat, but traversed by ridges which rise to a considerable height above the general level" and the Carso is depicted as "a howling wilderness of stones sharp as knives." [Italian troops came to hate the barren Carso, particularly, with its relentless summer sun and crushing winter wind called the "Bora".]

For these reasons the Third Battle of the Isonzo was as unsuccessful as the prior two for the Italians.  The official end date of the Third Battle was November 3, but the Fourth Battle which was essentially a continuation of the Third began on November 10 and lasted until December 2.  The Italians suffered 115,000 casualties during the two battles, the Austrian-Hungarians about 72,000.

(Italian army along the Isonzo front)

For over two years the Italians hammered away along the Isonzo line making very little headway.  The futility of these repeated efforts undermined the morale of the army and General Cadorna proved an uninspiring leader.  Finally on October 24, 1917 the AH, reinforced by German divisions (and a young officer named Erwin Rommel) launched a massive counteroffensive which shattered the Italian Army, inflicting 300,000 losses (mostly prisoners), driving it back to the outskirts of Venice where British and French divisions rushed from the Western Front helped to stiffen the defensive line.  This battle is alternatively known as the 12th Battle of the Isonzo or the Caporetto Campaign.

There were two positive aspects of the final battle.  First, it prompted the Italian government to finally remove the inept General Cadorna and secondly, it was also costly for the AH army which was almost as demoralized as the Italians.  They were unable to capitalize on the victory and advanced no further in the war.

Another sad episode in an unnecessary war.