Champ Ferguson was hanged that morning.  They got right to it.  In Nashville.  October 20, 1865.  Sure, the Civil War had wound down by then and most of the Reb soldiers had gone home without the Federal government bothering them.  But there were a couple of exceptions.  One was William Quantrill, the Confederate guerrilla who'd led the attack on Lawrence, Kansas in 1863 during which more than 150 civilian men and boys sympathetic to the Union were murdered.  Frank and Jesse James along with Cole Younger learned their bushwhacking trade serving under Quantrill.  Quantrill was finally hunted down in Kentucky where he was wounded and captured, dying on June 6.

Another was Captain Henry Wirz, commander of the notorious prisoner of war camp in Andersonville, Georgia where 13,000 Union prisoners died under horrendous conditions.  Wirz was one of only two men to be tried and convicted of war crimes in the aftermath of the Civil War.  The other was Champ Ferguson. 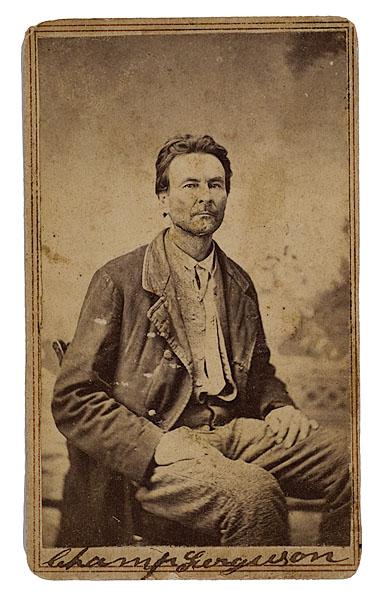 Clinton County in east Kentucky, was where Champ was born in 1821.  During the 1850s he moved his family just over the state line to White Country, Tennessee about halfway between Nashville and Knoxville.  Champ was always a rough guy.  Well before the war he was known as a "gambling, rowdyish, drinking, fighting, quarrelsome man" according to HistoryNet and in 1858 he'd killed Sheriff James Read of Fentress County.

When war broke out in 1861, there were many Union sympathizers in east Tennessee, including most of Champ's family but he decided to throw his lot in with the Confederates.  By early 1862 Ferguson had organized his own guerrilla band which varied over the course of the war from dozens to hundreds.  HistoryNet notes:


By the spring of 1862, relatively few major military engagements had taken place in Tennessee, but the Cumberland Mountains were filled with violence. Roaming bands of outlaws took advantage of the war to steal whatever they wanted with no regard for their victims’ politics. It was not uncommon for these outlaws simply to declare a man an enemy sympathizer and then take his possessions or even kill him. Families, friends, and neighbors were so passionately divided that even idle rumors questioning a man’s alignment could soon lead to his death. Many prudent people avoided their own homes.

It wasn't just east Tennessee.  Everywhere west of the Appalachians, guerrilla warfare thrived and raiding, destruction, murders and massacres happened all the way to Texas.  It was a brutal chapter in a war which gave license to those with the least restraint in society with each outrage provoking retaliation from the other side and further rounds of mutual brutality. History Net goes on to report:


In the middle of all this chaos stood Champ Ferguson. Many of the Union men he took prisoner — some in the army, some not — were found shot and often stabbed through the heart. Ferguson favored the Bowie knife and often finished his victims off with one. There were rumors of decapitations.


His first victim was a neighbor, William Frogg. When he rode up to the Frogg cabin, Mrs. Frogg suspected no ill will; she had known Ferguson since childhood, and offered him a seat and an apple. He refused both, and sought out her husband, who lay ill in his bed. Champ inquired as to Frogg’s health, and his neighbor responded, “I am very sick. I had the measles, and have had a relapse.”


Champ accused Frogg of having contracted his illness while visiting the Yankee recruitment center at nearby Camp Dick Robinson, which Frogg vehemently denied. Ferguson simply drew his pistol and shot Frogg twice in front of his wife and child, killing him on the spot. He then ransacked the cabin, looking for weapons. At his trial four years later, Ferguson would voice what would become his constant refrain: “I considered myself justified in killing him.”

He also claimed at his trial that he had personally killed over one hundred men in the war, all in self-defense.

It was an event in early October 1864 that would eventually seal Champ's fate.  The main source of salt for the Confederacy, an essential element for its survival, were the saltworks in the aptly named town of Saltville, Virgina near its border with Tennessee.  Finally realizing the importance of the saltworks the Union launched a raid against the town which was defended by regular Confederate troops along with Ferguson's ragtag band.  The Federal force was repulsed and many prisoners and wounded were left in Rebel hands.  Ferguson and his men, possibly with some participation from regular Confederate troops set about murdering the captive Yankees, particularly those from the 5th US Colored Cavalry and their white officers.  According to the Times account:


Following the fighting, the Union lieutenant Elza C. Smith of the 13th Kentucky Cavalry lay wounded in the Emory and Henry College Hospital, along with several of his white and African-American soldiers. Suddenly, Ferguson burst into the ward at the head of his band. He strode across the room, and when he came to Smith’s cot, he raised his rifle and snarled, “Do you see this?” He placed the muzzle a foot from Smith’s forehead as the injured man lay helpless, pleading for his life.

Ferguson drew back the hammer, and … “click!” The weapon misfired. He cocked his rifle and pulled the trigger twice more, with the same result. Finally, mercifully, on the fourth attempt the gun discharged, and Lieutenant Smith lay dead on his cot, a bullet through his head.

Both before and after the killing of Lieutenant Smith, Ferguson and his men rampaged through the hospital and the grounds, slaying injured black troopers where they found them, as well as the white soldiers and officers with whom they served. Spying one wounded young white trooper crawling along the ground, Ferguson demanded to know why he had “come down there to fight with the damned niggers.” Ferguson drew his pistol and asked the hapless soldier, “Where will you have it, in the back or in the face?” The terrified youth was incoherent with pain and fear, so Ferguson peremptorily chose for him. 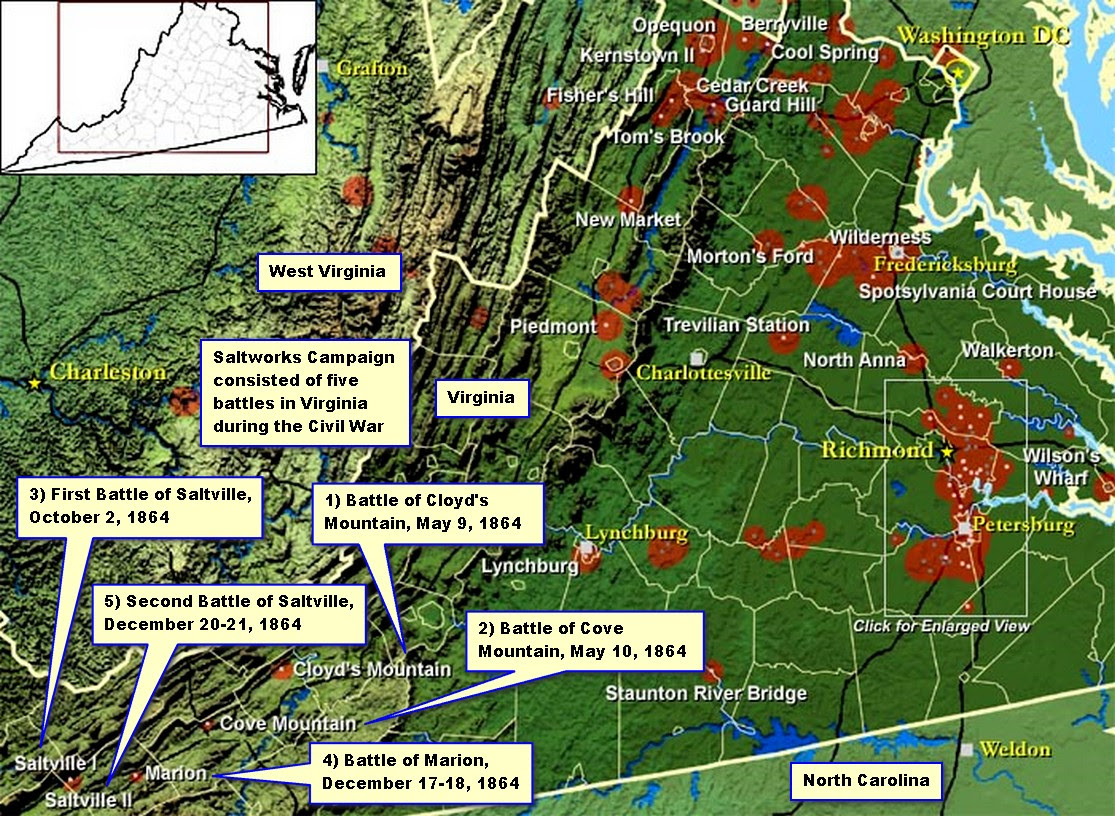 Modern historians have concluded that between 45 and 50 Union soldiers were murdered that day before another Confederate unit, the Thomas Legion of Cherokee Indians and Highlanders intervened to stop the slaughter.   The Saltville massacre reached the attention of Robert E Lee and other Confederate Army leaders who ordered Ferguson's arrest.  Although he was held for two months he was ultimately released.  For a detailed account of the massacre see this summary at southern studies.org.

A second raid on Saltville in December 1864 was successful, putting the works out of commission.

With the end of the war, Champ returned home apparently assuming the general pardon would apply to him but the Federal government had other plans and he was arrested, charged with 53 murders and went through a lengthy trial with 43 prosecution witnesses after which he was deservedly convicted and hung.