THC recently read Simon Sebag Montefiore's 2012 book, Jerusalem: The Biography.  I'd previously enjoyed Montefiore's splendid two-volume biography of Stalin; Young Stalin (2007) and The Court Of The Red Tsar (2003), the latter of which can be read as a stand alone and is the best portrait of Stalin as ruler.  Because Montefiore focuses on Stalin's day to day relationship with his inner circle (with its changing membership due to "attrition") the book captures not only the cruel logic (from Stalin's perspective) of his actions but conveys a sense of the pleasure he obtained from the malignant manipulation of those closest to him.  One example: when the wife of Poskrebyshev, Stalin's personal secretary, was arrested by the NKVD, Poskrebyshev begged for her release.  Stalin's response?  "Don't worry we'll find you another wife".  Unbeknown to Poskrebyshev, his wife was executed on Stalin's orders after two years in prison, though the dictator professed for years not to know her fate when Poskrebyshev inquired.

Jerusalem, unlike the Stalin books, is not an intimate portrait.  Rather it is a sweeping overview of the 3,000 year history of the city concluding with the 1967 reunification of a city divided since 1948.  The author also has a personal connection with the city as his great-great uncle was Sir Moses Montefiore who in the 19th century played a pivotal role in the revitalization of Jerusalem and his tale becomes part of the story told by his descendant.

The book opens with a quote from Benjamin Disraeli:  "The view of Jerusalem is the history of the world; it is more; it is the history of heaven and earth " and ends with one from Teddy Kollek, the long-time mayor of the reunited city after the Six Day War: "Everybody has two cities, his own and Jerusalem".  Montefiore announces his intent at the start:

"My aim here is to write the history of Jerusalem in its broadest sense for general readers  . . . without a political agenda . . .  I tell the story chronologically, through the lives of the mean and women- soldiers and prophets, poets and kings, peasants and musicians - and the families who made Jerusalem."


The author mostly succeeds in that aim, though his book is much more concerned with soldiers, prophets and kings than with peasants, day to day life over the centuries or the economics of the city during its existence.  Perhaps because of THC's familiarity with the Bible and Jewish history I found the most interesting parts of the book, and those from which I learned the most, to be those regarding the Byzantines, the Moslem Conquest and the Crusades and then the slow and steady decline of Jerusalem during the Ottoman centuries (1517-1918) followed by the European led revival beginning in the 19th century.
(19th century Jerusalem)
The only weak part of the book is the epilogue when Montefiore wades into the ongoing Israeli-Palestinian conflict and like many commentators runs aground when he fails to avoid the shoals of reality (along with making some factual errors on subjects such as the causes of the Second Intifada).  He indulges in the typical Western even handedness (aka "wishin' and hopin") and fails to understand what actually drives the parties.  For another example, see Fareed Zakaria in Masters Of Conventional Wisdom.  However, this is only a minor defect and THC recommends the book.

To give you an idea of the complexities of deciding the future of Jerusalem and also to correct some of the narratives about recent history please look at the map below which comes from Israel's Documented Story, the blog started by Yaacov Lozowick, the recently appointed chief archivist of the State of Israel. 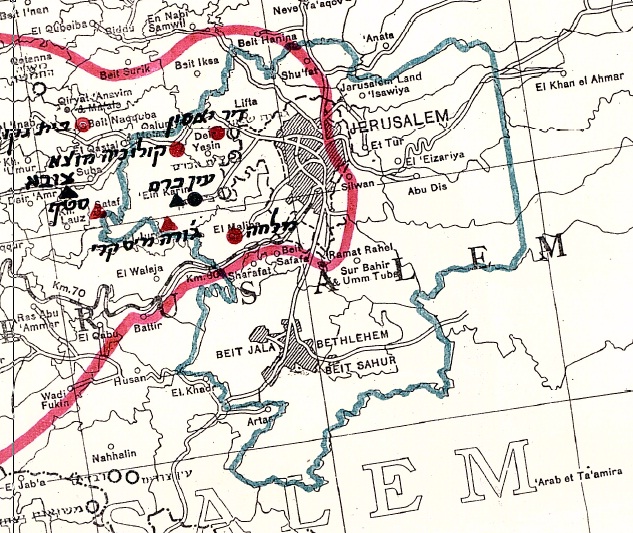 A little history before discussing the map.  The United Nations adopted a partition plan in November 1947 for the Palestine Mandate dividing most of the mandate into Jewish and Arab sections.  However, there was a third component, the Corpus Separandum, the area around Jerusalem, not given to either party and  intended to be an open-area under international supervision.  The boundaries of the Corpus are outlined in blue.  Note that it contains not only the city itself but the entire surrounding region, including the Town of Bethlehem.

When the partition plan went into effect in May 1948, despite its rejection by the Arab world, the new state of Israel was invaded by Eqypt, Jordan, Iraq, Lebanon and Syria which all vowed to wipe it out.  In the course of the 1948-9 war, most of the Corpus was occupied by Jordan, with Israel only retaining West Jerusalem and a corridor connecting it with the rest of Israel (the red line).  The portion captured by Jordan included the Old City of Jerusalem, containing the Jewish Quarter and the Temple Mount.  The Jordanians expelled the Jewish population, demolished all 58 synagogues and cemeteries of the Jewish Quarter, using the tombstones for road paving, and, for the next 19 years, Jews were denied all access to the Temple Mount and the Quarter. 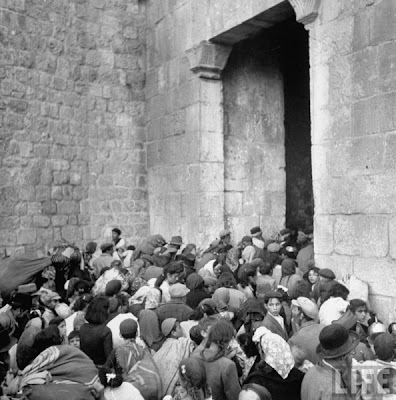 (Jewish families fleeing Jewish Quarter after surrender to Jordan, June 1948)  During this period, the UN did nothing to enforce the Corpus Separandum.  After Israel occupied the Old City in response to Jordan's attack on the Jewish State in the 1967 War, it turned over jurisdiction of the top of the Temple Mount, which houses the Al Aqsa Mosque and the Dome of the Rock, to Islamic religious authorities (the Waqf), allowed full access by Moslems to the site and restricted Jewish access. Today the Waqf and Palestinian authorities (as well as school textbooks) deny that there was ever a Jewish temple in Jerusalem.  It is very difficult to find a path to peace given the recent history.

There is also a geographical reality of Jerusalem as it exists today that makes division unlikely.  For more on this see Lozowick's posts (including maps and photos) from his former blog, Ruminations, including Nine Logical Outcomes From Dividing Jerusalem, most of which are not positive.
Posted by Mark Stoler at 4:30 AM