THC knows a bit about the Civil War but until his visit to Antietam last year, he did not know much about George S Greene (indulge us, THC is practicing his Ricky Henderson third-person thing ).  Greene performed admirably at Antietam but it is for what he did, 150 years ago today at Gettysburg, that he deserves remembrance. 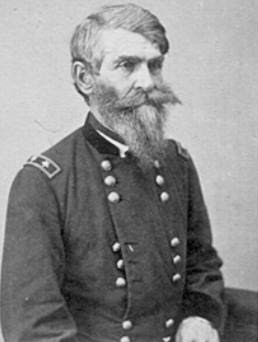 Born in 1801, Greene attended West Point, graduating second in his class.  He left the Army in 1836 to become a civil engineer, a career during which he built railroads in six states, designed water and sewer systems for several cities, including Detroit and Washington DC as well as the Croton Aqueduct for New York City.  He also helped found the American Society of Civil Engineers.

When the Civil War started, Greene volunteered despite being 60 years old, becoming one of the oldest officers in the war, and was initially appointed as Colonel of the 60th New York regiment.  In early 1862 he was promoted to Brigadier General and given command of a brigade, quickly gaining a reputation as an aggressive and effective officer (a characteristic in short supply in the Army of the Potomac).   At Antietam, Greene, who had been temporarily elevated to division commander, led his troops on the most successful Union attack of the day, making the deepest penetration of Confederate lines near the Dunker Church until forced to withdraw due to lack of support (a characteristic in abundant supply in the Army of the Potomac).

At Chancellorsville on May 3, 1863, Greene's brigade withstood furious rebel assaults and helped cover the withdrawal of Union forces.  The following month, the Army of Northern Virgina moved north in the campaign that climaxed with the Battle of Gettysburg (July 1-3).  They faced a new commander of the Army of the Potomac, George Meade, who President Lincoln appointed to replace Joe Hooker (see, A Dipsomaniacal Apathy) on June 28.

On the first day of battle, Lee's troops succeeded in outflanking the Union forces and capturing the town of Gettysburg.  That evening and into the next morning, more Union troops reached the field and established a line based on Cemetery Hill and Ridge and curling north around Culp's Hill to form what is referred to as "the fishhook".

Most of what happened on the afternoon and evening of July 2 is well-known.  At about 3:45 that afternoon, Lee launched an attack on Meade's left flank, which he thought was based on Cemetery Ridge. The next five hours gave birth to events that made previously unknown fields and hills and the names of soldiers and regiments familiar to generations of Americans; The Wheatfield, The Peach Orchard, Devil's Den, Little Round Top, the saga of Joshua Lawrence Chamberlain and the 20th Maine on the far left of the Union line and the sacrificial charge of the 1st Minnesota (see, The Last Full Measure).

But Lee's attack on the Union left was only part of the events that day.  He also ordered an attack on the Union right, based on Culp's Hill (the "hook" of the "fishhook").  This attack, launched hours after the left flank assault, had, as its goal, capture not only of the hill but the Baltimore Pike which lay 400 yards beyond it and was the main supply route for the Union Army.  Success would force the Union Army to withdraw and Lee's chances of success were enhanced because the desperate fighting to the south led Union General George Meade to order most of the troops in the area of Culp's Hill be sent to reinforce his left, leaving only five New York regiments (1,400 men) under General Greene to defend the hill.  Greene's troops had been ordered to the hill at 4am that morning. 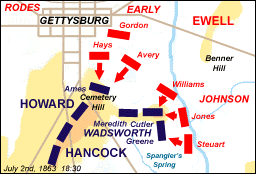 The Union defense was aided by two decisions Greene had made.  The first was to fortify his position when his troops arrived at the hill earlier that day.  At that point in the war, field fortifications were the exception, not the rule, but with his engineering background, Greene assessed the vulnerability of his position and directed the felling of trees and moving of boulders to improvise barricades (although some entrenchments had been dug by the Twelfth Corps, of which Greene was a part, the ground was too stony to do so systematically and effectively).  This was to prove invaluable when the Confederates attacked with an entire division, outnumbering Greene by three to one. 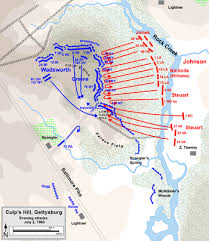 Greene's second decision was made after all the other Union troops had been removed from Culp's Hill and he was ordered "to occupy the whole of the intrenchments previously occupied by the . . . Corps".  Greene chose instead to abandon some of the entrenchments and concentrate his force in a smaller area and multiply its ability to focus its firepower.

The Confederate attack was led by General Edward Johnson's division and did not fully get underway until the sun was setting.  Most of Johnson's force charged uphill right into Greene's fortifications and concentrated firepower and were repulsed in repeated charges.  However, on Greene's right, Colonel David Ireland and the 137th New York regiment faced a challenge very much like Colonel Chamberlain and the 20th Maine had faced on the far left (David Ireland) earlier that afternoon.  Both regiments were at the ends of the Union line and if flanked, disaster would ensue.  The 137th ended up facing three attacking Confederate regiments.  As with Chamberlain, Ireland ordered his regiment to refuse the line to avoid outflanking but unlike Chamberlain he did not need to order a bayonet charge by the entire regiment but at one point, Captain Joseph Gregg of the 137th led a squad on a bayonet charge against the 10th Virgina to relieve the pressure of the continuing attacks.  While the charge was successful. Gregg was mortally wounded.(Joseph Gregg)

Finally, a number of regiments sent by Meade to reinforce Greene reached the hill and helped the line to hold throughout the night.

According to several sources, General Greene did not receive the credit he deserved for his actions on July 2 due to confusion in report writing by his superiors.

Following Gettysburg, Greene's brigade was among the troops transferred that fall to the Western Theater to help relieve the besieged Union forces in Chattanooga, Tennessee.  In late October, Greene was severely wounded in the face, losing several teeth and crushing his jaw, at the Battle of Wauhatchie.  Surgery was unable to fully correct his wounds, which troubled him for the rest of his life, but returned to action in January 1865 with General Sherman's army in North Carolina and had a horse shot out from under him at the Battle of Kinston in March.

After the war, Greene returned to engineering, serving as President of the American Society of Civil Engineers in the 1870s.  He remained active despite his wounds and it's reported that at age 86 he inspected the entire 30 mile structure of the Croton Aqueduct on foot.  In 1892 he petitioned Congress for an engineer captain's pension to help provide for his family after his death.  He finally obtained a pension as a first lieutenant, the highest rank he achieved in the pre-Civil War army.  In 1894, he was sworn in as a 93 year old first lieutenant, the oldest ever in the U.S. army, a rank he held for 48 hours in order to qualify for the pension.


You can read more about Greene in the New York Times obituary.
Posted by Mark Stoler at 4:30 AM