Lou, Tommy & Frank At The Hall

Today at the Baseball Hall Of Fame in Cooperstown, NY there will be two ceremonies with medical significance. The first is linked with the Hall's decision to honor two players who, for various reasons, never had an induction ceremony, Rogers Hornsby and Lou Gehrig.  Gehrig, one of the greatest ballplayers in history, was unable to attend his induction as a Hall of Fame member in 1939 because he was already too ill from the disease that finally killed him in 1941, amyotrophic lateral sclerosis (ALS) or, as it became known from then on, Lou Gehrig's Disease.  When THC was growing up, everyone referred to it as Gehrig's Disease and no one knew the other name for the disease.  Having Lou's name associated with it made it all the more personal to all of us and it made the illness all the more frightening - it must have taken something terrible to bring down a man like Gehrig who had the endurance to play every game over 13 straight seasons.  Even today, the ALS Association website carries the motto "Fighting Lou Gehrig's Disease" as a cure is still sought.

Gehrig may not have been able to attend his induction, but he did have the most famous farewell in baseball history at Yankee Stadium on July 4, 1939.
The second ceremony recognizes the contributions of Dr Frank Jobe to baseball.  Dr Jobe is the inventor of Tommy John surgery, and Tommy will be at Cooperstown to help honor the doctor.  In 1974, Dr Jobe was the team doctor for the Los Angeles Dodgers, when Dodgers' star hurler Tommy John tore the ulnar collateral ligament of his elbow in the middle of the season.(Dr Jobe)  Up until then, this injury was a career ender for a major league pitcher but Dr Jobe tried something new, replacing the ligament with a tendon from Tommy's leg.  John sat out the 1975 season but when he returned in 1976 he won ten games and 80 more over the four following seasons.  It was considered a miraculous comeback and it's why Tommy John's name became associated with the surgery. The significance of Dr Jobe's innovation goes way beyond the case of Tommy John. 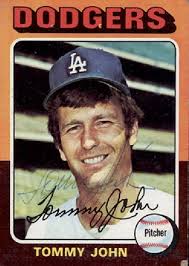 Since 1975 the surgery has been performed on more than 500 ballplayers and salvaged many careers.  Among those who've had the surgery are John Smoltz, David Wells, Adam Wainwright and the young phenom Stephen Strasburg.  Even Mariano Rivera had elbow surgery by Dr Jobe in 1992 before he made it to the majors though it involved the repair of his ligament not replacement.  THC was surprised to learn that 1/3 of current major league pitchers have had Tommy John Surgery and Dr Jobe certainly deserves the honor. 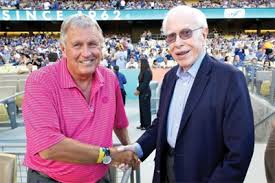 (John and Jobe)
Before the surgery, Tommy John won 124 games.  After the surgery he won 164, pitching until he was 46 years old.  Since 1900 only 17 pitchers have more career victories than Tommy John.  Before the surgery, John was a fastball pitcher.  After, he was a craftsman.  This short film tells the story of John and Dr Jobe.

THC still vividly remembers watching (on TV) Tommy John, by then a Yankee, pitch against the Red Sox in Fenway Park and via Baseball-Reference.com was able to find the exact date (May 20, 1979) and that the boxscore actually confirmed my recollections.   He completely dominated the Sox without a dominating fastball and solely by location of his pitches.