If you are a baseball fan, or even if you aren't but read THC, you know baseball revels in a history longer and more venerable than any other American game, and the proliferation of old news coverage, photos and the availability of statistical portraits make players from a century ago tangible presences today.

Earlier this year, Bryce Harper, the young Washington Nationals star outfielder, injured himself running into the centerfield wall trying to make a catch.  Harper is known for his high intensity all-out play and the injury prompted several sportswriters to write 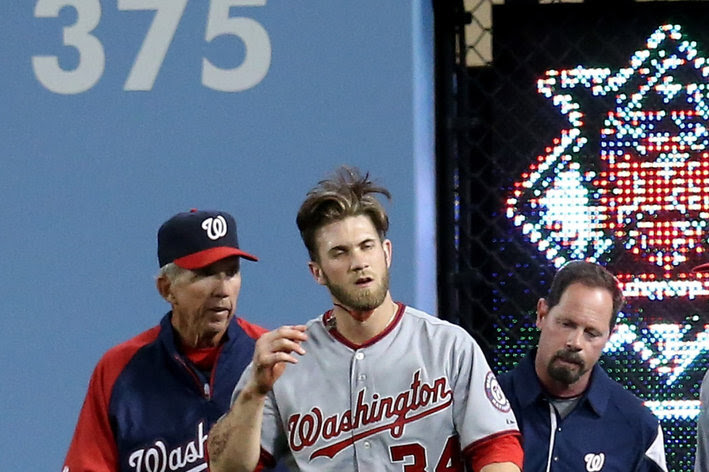 columns warning "Bryce Harper's all-out style could make him another Pete Reiser" [you can watch the collision at this link] and "Harper Can Learn From Pete Reiser".  These writers never saw Pete Reiser play - in fact, none of them had been born when Pete retired in 1952 - there is no widely-available film of his playing days or even photos of his greatest plays, yet he lives on in the memories of dedicated fans, remembered as a cautionary lesson for reckless ballplayers and as one of the great "what-ifs" in baseball history.

As his SABR biography says:

"Only a handful of people who saw Pete Reiser his prime are still around today. Those who did have two things in common: They remember when the Dodgers belonged to Brooklyn . . . and they cannot watch an athlete streak toward an outfield fence without feeling just a little sick to their stomachs. Pete was a five-feet-ten and a half inch, sinewy-strong 185-pounder who generated more speed, power, and pure energy than seemed physically possible from that modest frame. The only thing that could stop Pete was an unpadded stadium wall."

Pete, a St Louis kid, was signed in 1937 by Branch Rickey, GM of the Cardinals (and later as GM of the Dodgers, the man who signed Jackie Robinson), who was forced to give up many of his minor leaguers by Kennesaw Mountain Landis, the Baseball Commissioner.  Branch reached an agreement with his friend Dodger GM Larry McPhail, to park Reiser with the Brooklyn team and eventually get him back.  Pete came to Dodgers spring training in 1939 and in his first eleven plate appearances had eight hits (four of them homers) and three walks.  Manager Leo Durocher wanted to keep him on the team and was mystified when McPhail insisted on sending him to the minors, but Reiser continued to played so well McPhail was forced to sever the informal understanding with Rickey and keep the young phenom.

In 1941, the only season he played in more than 125 games, Pete dominated the National League leading in hitting (.343), doubles (39), triples (17), runs scored (117), slugging (.558) and slugging + on base % (OPS) at .964 and finishing second in the voting for Most Valuable Player, losing to teammate Dolph Camilli (by most modern measurements Reiser was more deserving of the MVP).  The Dodgers won the pennant, losing to the Yankees in the World Series (as they usually did).

1942 started as another outstanding year for Pete.  On the morning of July 18 he was hitting .356, slugging .531 with an OPS of .947.  The first place Dodgers had a doubleheader that day in St Louis against the second place Cardinals who trailed the Bums by 8 games.  The Dodgers lost the first game 8-5.  The second game went into extra innings tied 6-6.  In the bottom of the 11th, Enos (Country) Slaughter hit a long drive to centerfield over Reiser's head.  Running full tilt, Reiser and the ball reached the unpadded concrete wall at the same time.  Pete hit the wall head first and the ball popped out of his glove.  Getting quickly to his feet, Reiser fired the ball to the infield and the relay almost caught Slaughter at the plate but he completed an inside the park home run to win the game.  After the throw, Reiser collapsed unconscious with blood coming out his ears.  Reports of exactly what his injuries were are conflicting (he is reported variously as having a skull fracture and separated shoulder) but it is clear that, at the least, he suffered a severe concussion later saying he suffered dizzy spells and was seeing double for the rest of the season.

After the injury, Pete only hit .244 with little power the rest of the season and the Dodgers, though winning 104 games, lost the pennant to the Cards (who won 43 of their last 52 games) by two games.  The story I'd always heard was that Pete missed a lot of time after the injury and then never regained his bearings but he actually missed only 4 games, returning to action on July 25.  Durocher needed him back in the lineup with the Cardinals gaining ground - Leo never trusted his reserves and played his regulars into the ground (if you were a Cubs fan in 1969 you know exactly what I'm talking about).  At first, Pete seemed okay, hitting .300 in his next 80 at bats with 3 homers but then hit just .200 with no homers in his last 100 at bats.  Something was clearly wrong with him.  It was a disappointing ending for Reiser though he still finished 6th in the MVP voting and led the league in stolen bases.  If he'd kept hitting at his pre-injury pace he would have won another batting title and led the league in doubles, slugging and OPS for a second straight season.
(Leo (The Lip) Durocher)
With the season over and WWII on, Pete tried to enlist in the Navy but flunked his physical.  He was more successful with the Army in early 1943 (he somehow avoided having a proper physical) and spent the next three seasons in uniform.  While playing ball at Fort Riley, Kansas Pete had what he described as injury that most impacted his career:

"I plowed through a fence playing with Fort Riley, rolled down a 25-foot embankment and came up with a shoulder separation," Reiser said. "It wasn't as serious as the head injuries but it did more to end my career. The shoulder kept popping out of place, more bone chips developed, and there was constant pain in the arm and shoulder."


Reiser got off to a strong start upon his return to the Dodgers in 1946.  Through the first 77 games (as of July 13) he was hitting .323 with an OPS of .913.  Pete later said that his shoulder started acting up again, causing problems with his swing and he hit only .230 with little power over the rest of the season.  Oh, and he also fractured his fibula and ran into another wall, knocking himself out.  Despite the injuries he ran the bases with abandon, leading the league with 34 steals, including a record setting seven steals of home.

(Reiser stealing home)
The 1947 Dodgers team is the one on which Jackie Robinson made his debut (see 42).  In early June, Pete ran into the centerfield wall at Ebbets Field while chasing a fly ball in a game against the Pittsburgh Pirates and was once again knocked unconscious (this time he held onto the ball).  Carried to the clubhouse the story it is said he was given last rites before going to the hospital (difficult to confirm this widely told story).  Unlike the 1942 injury, the Dodgers kept him on the bench, then sending him to a neurologist at Johns Hopkins for examination and Pete ended up out of the lineup for six weeks. Despite missing 44 games, he hit .309, finishing second to Robinson in stolen bases, but he had little power and was losing his quickness in the outfield.  It was to be last year Pete was a regular starting player.

Reiser appeared in only 64 games for the Dodgers during 1948 and asked to be traded at the end of the season.  He played another four seasons with the Boston Braves, Pittsburgh Pirates and Cleveland Indians, never having more than 221 at bats in a season, retiring after the 1952 season.  According to one calculation, he was carried off the field eleven times during his career, six of them while unconscious.  Reiser never expressed any regrets about his style of play, saying it was what got him to the majors.

Though he had a short career as a player, Reiser had a long career in baseball.  As a coach for the Dodgers for a dozen years he mentored Maury Wills, who stole 104 bases in 1962 and gave Pete a lot of credit for the feat.  Later in the '60s Leo Durocher, then managing the Cubs, hired him as a coach and he later worked for the Angels and Phillies before retiring in 1981.

Leo Durocher always said that next to Willie Mays, Pete Reiser was the most talented player he ever managed: