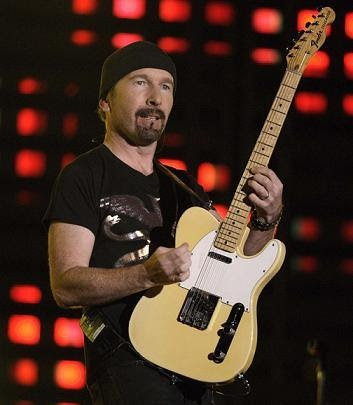 We've posted before about some of the great classic rock guitar soloists like Eric Clapton (Double Trouble), Jimi Hendrix (Heavy Guitar and Little Wing), Steve Ray Vaughn (Little Wing & Couldn't Stand The Weather), Jimmy Page (Since I've Been Loving You), Duane Allman and Dickie Betts (In Memory Of Elizabeth Reed) and the strange brew of guitarists constituting the Steely Dan players (the 3-part Steely Dan guitar solo series).  Now we'll turn to a favorite guitarist who THC doesn't consider a classic soloist; he's really more of a creative pattern and sonic structure builder - The Edge (real name David Evans) who joined the band that eventually became U2 as a 15-year old in 1976. There is another guitarist THC considers a bridge between the classics and The Edge and that is Pete Townsend of The Who.  Townsend is not one of the great soloist as his efforts can be choppy but he is the greatest rhythmic and power chord player in rock history (as well as a tremendously exciting live performer and improviser during his prime) and the inventor of the "crash chord" where you hit the chord and then mute the reverberations so it sounds quick like a shot with no ringing left hanging (in more recent years while on tour Townsend is letting his chords ring). Just listen to the opening chords of I Can't Explain.

As for The Edge it is all about the sound and patterns he devises.  He's the driving musical force in U2 and gives the band its trademark sound.  A U2 song is recognizable soon as you hear it because it has that brilliant, shimmering glassy guitar sound which gives a haunting feel to much of their music. The man has a great aural sense of how to complete the mood of a song.

Since it's difficult to find isolated guitar tracks by The Edge on YouTube we'll use some covers by others so you can hear the guitar clearly and learn how he creates the sound.  It's about the use of feedback delays (so you'll hear the note 2 or 3 times after it's played), reverb and compression along with a Herdim guitar pick turned the wrong way round so the scratchy part of the pick is hitting the strings.

Let's start with two covers by James Fernando.  The first is Where The Streets Have No Name from the mid-80s a song which has probably THE classic edgiest sound.  The second is Beautiful Day from around 2001 (which has a beautiful shimmering part at about 1:54).  Both videos have helpful captions explaining some of the technical setting and playing styles utilized.

Next up is a video which goes into some detail on the techniques used by The Edge to build his sound.

Crumbs From Your Table is from the 2006 album, How To Dismantle An Atomic Bomb.  THC loves the  sound of this cover!

We'll close with Pride (In The Name of Love).  This shows you what you can do with a simple guitar riff that ended up driving a majestic song.  Plus the guy playing it has a young son who clearly is not impressed with what's going on as he appears to be doing his homework.