Why Canada Is Not Part Of The United States

The two groups trudged through the darkness, under cover of a raging blizzard, footsteps muffled by the gathering snow.  They planned to approach the lower part of the town from opposite sides, meet in the center and then storm the upper town together, surprising the sleeping garrison.

The larger group met resistance in the lower town.  The dynamic and inspirational commander was wounded in the leg and carried off the field, but his subordinate led the remaining men into the upper town, where they then found themselves alone as the enemy troops rallied - where was the other contingent?

The smaller group, led by the overall commander of the little army, had encountered a blockhouse as they entered the lower town.  The outnumbered defenders fired a shot from their lone cannon, before retreating.  It hit the commander in the head, killing him instantly.  His command fell apart, and in the ensuing confusion most of the attackers were captured.  One of the few to escape was a future Vice President of the United States.

Abandoned in the upper town, the other group fought on, until surrounded and without hope of rescue, they surrendered.  It was all over.

It was the early morning hours of December 31, 1775.  The commander of the larger group was Benedict Arnold (see September 1780), his subordinate was Daniel Morgan, who after confinement on a British prison ship would be repatriated and then, five years later, demolish a British force at the pivotal Battle of Cowpens in South Carolina (see October 1780).  The dead commander was Richard Montgomery, and the officer who escaped was Aaron Burr, American's third Vice-President, the killer of Alexander Hamilton, organizer of a murky conspiracy to divide the newborn United States, and the reigning rogue and scoundrel of the early American Republic.

The invasion of Canada was born out of the early successes of the American rebels.  By the summer of 1775, the Continental Army, under newly appointed General George Washington, besieged the British in Boston.  In New York, Fort Ticonderoga, recently captured in a daring raid led by Ethan Allen and Arnold, protected the Hudson River Valley.  To the north lay Canada, a British bastion and potential launching point for invasion against the rebellious colonies.  The Americans were also aware that most Canadians were French Catholics who only became subjects of the British Protestants in 1763.  Out of these circumstances arose the idea of an American attack on Canada with the expectation that the French settlers would rise in support.

The Americans advanced on two fronts.  About 1,200 men under General Richard Montgomery left Fort Ticonderoga, heading north towards Montreal, which was captured in mid-November, reaching the area around the city of Quebec (capital of British Canada) on December 2.  Upon his arrival, he found Colonel Arnold and 600 ragged soldiers, survivors of one of the epic marches in American history.

Arnold set out on his expedition with 1100 men, and carrying orders from General Washington to allow freedom of conscience for Canadian Catholics;


"While we are Contending for own own Liberty, we should be very cautious of violating the Rights of Conscience in others; ever considering that God alone is the Judge of the Hearts of Men and to him only in this Case they are answerable", (see All Possess Alike Liberty of Conscience)

His expedition left Fort Western (now Augusta, Maine) on September 25.  One battalion, commanded by Captain Morgan, consisted of his well-trained Pennsylvania and Virginia riflemen.  Little was known of the wild, wooded and wet route to Quebec City from Maine.  Arnold thought it was less than 200 miles; it was actually 350.   For the next 45 days the expedition battled heavy rain, snow, flooding, cold, and starvation.  The survivors reached the St Lawrence River opposite Quebec on November 9.  The American portion of Arnold's route was added to the National Register of Historic Places in 1969, and you can find an excellent fictional retelling of the ordeal in Kenneth Roberts' Arundel (1938).

The combined American force was about 1,200.  The British, well-provisioned inside the fortified city, totalled about 1,500.  The Americans had little artillery, were ill-equipped for the winter, and the enlistments of Arnold's men expired on January 1. Knowing substantial British reinforcements would be arriving in the spring, Montgomery and Arnold decided to risk storming the city.

The snowstorm that started on the night of December 30, 1775 provided perfect cover for the American approach and they moved out around 4am the next morning.  Though the attack went awry, Benedict Arnold refused to raise the siege, maintaining it despite being outnumbered three to one and not leaving the Quebec area until early May of 1776, when reinforcements arrived from Britain.  Montreal was recaptured by the British from the retreating Americans the next month.

With the expedition's failure, America's dream of conquering (or liberating, depending on your perspective), Canada was ended; at least until it was revived, and again left unfulfilled, in the War of 1812.

The British attempted to move south into New York in the late summer and early fall of 1776 to take advantage of the disarray among the Americans.  Their plans were thwarted by Arnold, who oversaw the building from scratch of a fleet of American gunboats to be used on Lake Champlain, which he used to battle the British to a standstill at the Battle of Valcour Island in October 1776, delaying British plans for a further advance until 1777. 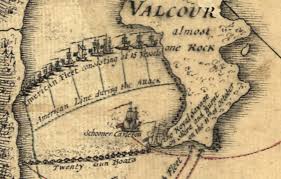 The Americans put the year they gained to good use, building a large army in the Albany area, and then defeating and capturing a British army commanded by Johnny Burgoyne.  Once again Benedict Arnold played a key role, rallying the Americans at a critical moment at the Second Battle of Saratoga and, once again, suffering a severe leg wound.  Riflemen commanded by the recently released Daniel Morgan, inflicted large casualties on the British forces in both Saratoga battles. The American victory led directly to the decision of the King of France to enter the war against England in support of the American rebels.

The Canada campaign contained quite a rogue's gallery on the American side.  In addition to Arnold and Burr, there was also James Wilkinson, who joined Arnold as an aide during his retreat from Quebec.  Wilkinson went on to become part of Horatio Gates' efforts to remove George Washington as commander of American forces, and later, as commander of the United States Army in the 1800s, was in cahoots with Burr in his conspiracy, while also serving as a spy for Spain (for more, read The General Was A Spy)!
Posted by Mark Stoler at 10:00 AM