Established pundits often write things that reflect the conventional wisdom - the stuff they say to each other over and over again in the circles in which they hang out.  After awhile they no longer think about it even if it no longer makes any sense.  Occasionally I'm going to feature examples of this phenomenon.

My first example is from Fareed Zakaria, who has rocketed to prominence in print and TV (he currently has a show on CNN that is, I believe, called "Fareed Zakaria: Look How Smart I Am"). 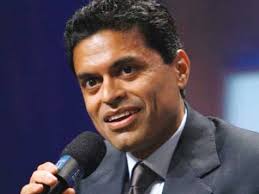 Zakaria had a recent opinion piece in the Washington Post entitled Israel Dominates The New Middle East.  Most of the essay is about the dominant position of Israel's conventional military power and I agree with the analysis - though he neatly avoids any discussion of Iran's nuclear program and its profound implications for this balance.

It's in his last paragraph that he goes completely off the rails by thoughtlessly spouting the conventional wisdom.  What makes this a great example is you can see the logical flaw within the actual sentences of the paragraph. See if you can spot it:

"These are the realities of the Middle East today. Israel’s astonishing economic growth, its technological prowess, its military preparedness and its tight relationship with the United States have set it a league apart from its Arab adversaries. Peace between the Palestinians and Israelis will come only when Israel decides that it wants to make peace. Wise Israeli politicians, from Ariel Sharon to Ehud Olmert to Ehud Barak, have wanted to take risks to make that peace because they have worried about Israel’s future as a Jewish and democratic state. This is what is in danger, not Israel’s existence."

Answer: It's in the second and third sentences.

Peace between the Palestinians and Israelis will come only when Israel decides that it wants to make peace.


In other words, peace is entirely in the Israeli's court, there is no obligation for the Palestinians.  This does reflect much of world opinion today and as well as elite American and European foreign policy opinion.

But then, he accidentally lets the cat out of the bag with his the next sentence:

Wise Israeli politicians, from Ariel Sharon to Ehud Olmert to Ehud Barak, have wanted to take risks to make that peace because they have worried about Israel’s future as a Jewish and democratic state.


So, according to Zakaria, three Israeli politicians from three different political parties over the course of a decade have wanted to take risks to make that peace.

Let's review those risks they took and what they got back in return.   Barak unilaterally withdrew from southern Lebanon and at Camp David (2000) and Taba (2001) offered a two state solution which was rejected without any attempt by the Palestinians for further negotiation.  In return, Israel got the Second Intifada, a series of horrific terror bombings and a Hezobollah terror state in southern Lebanon which launched a 2006 attack on Israel.  As an extra added bonus, Israel also learned that according to the Palestinians there never was a Jewish temple in Jerusalem.

Sharon unilaterally withdrew from Gaza and forceably removed thousands of Israeli settlers   In return Israel had thousands of rockets shot into its territory and a government in Gaza whose charter attacks the very existence of Israel and specifically denounces Jews everywhere.

In 2008, Olmert essentially reproposed the two state solution from Camp David and Taba.  He was simply ignored.

Since then, the Palestinian Authority has refused repeated offers by Israel to reopen negotiations.

Do you think that it's possible that perhaps it may actually take two parties to make a peace?

Did Zakaria actually read what he wrote?  If he read it, he certainly did not think about it.