Where Is The Real Mona Lisa?

If you thought it's in the Louvre in Paris, think again.  DaVinci's masterpiece is really in a private home in Queens, New York.  It's true - I saw it in a movie - The Freshman, a 1990 film starring Marlon Brando and Matthew Broderick, directed by Andrew Bergman who wrote the original screenplay for Blazing Saddles.

Matthew Broderick plays a kid from Vermont who has just arrived in New York to start his first year of college at NYU.  Marlon Brando plays - well, just watch the trailer for the movie and I think you can tell who he's playing, except that in this film they call him Carmine Sabatini and he plays the role impeccably.
Also in the cast are Penelope Ann Miller as Carmine's daughter, "the lovely Tina",

Bruno Kirby, and Maximilian Schell as Larry London, the operator of a very unusual gourmet eating experience.  Also featured is Paul Benedict as Professor Fleeber, a teacher of film history who is fixated on (what else?) The Godfather.

A very funny and eccentric movie with a star turn by a Komodo Dragon. 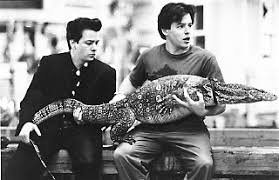 And here's a little more Brando from the film.
Posted by Mark Stoler at 5:30 AM

Email ThisBlogThis!Share to TwitterShare to FacebookShare to Pinterest
Labels: Movies